Supreme Court to decide whether pastor can touch inmate during execution

Defense attorneys have criticized the state of Texas' policy, saying that it forces John Ramirez's pastor during the execution to "stand in his little corner of the room like a potted plant." 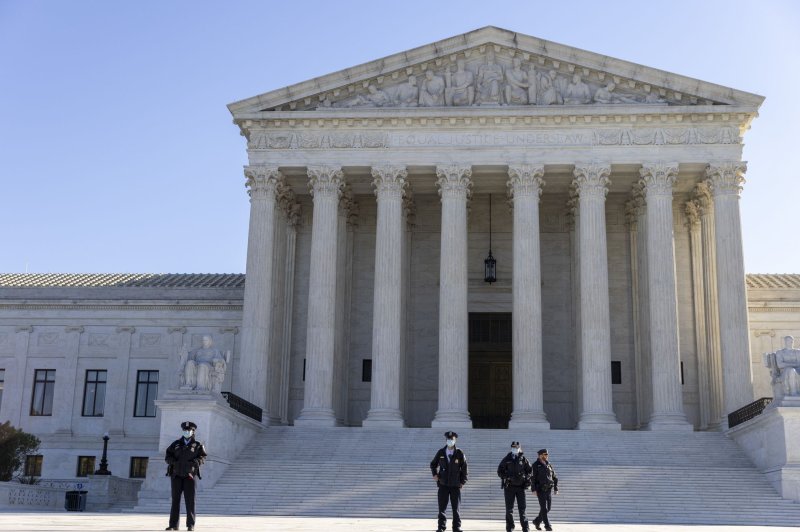 The U.S. Supreme Court will hear arguments on Tuesday in a death penalty case that could set a important precedent as to what spiritual advisers are allowed, or not allowed, to do to comfort inmates in the execution chamber. Photo by Tasos Katopodis/UPI | License Photo

Nov. 9 (UPI) -- The U.S. Supreme Court will hear arguments Tuesday in a death penalty case that could set a precedent as to what spiritual advisers in the United States are allowed, or not allowed, to do to comfort inmates in the execution chamber.

Justices will hear an appeal from attorneys representing death row inmate John Ramirez, whose execution in September was stayed at the last minute to give time for the high court to decide whether his Baptist pastor can touch him as the lethal drugs are administered.

Ramirez's attorneys are also appealing to the Supreme Court to allow the pastor to pray aloud in the death chamber. Both are barred by Texas rules.

Ramirez, 37, is condemned to die at the Texas Department of Corrections facility in Huntsville for the 2004 murder of convenience store worker Pablo Castro in Corpus Christi. He was scheduled to be executed on Sept. 8, but the high court granted a reprieve to evaluate the religious question.

In its decision to intercede two months ago, the Supreme Court said it seeks to determine what kinds of religious accommodations must be made available to death row inmates in their last moments.

Texas Department of Criminal Justice policy allows for a spiritual adviser, such as a pastor, to be with an inmate in the execution chamber -- but Ramirez wants his pastor, Dana Moore, to place his hands on him and pray aloud at the moment he is killed.

"Pastor Dana would touch me while I was still alive and breathing," Ramirez said of his wishes, according to The Washington Post. "I'd want him to feel my heart and feel when I transition."

Tuesday's arguments come two months after the 5th U.S. Circuit Court of Appeals denied Ramirez's requests. It said in its ruling that allowing the actual physical touching during execution could pose unnecessary risks.

"This is quite simply whether or not the state has to comply with laws protecting religious freedoms at the point and time that they put someone to death," Ramirez's attorney Seth Kretzer said, according to the Post.

Moore's presence would be important "not only for me, but for him," Ramirez has said.

"That's going to be a powerful testimony for him. I'm sure God will do something with that."

The attorneys wrote in an emergency petition to the Supreme Court in September, "The first problem is that under the TDCJ's most recent policy, Pastor Moore [may] not lay hands on Ramirez during his death. The second problem is that Pastor Moore may not pray, speak, read Scripture, move his lips or do anything at all.

"In other words, Pastor Moore is compelled to stand in his little corner of the room like a potted plant."

The state says its protocols protecting the "security, integrity and solemnity" of executions permit Moore to be present in the chamber -- as long as he remains quiet and does not touch Ramirez.

But it expresses concern about permitting the pastor to place his hands on Ramirez because it could pose a safety hazard to Moore or prison staffers.

Kretzer plans to argue before the Supreme Court that no precedent exists to say whether a spiritual adviser can touch a prisoner during execution.

"The job of a minister is not to stand still and be quiet. Prayer is very important. And the power of touch is real," he told TIME. "It's encouraging. It brings peace. It's significant. ... Why can't I hold his hand?"

The children of the man Ramirez killed almost 20 years ago have filed an amicus brief that says he and his legal team are pursuing the religious appeal simply to delay the execution.

"Pablo Castro's children -- and victims of violent crime across the nation -- deserve better," the brief states. "The suffering of Castro's family has been needlessly exacerbated by nearly decades of undue delays and manipulative, whipsaw litigation tactics."

U.S. News // 1 hour ago
46 migrants found dead inside tractor-trailer in San Antonio
June 27 (UPI) -- The bodies of 46 people were found Monday evening inside and around a tractor-trailer abandoned on the side of a road just outside of San Antonio, authorities and officials said.

U.S. News // 6 hours ago
3 dead, dozens injured in Amtrak train derailment in Missouri
June 27 (UPI) -- An Amtrak train collided with a dump truck and derailed near Mendon, Mo., on Monday, killing 3 people and injuring about 50 others. The train was traveling from Los Angeles to Chicago with 243 passengers on board.

U.S. News // 7 hours ago
Trump merger in question as federal grand jury subpoenas 'SPAC'
June 27 (UPI) -- An acquisition company planning to merge with former President Donald Trump's social media platform said Monday each of its board members have been subpoenaed by a federal grand jury.

U.S. News // 8 hours ago
Suspect arrested in fatal restaurant shooting over mayo on sandwich
June 27 (UPI) -- Police said Monday a suspect has been arrested in connection with the fatal shooting of an Atlanta shop employee, allegedly by a customer unhappy with the amount of mayonnaise in his sandwich.