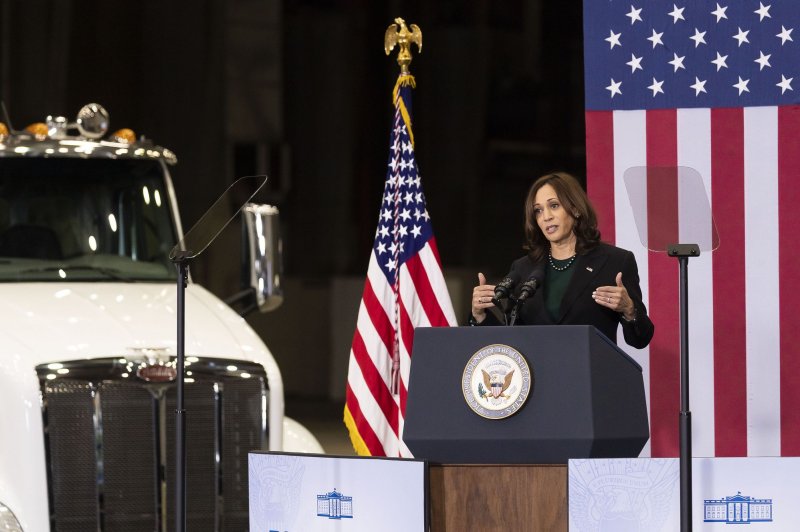 The pair appeared at JFK Airport to announce the commitment to fund 25 projects, including long-haul trucks powered by batteries and fuel cells and improving electric vehicle charging infrastructure in the United States.

"To meet our climate commitment, we must, we must, I say to my fellow Americans, put in the work," said Harris.

The Department of Energy noted that transportation makes up about 29% of carbon emissions, more than any other sector of the U.S. economy.

As part of the package, the Biden administration will provide a combined $127 million to five heavy vehicle manufacturers, including PACCAR Inc., Volvo, Daimler Trucks, Ford and General Motors.

"This investment and the innovations that come from it will help shape our clean energy future and strengthen domestic manufacturing that support good-paying careers for hardworking Americans," said Granholm.

BlocPower founder, Donnel Baird, said his company would work to remove gas and oil fixtures and replace them with an all-electric heating and cooling system.

"We need workers across America to learn how to install these things," said Baird. "They're going to save every building owner money. They're going to help us save the planet, because 30% of greenhouse gases in America come from our buildings."

The initiatives are part of President Joe Biden's Build Back Better plan, which continues to face opposition from moderates in Congress and in turn has held up a sweeping infrastructure bill that progressives refuse to approve without a commitment to the spending bill.

"This framework, together with the bipartisan infrastructure deal, represents the largest effort to combat climate change in our nation's history," said Harris.

Climate change already harming the health of many in U.S., report says

U.S. News // 12 hours ago
6 killed, more injured in New York bus crash
Jan. 29 (UPI) -- Six people are dead and another three are injured after a box truck and a bus collided head-on in New York.

U.S. News // 13 hours ago
Jewish family sues NYC's Guggenheim Museum seeking return of Picasso painting
Jan. 29 (UPI) -- A Jewish family has filed a lawsuit against the Guggenheim Museum in New York City seeking the repatriation of an iconic painting by Pablo Picasso that they allege was sold to allow the family to escape Nazi Germany.