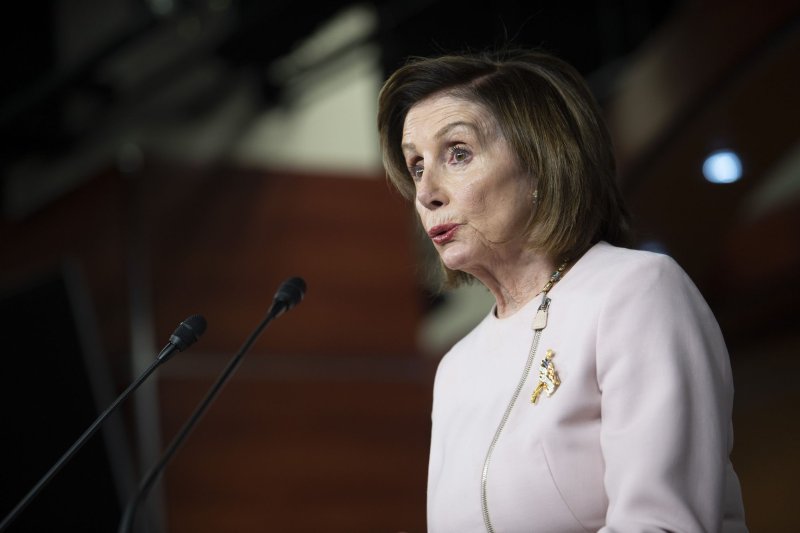 House Speaker Nancy Pelosi on Sunday said that 90% of a revised version of a sweeping social spending bill was "agreed to and written" as she expects a vote on the measure this week. Photo by Bonnie Cash/UPI | License Photo

Pelosi, D-Calif., told CNN's State of the Union Sunday that "90% of the bill" has been "agreed to and written" with a deal likely to come well before Biden departs for Europe at the end of the week.

"I think we're pretty much there now," she said. "It's just the language of it."

All 50 Democratic senators must support the sweeping social safety net legislation for it to pass through the reconciliation process and avoid a Republican filibuster but Manchin and Sen. Kyrsten Sinema, D-Ariz., have opposed the measure.

Manchin has stated he would not support a price tag greater than $1.5 trillion for the legislation which originally included $3.5 trillion in spending.

Negotiators in favor of the bill have sought to trim the legislation down to about $2 trillion by potentially sacrificing funds to support four weeks of paid family leave for workers and Medicare expansion for dental, vision and hearing.

"It is less than what was projected to begin with, but is still bigger than anything we've done in terms of addressing the needs of American working families," Pelosi said of the concessions on the overall cost of the bill.

Pelosi on Sunday said they were "fighting for" paid family leave to remain in the bill but noted that the dental expansion to Medicare is "very expensive."

"Dental will take a little longer to implement," she said. "We've been told by people who know about these things that it'll take five or six years in order to implement dental. So how do we, shall we say, fill in the blank there?"

The spending bill has also been tied to a $1.2 trillion bipartisan infrastructure bill as progressives have said they will not vote for the measure until a vote on the social safety net is secured.

Pelosi was optimistic that both measures would be put to a vote by the end of the week.

U.S. News // 2 hours ago
Kidnapped Texas woman reunited with family after 51 years
Nov. 29 (UPI) -- A woman who was kidnapped as an infant was reunited with her birth parents after more than 50 years, her family confirmed this week.

U.S. News // 6 hours ago
Biden encourages Congress to take up rail negotiations
Nov. 29 (UPI) -- President Joe Biden called on congressional leaders from both parties to work together Tuesday to avoid a rail strike that could cripple the economy in the middle of the holiday season.

U.S. News // 6 hours ago
Severe weather to threaten 40M from Texas to Illinois, Indiana
As a potent, multifaceted storm rolls out from the Rockies, severe weather ranging from high winds to tornadoes will be possible from the northwestern Gulf coast to the Mississippi Valley, meteorologists warn.