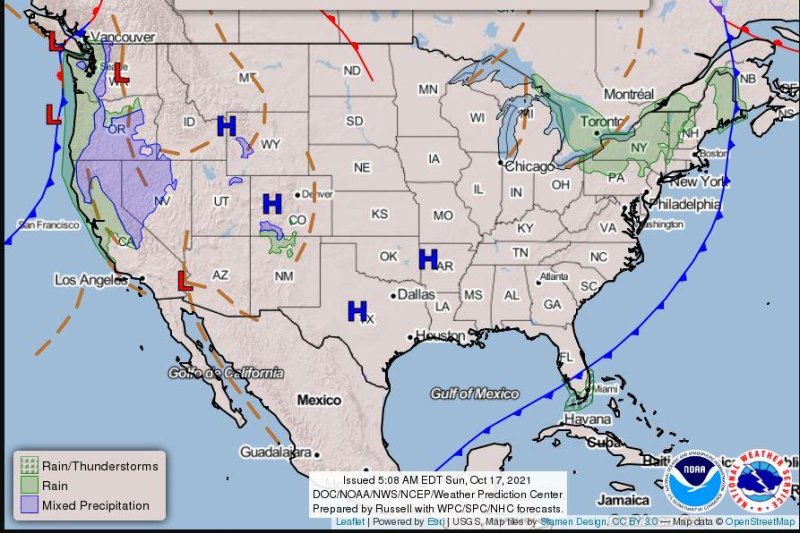 A flurry of storms are expected to march into the West Coast this week, bringing along a changeable mixture of rain, wind and snow for many places. While a dent in the ongoing drought is expected, it will come at a cost.

This week has already kicked off with a storm marching into the Pacific Northwest. The gray skies and spits of rain that are typical of autumn have led to a dreary end to the weekend along the Interstate 5 corridor across western Washington, Oregon and even Northern California.

While this storm isn't a drought-busting powerhouse of a storm, it has prompted winter weather advisories across the northern Sierra Nevada Mountain Range from Sunday evening into Monday morning. Snow levels are expected to drop low enough for a fresh coating of snow in places like South Lake Tahoe, Calif. Across the mountainous terrain above the lake, surrounding higher elevations above 7,000 feet can expect 3-6 inches of fresh powder.

Accompanying the snow, gusty winds will create headaches for travelers passing through Northern California's higher terrain. High-profile vehicles such as semis or RV's may need to keep both hands on the wheel when dealing with wind gusts in the 30- to 40-mph range.

RELATED Chilly weather may have Northeastern residents reaching for sweaters

The snow and wind will be rather short-lived across the Sierra, with snow tapering off through the day on Monday.

Attention will then shift across the Intermountain West through early week, as another round of mountain snow is in store.

Ski resorts across Utah's northern Wasatch Range, Uinta Mountains or Wyoming's Teton Range, Wind River Range, the Big Horn Mountains and the Laramie Mountains can expect to continue adding on to the snowpack, as another round of snow is slated to move in late Monday into Tuesday.

The heaviest snow -- which could be measured in feet rather than inches -- is expected to target the mountains of Wyoming through Tuesday night. A majority of the higher mountains and ski resort summits can expect a fresh 6-12 inches of snow, with an AccuWeather Local StormMax&trade of 2 feet on mountain peaks.

Snow may then extend eastward towards the Black Hills of South Dakota Tuesday night into Wednesday morning, but attention will begin to shift along the West Coast as another storm is set to move inland.

An extended fetch of moisture from the Pacific Ocean is anticipated to take aim at the West Coast by Wednesday. From the San Francisco Bay Area northward into Canada's Pacific Coast, another slug of rain and mountain snow is on the way.

RELATED With 6 weeks to go, hurricane season may be all but over

Wednesday may only be day one of a multi-day West Coast deluge. From the middle to late-week time period, the wildfire season across the Northwest and possibly even across Northern California may finally come to an end. With storms trekking across the Northwest in recent weeks, firefighters have been able to hold and/or make advancements along containment lines from ongoing fires.

The rain and snow will undoubtedly aid in firefighting efforts, however a new threat may arise as rain begins to fall on the recently scorched Earth. The charred ground and foliage now has a very limited ability to absorb rain, causing the newly fallen precipitation to quickly run off. Burnt silt and other debris from the burn scars can quickly turn into dangerous debris flows during episodes of heavy rain.

This may become a major concern across the Monument Fire burn scar area, the Dixie Fire burn scar, the Caldor Fire burn scar and many others spanning from Northern California the Northwest throughout the latter half of this week.

The exact forecast continues to be ironed out late week and into next weekend across the West, but it seems a series of storms is likely in store. From Wednesday through Friday along the West coast and throughout the Northwest, another potent storm will be possible moving quickly following in the foot steps of its predecessor marching ashore next weekend.

U.S. News // 7 hours ago
Christie's auctions 'Birth of Wikipedia' items, including NFT of 1st edit
Dec. 6 (UPI) -- Christie's this week is conducting an online auction entitled "The Birth of Wikipedia" in which a non-fungible token, or NFT, of the site's first edit is being offered for sale.