An anti-abortion activist holds a scroll outside the U,S. Supreme Court on the first day of their new term in Washington, D.C., on October 4. The court is considering a procedural question to allow Kentucky's attorney general to revive a defense of its abortion laws. Photo by Bonnie Cash/UPI | License Photo

The US Supreme Court on the first day of their new term in Washington, D.C., on October 4. Photo by Bonnie Cash/UPI | License Photo

Anti-abortion activists and supporters of legal abortion gather outside the U.S. Supreme Court on the first day of their new term in Washington, D.C., on October 4. The court is considering a procedural question to allow Kentucky's attorney general to revive a defense of its abortion laws. Photo by Bonnie Cash/UPI | License Photo

Oct. 12 (UPI) -- The U.S. Supreme Court signaled on Tuesday that it was inclined to allow Kentucky's Republican attorney general to revive a defense of the state's abortion restrictions previously struck down by lower courts.

The legal maneuvering stems from a Kentucky law enacted in 2018 that effectively bans after 15 weeks the most common abortion method used in the second trimester of pregnancy, The Hill reported. EMW Women's Surgical Center, the state's only abortion provider, challenged the law and a federal court struck it down in 2019.

While the court's decision was under appeal, Kentucky saw leadership changes following the 2019 election. Democrat Andy Beshear was elected governor after previously dropping a defense of the controversial law as the state's attorney general. In the same election, Republican Daniel Cameron was elected attorney general.

Cameron said that after a panel of judges at the Sixth Circuit Court of Appeals ruled against Kentucky's new abortion restrictions, "the governor's team decided to wash their hands of the case," reports Kentucky Today.

"Because I made it clear that our office would defend the laws passed by our General Assembly, we asked to intervene as the representative of the commonwealth," Cameron said. "The Sixth Circuit said, 'No.' But we weren't willing to take no for an answer."

After Beshear declined to continue the challenge, Cameron moved to intervene but was blocked by the federal appeals court who said his request was too late, CNN reported.

Currently, the Supreme Court is settling procedural questions concerning whether Cameron can take up the case and not the constitutionality of Kentucky's new law. During a hearing, justices from both the court's liberal and conservative wings directed pointed questions to the attorney for the abortion clinic, The Hill reported.

"That would be an extremely harsh jurisdictional rule, or at least a counterintuitive rule, if it ended up in a place where nobody was there to defend Kentucky's law, even though there are significant parts of Kentucky's government that still want its law defended," said Justice Elena Kagan, according to The Hill.

Justice Stephen Breyer suggested that Cameron should at least be able to make his case to the lower court, CNN reported. Chief Justice John Roberts said that even though the office of the attorney general said previously it would not defend the law that was "not necessarily" the "last word."

U.S. News // 57 minutes ago
Judge rules UNC can use race in admissions process
Oct. 19 (UPI) -- A federal judge has ruled that the University of North Carolina at Chapel Hill's use of race in its undergraduate admissions process is constitutional.

U.S. News // 7 hours ago
Zalmay Khalilzad resigns as U.S. envoy for Afghanistan
Oct. 18 (UPI) -- Ambassador Zalmay Khalilzad has resigned from his post as the United States lead diplomat to Afghanistan following the late summer exodus of the U.S. military from the war-torn country. 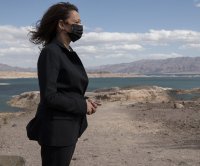