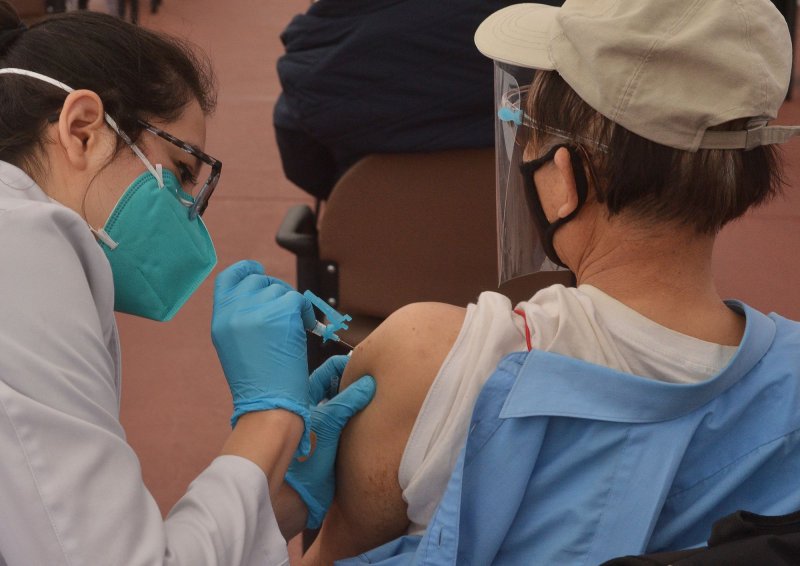 A judge in New York ruled the state must allow for religious exemptions from its vaccine mandate. File Photo by Jim Ruymen/UPI | License Photo

Oct. 12 (UPI) -- A federal judge on Tuesday ruled New York must allow healthcare workers exemption on religious grounds to the state's COVID-19 vaccine mandate while the order is litigated in court.

The preliminary injunction granted Tuesday by U.S. District Judge David Hurd of the U.S. District Court for the Northern District of New York prohibits the state from forcing employers to comply with a clause in the vaccine mandate that eliminates religious exemptions.

"The Department of Health is barred from interfering in any way with the granting of religious exemptions from COVID-19 vaccination going forward, or with the operation of exemptions already granted," Hurd wrote in his 27-page ruling.

The mandate was adopted by the Department of Health on Aug. 26, requiring healthcare workers to be vaccinated against the virus within 30 days, without an exemption intact for religious reasons.

In mid-September, 17 healthcare professionals employed by the state and who object to the COVID-19 vaccines on religious grounds sued New York, stating the lack of exemption violates their constitutional rights and federal law as the mandate forbids employers from considering workplace religious accommodations.

In his ruling, Hurd said the healthcare professionals are likely to succeed in court.

The 17 healthcare professionals said their religious beliefs prevented them from consenting to vaccines tested, developed or produced with fetal cell lines derived from procured abortions.

According to UCLA Health, the COVID-19 vaccines do not contain aborted fetal cells but the vaccines by Johnson & Johnson, Moderna and Pfizer used fetal cell lines.

Grown in a laboratory, fetal cell lines started with cells from elective abortions that occurred in the 1970s-80s, the healthcare network said on its website.

"With this decision the court rightly recognized that yesterday's 'front line heroes' in dealing with COVID cannot suddenly be treated as disease-carrying villains and kicked to the curb by the command of a state health bureaucracy," Christopher Ferrara, with the Thomas More Society and lead counsel for the healthcare workers in the case, said in a statement.

"My responsibility as governor is to protect the people of this state, and requiring healthcare workers to get vaccinated accomplishes that," she said in a statement. "I stand behind this mandate, and I will fight this decision in court to keep New Yorkers safe."

Hurd had issued an initial temporary restraining order barring Hochul and her administration from enforcing the rule on Sept. 14, which he then extended days later that was to expire on Tuesday.

U.S. News // 20 hours ago
Sixth Memphis police officer fired over Tyre Nichols beating
Feb. 4 (UPI) -- The Memphis Police Department has fired a sixth officer for conduct related to the beating of Tyre Nichols. Officer Preston Hemphill was seen using a Taser on Nichols in body-cam footage that was released.