He signed three proclamations securing the new protections during a ceremony on the White House's North Lawn, accompanied by Interior Secretary Deb Haaland, lawmakers, and dozens of tribal leaders, conservationists and environmental activists.

The orders restore -- and even add -- land to the Bears Ears and Grand Staircase-Escalante monuments in Utah, and Northeast Canyons and Seamounts National Monument in New England. Protections for all three locations were rolled back by former President Donald Trump.

"These protections provide a bridge to our past, but they also build a bridge to a safer, more sustainable future," Biden said. "One where we strengthen our economy and pass on a healthy planet to our children and grandchildren."

"It's on the same level as any kind of church or foundation or facility," he said. "It's very important to the lifeline of all nations and all people."

"The president's actions today write the new chapter that embraces Indigenous knowledge, ensures tribal leadership has a seat at the table and demonstrates that by working together, we can build a brighter future for us all."

The restoration in Northeast Canyons and Seamounts -- the first U.S. marine monuments in the Atlantic Ocean -- will return protections to sea canyons and underwater mountains near the New England coast.

Former President Barack Obama created the boundaries for the controversial Bears Ears monument in late 2016, but Trump scaled them back the following year. Trump, in fact, removed more than 2 million acres from the monuments in Utah.

Trump's scaling back federal protections opened up the lands, which are sacred to several Native American tribes, to mineral mining.

Sen. Mitt Romney, R-Utah, was critical of Biden's move Friday, saying the Utah monuments were being "used as a political football between administrations."

"The president squandered the opportunity to build consensus by working with stakeholders to find a permanent, legislative solution to resolve the longstanding dispute over the monuments' boundaries & management, which would've brought certainty to and benefited all stakeholders," he tweeted.

"Bears Ears Will Be Protected! We applaud expected Biden administration actions to restore protections for Bears Ears and its one-of-a-kind and sacred landscape," the Native American Rights Fund said in a statement.

"Bears Ears protections were established after years of negotiations, input, and advocacy on behalf of tribes, states, non-governmental organizations and the public. Those hard-earned protections were removed in 2017. The area subsequently saw a rash of exploitation and abuse by vandals, commercial interests and misinformed tourists."

Republican politicians in Utah oppose the move to restore protections to the monuments.

"The president's decision to enlarge the monuments again is a tragic missed opportunity. It fails to provide certainty as well as the funding for law enforcement, research, and other protections which the monuments need and which only Congressional action can offer." 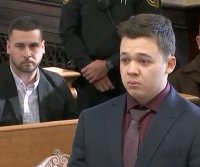 U.S. News // 24 minutes ago
Kyle Rittenhouse wants his rifle back, says it will be destroyed
Jan. 21 (UPI) -- On Jan. 28 Kenosha County Wisconsin Judge Bruce Schroeder will hear a request to return Kyle Rittenhouse's AR-15-style rifle. According to a court filing Rittenhouse's intent is to destroy the rifle.

U.S. News // 11 hours ago
U.S. charges 4 Belarusian officials with air piracy over diverting Ryanair flight
Jan. 20 (UPI) -- U.S. prosecutors have charged four Belarusian government officials with one count of aircraft piracy for their role in last summer's forced landing of a Ryanair flight for the purposes of arresting a dissident reporter.