Prosecutors said the fraudulent claims totaled about $3.9 million, of which $2.5 million was paid out. File Photo by Aaron M. Sprecher/UPI | License Photo

Oct. 7 (UPI) -- Federal prosecutors in New York said Thursday that they have charged 18 former NBA players with defrauding the league's health plan out of almost $4 million by filing a number of phony claims between 2017 and 2020.

According to the charges, the players submitted claims for various medical and dental expenses that were never performed and they were intended to defraud the NBA Players' Health and Welfare Benefit Plan.

A 19th person named in the indictment, Desiree Allen, was also charged with conspiracy.

Authorities said all but four of the defendants have been arrested. Anthony Allen, Douglas-Roberts, Smith and Robinson were still at large, they said.

Prosecutors said the fraudulent claims totaled about $3.9 million, of which $2.5 million was paid out.

"The defendants' playbook involved fraud and deception. Thanks to the hard work of our law enforcement partners, their alleged scheme has been disrupted and they will have to answer for their flagrant violations of law," Manhattan U.S. Attorney Audrey Strauss said in a statement.

The indictment names Williams as the leader of the scheme and prosecutors said he admitted recruiting other players into the scheme. He received at least $230,000 in payments from ten players for providing false documentation, they added.

RELATED 76ers' Doc Rivers on Ben Simmons: 'We would love to get Ben back'

U.S. News // 52 minutes ago
Canadian man missing after Cowboys game died in car crash, family says
Nov. 27 (UPI) -- A Canadian man who was listed as missing while visiting Texas for a Dallas Cowboys football game on Thanksgiving was killed in a car crash, his family said Saturday.

U.S. News // 17 hours ago
Multiple storms to keep flood risk high in Pacific Northwest
After months of heat waves and drought, weather in the Pacific Northwest has flipped completely to flooding rain and gusty storms.

U.S. News // 23 hours ago
Stocks fall to new lows Friday on news of emerging COVID-19 variant
Nov. 26 (UPI) -- News of a new and more dangerous strain of the coronavirus sent the stock market reeling Friday, where the Dow Jones, S&P 500 and Nasdaq Composite all posted the kind of losses they have not seen in months. 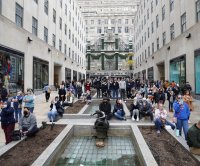