California synagogue shooter sentenced to life in prison without parole

John Earnest was sentenced to life in prison without parole on Thursday after he pleaded guilty to killing 60-year-old Lori Gilbert-Kaye, whose family is seen here, and injuring three others in a shooting at a California synagogue in 2019. File Photo by Ariana Drehsler/UPI | License Photo

Sept. 30 (UPI) -- The gunman who killed one person and three more in a shooting at a California synagogue in 2019 was sentenced to life in prison without parole Thursday.

Under a plea agreement accepted by San Diego Superior Court Judge Peter Deddeh in July, 22-year-old John T. Earnest avoided the death penalty but was sentenced to life in prison without parole plus 121 years to life and another 16 years in prison.

Earnest pleaded guilty earlier this month to a 113-count indictment of racial and religiously motivated crimes including the murder of one person and the attempted murders of 53 others in his attack on the Chabad of Poway synagogue on April 27, 2019.

He killed Lori Gilbert-Kaye, 60, while Rabbi Yisroel Goldstein had his right index finger shot off. Noya Dahan, then 8, and her uncle, Almog Peretz, were wounded in the shooting.

Gilbert-Kaye's daughter, Hannah Kaye, said she hoped her victim impact statement provided a picture of "what White supremacist, bigoted, racist violence looks, smells, sounds, feels and, yes, even tastes like in America in the 21st century -- two years ago and now."

"The voice of my mother is reclaimed with my own," she said. "John Earnest, your bullets will not wreck through my body today as they did my mother's. She is here. She is alive in my words ... You are unable to destroy the truth of my experience as much as you may want to."

Earnest also admitted to attempting to set fire to the Dar-ul-Arqam mosque in Escondido, Calif., because of his hatred of Muslims and the building's religious appearance. Seven missionaries were asleep in the mosque at the time, but no one was injured.

During Thursday's hearing, Earnest's attorney said his client wanted to make a statement but the judge refused.

"I don't want this to be a platform for him to make White supremacist or racist statements," Deddeh said. "I'm not going to let him use this platform to add to his celebrity." 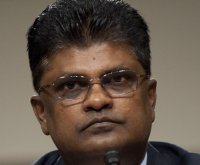