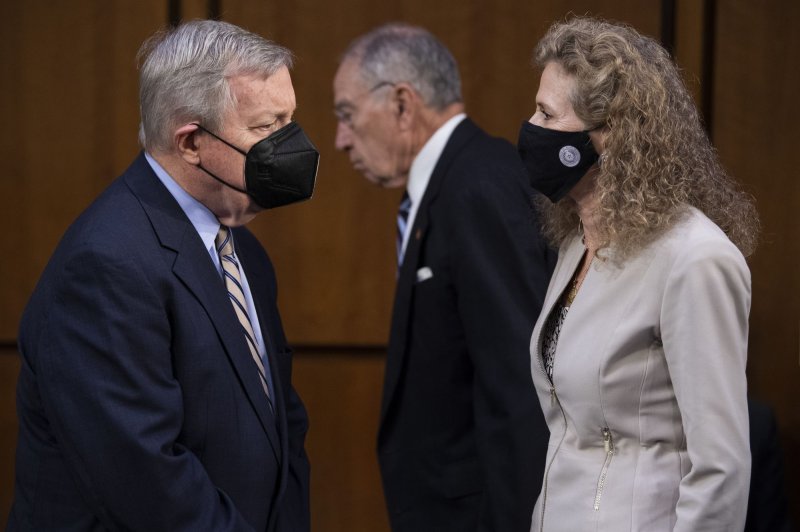 Sept. 29 (UPI) -- Senators held a hearing Wednesday to examine the U.S. Supreme Court's use of the so-called "shadow docket" in an inquiry that's focused on the court's decision not to block a controversial Texas abortion law that many legal scholars say is unconstitutional.

Senate judiciary Chairman Dick Durbin, D-Ill., accused the high court of making an ideologically driven ruling by making use of the shadow docket.

"The Supreme Court has now shown that it is willing to allow even facially unconstitutional laws to take effect when the laws align with certain ideological preferences," he said in prepared opening remarks.

"Constitutional rights for millions of Americans should not be stripped away in the dark of night, even at the Supreme Court ... It is already too late for many Texans whose rights have been suspended, and who have been forced to leave the state to seek reproductive health care the Constitution already guarantees them. But it is not too late for the rest of the country and the Court to change course."

Ranking member Chuck Grassley, R-Iowa, meanwhile, said the Supreme Court "did something very ordinary" with its ruling on the Texas abortion law.

"This campaign against the court and against individual justices has hurt the public," he said. "This dishonest rhetoric doesn't help the American people understand the issues."

The high court drew the ire of many earlier this month when the majority of justices declined to intervene and block the "heartbeat" law, which bans abortions after as few as six weeks -- whenever a fetal heartbeat can be detected.

The law also relies on the general public to enforce the law, allowing citizens to file lawsuits against anyone who seeks an abortion and anyone who aids them in that endeavor.

The Texas law is one of several nationwide passed by Republican-held legislatures in recent years in a bid to challenge the Supreme Court's landmark 1973 Roe vs. Wade ruling, which legalized abortion in the United States.

Abortion providers asked the Supreme Court to block the law in an emergency application, but the court voted 5-4 -- with an unsigned order -- to stay out of the issue.

The unsigned order is part of what's known as the "shadow docket," or a break from standard procedure under which the court, or a majority of justices, make rulings without explaining the reasoning behind them. The court also doesn't hear oral arguments and bases its decision solely on court filings.

Critics of the court's use of the shadow docket say it gives the court too much power, in that it allows justices to set legal precedent without sufficient review -- or having to explain why they're ruling in a certain way.

Liberal Justice Elena Kagan said in the Texas case that the majority's unsigned order "illustrates just how far the court's 'shadow-docket' decisions may depart from the usual principles of appellate process."

"In all these ways, the majority's decision is emblematic of too much of this court's shadow docket decision-making -- which every day becomes more un-reasoned, inconsistent, and impossible to defend," she added.

Supreme Court Chief Justice John Roberts, who joined liberal justices on the bench in the Texas case, said in dissent that he would have blocked the law while on appeal, making an argument that appears to go to the heart of the shadow docket.

"We are at this point asked to resolve these novel questions [about the Texas abortion law] at least preliminarily -- in the first instance, in the course of two days, without the benefit of consideration by the District Court or Court of Appeals," he wrote. "We are also asked to do so without ordinary merits briefing and without oral argument."

U.S. News // 9 hours ago
Serial killer identified by Denver police 40 years after murders of five women
Jan. 28 (UPI) -- A serial killer has been identified more than 40 years after he murdered three women and a pregnant teenager, as well as an Aurora police officer, the Denver Police Department announced Friday.