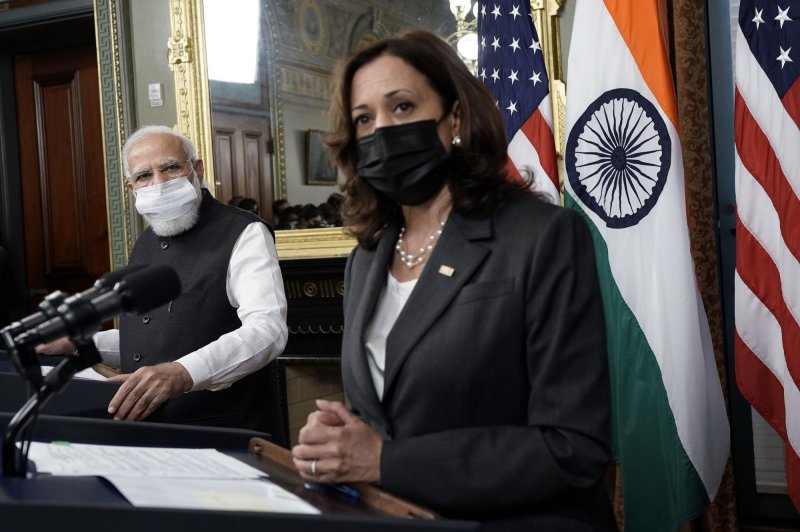 Modi hailed the election of Harris, whose mother was born in India, as "an important and historic event" describing her as "the source of inspiration for so many people across the world."

"President [Joe] Biden and yourself took up the leadership of the United States in a very challenging atmosphere, challenging times, but within a very short period of time you have had many achievements to your credit," Modi said.

He praised the United States for taking very important initiatives on COVID-19 and climate change.

Harris responded by hailing India's commitment to democracy as she declared that "democracies around the world are under threat" and the United States and its allies must work to defend them.

"I know from personal experience and from my family of the commitment of the Indian people to democracy, and the work that needs to be done, we can begin to imagine, and then actually achieve our vision for democratic principles and institutions," she said.

Harris also noted that India was a "vital source" of vaccines for other countries at the start of the pandemic, while the United States, in turn, provided support to India as it experienced a surge in cases.

Earlier in the day, Harris met with Ghana's president, Nana Akufo-Addo, where she said the United States will send an additional 1.3 million doses of Pfizer-BioNTech's COVID-19 vaccine to the country in coming weeks.

"None of us have been immune to the ravages of the pandemic," she said. "We recognize our shared responsibility to collaborate, to share resources to not only continue to address the effects of COVID-19, but to prepare for the next pandemics."

Akufo-Addo added that Ghana hopes to vaccinate 20 million people -- two-thirds of its population -- by the end of the year.

"We're grateful for the support that the United States government has given us in trying to deal with the virus, the COVAX facility, which America has been very strongly participant and the support we've had through the donation of 1.2 million doses of the Moderna and the promise that you've made that more is on the way."

U.S. News // 12 hours ago
Tuskegee Airman Charles McGee dies at age 102
Jan. 17 (UPI) -- Brig. Gen. Charles McGee, a decorated Air Force pilot and one of the last surviving members of the Tuskegee Airmen, the all Black squadron of World War II, has died. He was 102.