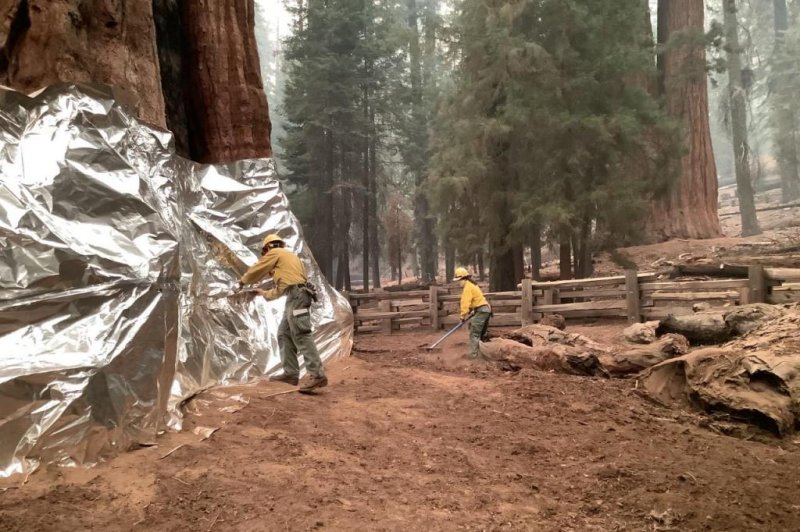 Made up of the Paradise Fire and the Colony Fire, KNP Complex Fire has burned a total of 17,857 acres and remained 0% contained, according to the National Park Service update on Saturday.

Earlier in the week, California's Sequoia National Park closed and evacuated employees from facilities as the pair of wildfires advanced on the area.

The Sequoia National Park's Giant Forest is home to more than 2,000 giant sequoias, including the General Sherman Tree, the largest tree on Earth by volume, according to the service.

The fire reached a small area of the Giant Forest on Friday known as the "Four Guardsmen," where trees have been wrapped in heat-resistant material. The General Sherman Tree has not seen fire and Hotshot Crews are assessing the ground to see if conditions are stable enough for crews to engage the area.

Airflow increased Friday afternoon causing the fire to pick up significantly, according to the National Parks Service. As of Saturday morning, the fire was in the vicinity of the Red Fir maintenance area.

The fire's southern end has been more moderate and has not grown significantly in the direction of the Three Rivers or park headquarters.

Elsewhere in California, the Caldor Fire is 71% contained as firefighters have strengthened control and containment lines on the 218,876-acre blaze east of Sacramento. Crews are also patrolling contained areas and responding to calls from residents who have returned home.

"Weather will be a challenge for firefighters over the next couple of days as we enter a Fire Weather Watch on Saturday," the Eldorado National Forest said in its update. "Winds over the fire will begin to increase today with ridgetop winds from 13 to 18 mph and 20 to 25 mph tomorrow with gusts up to 35 mph."

The Dixie Fire is 88% contained. The fire encompasses 960,641 acres and spans five California counties as well as Plumas National Forest, Lassen National Forest and Lassen Volcanic National Park. The Dixie Fire may see moderate activity on Saturday as southwest winds blow over fire before precipitation is expected this evening.

U.S. News // 16 minutes ago
COVID-19 cases unreported in largest meatpacking companies, probe finds
Keeping lax safety standards across the U.S. meatpacking industry was a "political decision" by the Trump administration, according to the House Select Subcommittee on the Coronavirus Crisis.