Gen. Frank McKenzie of the U.S. Central Command said the military, in a "tragic mistake," believed a civilian vehicle was associated with the militant group behind an explosion at the Hamid Karzai International Airport in Kabul that killed dozens of civilians and 13 U.S. troops Aug. 26.

ISIS-K, an offshoot of the Islamic State active in the historic Khorasan region, claimed responsibility for the attack, drawing promises of retaliation from U.S. President Joe Biden.

"This strike was taken in the earnest belief that it would prevent an imminent threat to our forces in the evacuees at the airport, but it was a mistake, and I offer my sincere apology," McKenzie said. "As the combatant commander, I am fully responsible for the strike and this tragic outcome."

The U.S. military carried out the airstrike Aug. 29 and initially reported it killed at least one ISIS-K militant and eliminated a threat on the airport, which the Taliban renamed Kabul International Airport after taking over the capital.

The Pentagon believed the driver of the vehicle, Zemari Ahmadi, was involved with ISIS-K and had explosives in his vehicle. Defense Secretary Lloyd Austin III said, though, that Ahmadi was not linked to the terror group and instead worked for Nutrition and Education International, an aid group.

Austin offered his condolences to the victims' families and said he hopes the Defense Department will "learn from this horrible mistake."

"We now know that there was no connection between Mr. Ahmadi and ISIS-Khorasan, that his activities on that day were completely harmless and not at all related to the imminent threat we believed we faced, and that Mr. Ahmadi was just as innocent a victim as were the others tragically killed," he said.

Austin added that he's ordered a review of the investigation into the airstrike to ensure that appropriate accountability measures are taken.

The U.S. military launched a series of retaliatory attacks on ISIS-K targets in the days after the Aug. 26 attack on the airport. The violence came amid the United States' effort to evacuate citizens and Afghan civilians who had helped the U.S. military.

The Taliban quickly took control over Afghanistan during the United States' troop withdrawal from the country, sparking the mass evacuations, which concluded Aug. 31.

U.S. News // 14 minutes ago
President Joe Biden awards Public Safety Officer Medals of Valor
May 16 (UPI) -- President Biden awarded Medals of Valor to 15 public safety officers in a White House ceremony Monday. The officers, including two who died in the line of duty, were honored for individual acts of bravery. 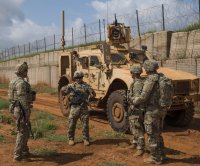 U.S. News // 1 hour ago
Florida passenger who landed plane after pilot passed out says he had to 'do or die'
May 16 (UPI) -- A Florida man who was forced to take over the controls of a small airplane last week, after the pilot had a medical emergency mid-flight, says that he did what he did because he didn't have a choice.

U.S. News // 2 hours ago
Trial of Michael Sussmann begins in probe of Russia investigation
May 16 (UPI) -- Michael Sussmann, a former partner at law firm Perkins Coie retained by Hillary Clinton's presidential campaign in 2016, will head to court Monday for a trial on a charge of lying to the FBI. 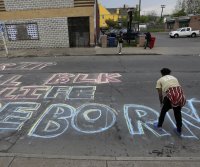 U.S. News // 3 hours ago
Buffalo shooting: Police say 18-year-old gunman planned longer rampage
May 16 (UPI) -- The man who was arrested over the weekend for killing 10 people in a mass shooting at a supermarket in Buffalo, N.Y., would have continued his rampage if he hadn't been stopped by authorities, officials said Monday.

U.S. News // 4 hours ago
Supreme Court returns to issue rulings for first time since leak in Miss. abortion case
May 16 (UPI) -- The Supreme Court was expected to issue orders and opinions on Monday for the first time since the rare leak of one opinion that indicates the court is planning to overturn the landmark abortion decision in Roe vs. Wade.
Advertisement