After lifting its ban on recreational marijuana in 2018, Ontario, Ore., had seen an influx of visitors via Interstate 84 from nearby Idaho (where the drug remains illegal). Photo by Ken Lund/Creative Commons

After lifting its ban on recreational marijuana in 2018, Ontario had seen an influx of visitors from nearby Idaho (where the drug remains illegal). Malheur County, a sparsely populated and economically depressed area home to Ontario, has since consistently seen some of Oregon's highest cannabis sales. Last year, Ontario's 14 retailers generated over $100 million in sales, boosting the town's tax revenue.

Ontario City Manager Adam Brown said the town plans to spend its cannabis tax revenue on making it a more attractive place for new residents and businesses. That means funding for improved lighting and fiber Internet connections downtown, better roads and a 3-D mural at a local park.

"We could really make this city shine," Brown said. "We could make it attractive for the kids who say there is nothing for them here."

But Ontario, along with cities across Oregon, will have a harder time realizing their plans because of a shift in how the state distributes cannabis tax revenue.

The change was brought by Measure 110, a ballot initiative voters passed in November that decriminalized possession of small amounts of hard drugs and replaced incarceration with treatment. Funding that treatment limited how much cannabis tax revenue cities can keep.

Of the 19 states with legal recreational cannabis, Alaska, California, Massachusetts, New York, Oregon and Virginia allow local governments to tax the drug, according to the Urban Institute.

Many of these states have seen ongoing debates over how high cannabis taxes should be and how the money should be spent. But Oregon has implemented a sudden and significant reordering of how it spends tax revenue from an industry that topped $1 billion in sales for the first time last year.

Mark Gharst, lobbyist for the League of Oregon Cities, questioned if voters understood that Measure 110 would drain money for city services when they approved it.

"We're very concerned," Gharst said. "It's disappointing, and it really matters to our cities that they provide services that our residents demand."

Oregon cannabis retailers charge a state sales tax of 17%. The tax is collected by local governments and a portion is sent back to them.

Before Measure 110, cities would have received $37.7 million in Oregon's current two-year budget, Gharst said. But now they'll only receive $9 million -- a 73% drop.

Megan Chuinard, public affairs associate for the Association of Oregon Counties, said counties are expecting a similar loss that will increase as all growth in cannabis tax revenue goes to drug treatment.

Brown said Ontario's annual share of state cannabis tax revenue was already meager, receiving about $70,000 from the $1.7 million the city collected. The share is based on population, which Brown says doesn't account for the 1,500 trips Ontario sees each day from Idaho residents who use roads and other city services.

Ontario's current budget anticipates $3 million in cannabis tax revenue. Brown said the city saw a 10% drop in revenue last quarter, which he said could be due to the market slowing after reaching record sales during the pandemic.

In addition to the state tax, cities can charge a 3% local tax, which has been Ontario's biggest driver of revenue over the last two years.

Lawmakers took note of Ontario's situation and other cities during Oregon's last legislative session. They introduced a bill allowing them to increase the local tax to 10%.

While the bill would have kept the cannabis tax rates lower than neighboring Washington and California, it ended up stalling.

State Sen. Floyd Prozanski, D-Eugene, spoke against the bill when it came up for a vote in June. He pointed out that when voters legalized marijuana in 2014 they were told tax revenue generated from it would be used specifically for schools and public safety, as well as drug abuse treatment and prevention.

The way the money was being used had drifted far from those purposes, he said. 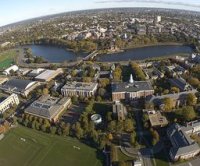