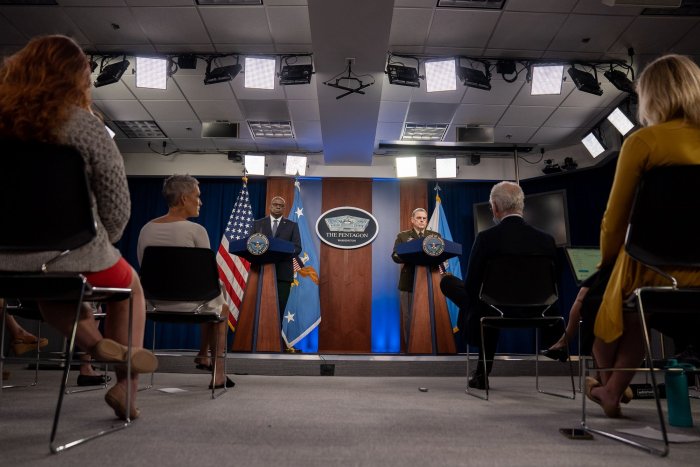 Sept. 8 (UPI) -- U.S. Secretary of State Antony Blinken rejected the notion that the Taliban were holding Americans on grounded flights in northern Afghanistan hostage but said the planes were being prevented from departing as some passengers lack proper travel documents.

Blinken in Doha, Qatar, on Tuesday told reporters during a press conference that they have identified a small number of U.S. citizens who are seeking to depart from Mazar-e-Sharif airport with their families but have been unable to leave as some on board lack travel papers.

"As we understand it, there are groups of people who are grouped together, some of whom have the appropriate travel documents -- an American passport, a green card, a visa -- and others don't," he said, adding, "we are not aware of anyone being held on an aircraft or any hostage-like situation at Mazar-e-Sharif."

The Taliban, he said, have denied exit only to those who lack the proper travel documents with the issue being they are grouped together with those who do have the proper documents.

"Because all of these people are grouped together, that's meant that flights have not been allowed to go," he said, adding that the Taliban have assured them that all Americans and Afghans with valid travel documents will be allowed to leave.

"And again, we intend to hold the Taliban to that," he said.

The announcement came after the State Department said Monday that it helped get four American citizens out of the country using an overland route, seemingly the first time Americans have left the country since the last U.S. troops departed at the end of August.

The United States evacuated some 124,000 people, including 6,000 Americans, from the country amid its airlift operation ahead of its military withdrawal deadline and as the Taliban seized control of the country.

"We are working to get every single American citizen and any individual who has documentation out of the country," she said.

She added a problem is that there is no U.S. diplomatic office on the ground anymore to verify information.

"While we are in touch with American citizens directly, beyond that, we don't have an assessment of manifests, what security protocols and measures are taken," she said. "So there is a range of issues that we're working through."

She also rejected the notion that they were being held "hostage," which Rep. Michael McCaul, R-Texas, described the situation as on Fox News Sunday.

McCaul said the Taliban were holding six flights hostage "until they get the full recognition from the United States of America."

"That is not what we would characterize it as," Psaki said. "What we have seen is individuals who have documentation are able to depart -- that is what we have seen. But again, we don't have a great deal of understanding of every individual on these manifests."

On Monday, Sen. Richard Blumenthal, D-Conn., said he was "deeply frustrated, even furious" with the Biden administration's delay and inaction to get the remaining Americans out of Afghanistan.

He said he and his staff hav been working to secure safe passage for two planes waiting at Mazar-e-Sharif airport.

"For now, my singular focus remains getting these planes in the air & safely to our airbase in Doha, where they have already been cleared to land," he said. "I expect the White House & State Department to do everything in their power -- absolutely everything -- to make this happen."

U.S. News // 9 hours ago
Sixth Memphis police officer fired over Tyre Nichols beating
Feb. 4 (UPI) -- The Memphis Police Department has fired a sixth officer for conduct related to the beating of Tyre Nichols. Officer Preston Hemphill was seen using a Taser on Nichols in body-cam footage that was released.