Roseville fire fighter Kirk Steven monitors the fire line as he allows fuel to be burned off next to a cabin during the Caldor Fire near Meyers, Calif., on Tuesday. Photo by Peter DaSilva/UPI | License Photo

Sept. 2 (UPI) -- California's Caldor Fire is nearing the Nevada border and Lake Tahoe on Thursday and has now burned more than 200,000 acres and hundreds of structures, fire authorities said.

The California Department of Forestry and Fire Protection said the fire is stretching across the Eldorado National Forest toward South Lake Tahoe. The fire, which started on Aug. 14, has burned 208,000 acres and destroyed about 800 structures.

In its most recent update, Cal Fire said the blaze was 23% contained.

"Firefighters were challenged [Wednesday] by dry conditions and strong winds," Cal Fire said in a statement. "These strong winds increased fire behavior dramatically along the northern area of the fire this morning. This evening crews will look for opportunities to build control line were possible."

Authorities are issuing more evacuation orders ahead of the growing fire. Officials ordered 22,000 residents of South Lake Tahoe to evacuate on Monday and similar orders followed for Douglas County a day later.

The MontBleu, one of the Reno area's largest casino hotels, has closed its doors due to the fire.

"[The MontBleu] will continue to provide housing and support to team member evacuees and firefighters working hard to contain the Caldor Fire, as well as remain in constant communication with the Stateline fire department," MontBleu General Manager Tim Tretton said, according to the Sacramento Bee.

Many other casino hotels which dot the Lake Tahoe area had already closed, the Nevada Gaming Control Board said.

Lake Tahoe public utility officials warned evacuating residents against leaving their irrigation systems, garden hoses and sprinklers on as they leave. Authorities said doing so does not protect their property and often leaves firefighters with inadequate water supplies.

At Heavenly Mountain ski resort, employees used the resort's large snowmaking machines to shoot water on buildings and soak the area in a bid to ward off the flames. Heavenly is Lake Tahoe's largest ski area.

U.S. News // 18 minutes ago
Figures show U.S. economy grew by almost 6% in 2021 -- largest yearly gain since 1984
Jan. 27 (UPI) -- The U.S. economy saw substantial growth in the final three months of 2021 -- and, for the entire year, saw the largest expansion in almost 40 years, the Commerce Department said in a highly anticipated report Thursday. 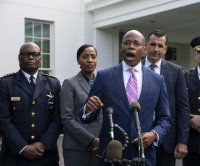 U.S. News // 44 minutes ago
Biden to visit NYC next week, meet with Mayor Eric Adams to talk about gun violence
Jan. 27 (UPI) -- President Joe Biden will travel to New York City next week to meet with new Mayor Eric Adams, the White House said -- and part of the reason for the visit is to discuss gun violence.

U.S. News // 10 hours ago
U.S. warns of heightened businesses risks in Myanmar
Jan. 26 (UPI) -- Ahead of the one-year anniversary of the military seizing control of Myanmar in a coup, the Biden administration is warning Americans about the heightened-risk of doing in business in Asian nation.
Advertisement