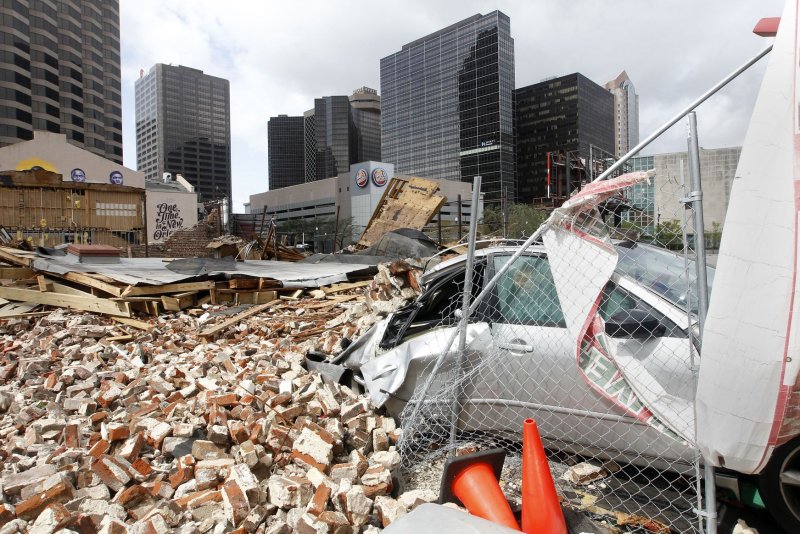 A building in downtown New Orleans was destroyed by Hurricane Ida. Power was out across the city Monday. Photo by AJ Sisco/UPI | License Photo

Aug. 30 (UPI) -- New Orleans officials urged residents who fled ahead of Hurricane Ida to stay away Monday as President Joe Biden pledged vast federal support to the relief effort that sees emergency crews scramble to restore power to thousands of homes and businesses.

"If you have evacuated out of [New Orleans], we request that you DO NOT RETURN until further notice," the city's emergency management office pleaded in a Twitter post. "There is widespread debris, power remains out, and emergency services are working to respond to those still in the city. We will let you know when it is safe to come home."

Cantrell said that while the city dodged the kind of widespread damage seen 16 years ago when Hurricane Katrina devastated the area, "now is not the time for re-entry" for those who evacuated.

"Today is going to be a day for assessment across the board," she said. "We are only at the beginning of that process of determining what the actual impacts have been across the city of New Orleans."

Louisiana Gov. John Edwards in a press conference also told residents who evacuated to not return until their parish tells them it is safe to do so.

Deanna Rodriguez, president and CEO of Entergy New Orleans, told reporters that more than 880,000 of the utility's customers throughout Louisiana remained without power, down from an estimated 1 million in the hours after Ida struck.

She could not provide a timetable for restoring service.

In a statement, Entergy warned that some residents could be without power for weeks.

"Customers in the direct path of a storm as intense as Hurricane Ida could experience outages for more than three weeks," the company said. "While 90% of customers will be restored sooner, customers in the hardest-hit areas should plan for the possibility for experiencing extended power outages."

"It's not just New Orleans, but all the southern parishes in Louisiana are experiencing an issue," he said, explaining the system's call routing infrastructure has suffered "significant damage."

"Our partners at AT&T are working around the clock to diagnose and recover those services," he said. "Until that point, it is not safe for those who left the city to return."

In nearby Jefferson Parish, officials warned that residents are facing lengthy spans without power and water and announced they are working with state officials to bus residents out of the area if they can't leave on their own.

The parish issued a boil water advisory for Grand Isle, La., and its entire West Bank area due to the loss of pressure in the water distribution system. It is also under a mandatory curfew until at least 6 a.m. Tuesday.

In a call with state and local officials, Biden vowed federal support.

"We're there to help you get back on your feet," he said. "We're going to stand with you and the people of the Gulf as long as it takes for you to recover."

The White House said in a statement that 5,200 National Guardsmen in Louisiana, Mississippi, Texas and Alabama have been activated in the response effort while another 25,000 line and tree crews from at least 30 states were en route to help with the restoration of local utilities.

The Departments of Defense and Homeland Security have made satellite imagery available and the Federal Aviation Administration has been asked to authorize the use of surveillance drones to assess the severity of the damage.

Edwards told the president the damage to his state is "catastrophic." The power outage, he said, was affecting an estimated 2 million people.

"This is going to be a long haul," he said. "But I want to finish with really the most important thing: We are still in lifesaving mode here doing search and rescue."

Ida arrived over land on Sunday morning and carved a path northward, with a wind gust of 172 mph at its peak, the National Weather Service said. The Category 4 hurricane cut power to all of New Orleans, and the city issued a flash flood emergency.

The storm also caused flooding in neighboring Mississippi, where another 104,000 customers were without electricity, according to Poweroutage.us.

As it traveled over land, Ida was downgraded to a tropical storm early Monday with sustained winds of 60 mph.

Tropical storm warnings replaced hurricane warnings along flood-prone Louisiana from Grand Isle to the mouth of the Pearl River, including Lake Pontchartrain, Lake Maurepas and the New Orleans metropolitan area.

The NWS said Monday people should remain inside due to the threat of flash flooding. The storm caused trees and power poles to break, which snapped powerlines throughout southeastern Louisiana.

"Multiple flooded streets in New Orleans," the NWS tweeted. "Please stay sheltered in place unless you absolutely have to travel. Make sure to allow extra time."

The NWS added that wind damage will continue to be a threat near the core of the storm Monday.

Officials said there have been at least three death attributed to the storm, a 60-year-old man who was struck by a falling tree in Louisiana, a woman who died in her home in Jean Lafitte and a man who drowned after he attempted to drive his vehicle through floodwater.

LDH sadly confirms the death of a male who drowned after his vehicle attempted to go through floodwater near I-10 and West End Blvd. in New Orleans. His age is unknown at this time pending ID of the victim.— Louisiana Department of Health (@LADeptHealth) August 30, 2021

Sunday evening while reporting on location in New Orleans, AccuWeather's Bill Wadell reported that Hurricane Ida had "sent debris flying all over downtown New Orleans" with "trees toppled over [and] windows shattered."

All flights from several major airlines flying out of Jackson-Medgar Wiley Evers International Airport in Mississippi were canceled for Monday, the airport said in a tweet. All Southwest, American and United outbound flights were halted.

"It was relentless from 7 a.m. until maybe an hour ago, and every now and then we're still getting some gusts," McInnis told WWL-TV early Monday. "This was something that I've never seen before."

At WGNO-TV, producers and directors fled their control room in suburban Metairie, La., during a live broadcast of the hurricane Sunday when the storm damaged its roof.

"The ceiling has peeled away," reporter Susan Roesgen tweeted.

AccuWeather contributed to this report.

U.S. News // 23 hours ago
Canadian man missing after Cowboys game died in car crash, family says
Nov. 27 (UPI) -- A Canadian man who was listed as missing while visiting Texas for a Dallas Cowboys football game on Thanksgiving was killed in a car crash, his family said Saturday.