'March on for voting rights' on anniversary of March on Washington 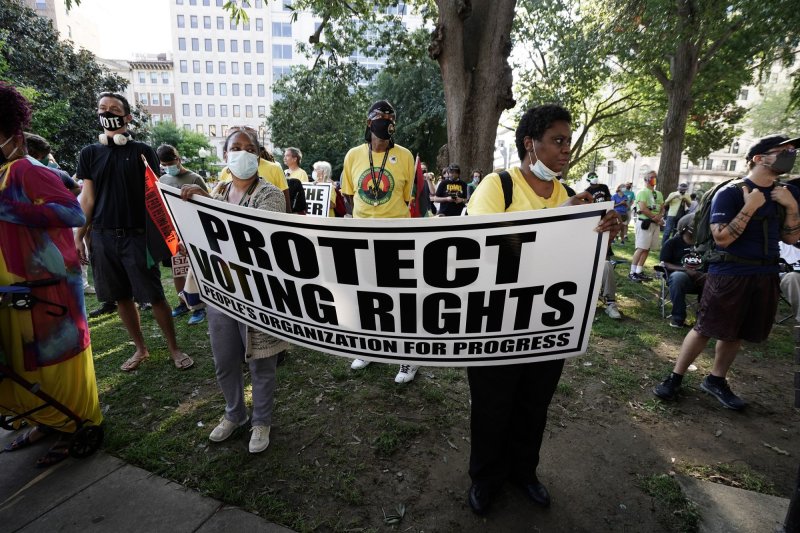 Demonstrators rally Saturday before marching to the National Mall on the 58th anniversary of the Rev. Martin Luther King Jr.'s "I Have a Dream" speech, in Washington, D.C. Photo by Ken Cedeno/UPI | License Photo

Aug. 28 (UPI) -- A "March on for Voting Rights" demonstration was held Saturday in cities across the country to mark the 58th anniversary of the historic "March on Washington" when Dr. Martin Luther King Jr. delivered his "I Have a Dream" speech.

Organizers of Saturday's march, including Martin Luther King III, his wife, Arndrea Waters King, and the Rev. Al Sharpton, said in a statement they are demanding that the "I Have a Dream" speech "be deferred no longer."

Specifically, the march is calling on the U.S. Senate to pass the John Lewis Voting Rights Advancement Act and the For the People Act and bypass the filibuster if necessary. Millions are expected to join the march in Washington, D.C., Phoenix, Atlanta, Houston and Miami, another statement shows.

A U.S. Supreme Court decision in 2013, dealt a blow to a key provision of the Voting Rights Act, which President Lyndon B. Johnson signed into law to prohibit racial discrimination in voting in August 1965. The provision required states with a history of discrimination to obtain federal permission before changing voting procedures.

The John Lewis Voting Rights Advancement Act and the For the People Act seek to restore the strength of the VRA of 1965. The "March on For Voting Rights" event also calls for the passage of the D.C. Admission Act for D.C. statehood, which would allow voting representation for residents in the capital.

McPherson Square filled up Saturday morning as people prepared to march to the National Mall in Washington, D.C., NBC Philadelphia reported. An estimated 75,000 people were expected to join the march in the capital.

A plan to mitigate COVID-19 spread is in place, including "everything from requiring masks to social distancing," National Park Service spokesman Mike Litterist told NBC Philadelphia.

Bowser led the crowd in a chant "Free D.C.!" in call for D.C. statehood.

"That kind of tells me that it's not a weeklong fight, or a month, or a year, it's a lifelong fight."

"Coretta Scott King told us, 'Freedom is never really won, you earn it and win it in every generation," Waters King, who is also president of the Drum Major Institute, which carries on Dr. King's non-violent work, said in a statement to CNN. "Now is the time to earn and win our sacred right to vote. It is up to us to remind Congress they represent the people, and the people demand the passage of the John Lewis Voting Rights Restoration Act."

The "March on for Voting Rights" will protest 389 bills introduced in 48 states "that amount to shameful, outright voter suppression," another statement on the march's website said.

"These laws suppress voting methods that enrich our democracy and lead to high turnout: banning ballot drop boxes and mail-in voting, reducing early voting days and hours, restricting who can get a mail-in ballot, prohibiting officials from promoting the use of mail-in ballots even when voters qualify, even criminalizing the distribution of water to voters waiting in the long lines these laws create," the statement said.

Leaders of the "March on for Voting Rights" said they are carrying the same resilient spirit as leaders in the civil rights movement who kept marching for voting rights after leaders in the movement, such as Medgar Evers and Jimmie Lee Jackson, were killed, CNN reported.

Prior to the historic "I Have a Dream" speech, white supremacist Byron De La Beckwith killed Evers, an NAACP field secretary and civil rights leader who organized voter registration drives in his driveway in June 1963.

In February 1965, months before the passage of the VRA, James Bonard Fowler fatally shot Jackson, a church deacon, as he tried to protect his mother during a voting rights march in Marion, Ala.

U.S. News // 36 minutes ago
Amber Heard says she has been 'harassed, humiliated' amid defamation trial
May 26 (UPI) -- Amber Heard on Thursday testified that she has been "harassed" and "humiliated" since her ex-husband Johnny Depp's lawyers called her allegations of abuse against the actor a "hoax."

U.S. News // 3 hours ago
Oxford, Mich., students hold walkout after Texas school shooting
May 26 (UPI) -- Students at Oxford High School in Michigan, the site of a mass shooting that left four dead in November, staged a walkout Thursday following a shooting at Robb Elementary in Uvalde, Texas, that killed 21.

U.S. News // 3 hours ago
Twitter shareholders lawsuit accuses Elon Musk of manipulating share prices
May 26 (UPI) -- A group of shareholders have sued Twitter and Elon Musk, saying the SpaceX and Tesla CEO has sought to influence stock prices amid an attempt to buy the San Francisco-based company.

U.S. News // 5 hours ago
Husband of slain Uvalde, Texas, teacher dies two days later
May 26 (UPI) -- The husband of one of the South Texas teachers killed in a school shooting this week died of a heart attack Thursday, family announced.

U.S. News // 5 hours ago
Court to determine if Nathan Carman competent for trial in mother's 2016 murder
May 26 (UPI) -- Nathan Carman, charged in an eight-count indictment for allegedly murdering his mother in 2016 so he could inherit millions of dollars, will face a hearing Friday to determine if he is competent to stand trial.

U.S. News // 7 hours ago
CDC confirms 9 monkeypox cases in 7 states
May 26 (UPI) -- The U.S. Centers for Disease Control and Prevention confirmed on Thursday nine cases of monkeypox across seven states.