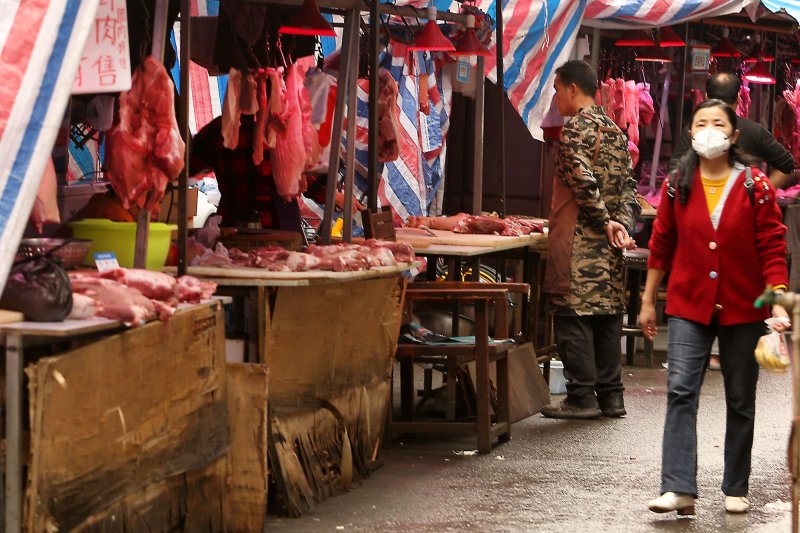 Fresh pork is sold at a neighborhood wet market in Wuhan, the capital of Hubei province, on November 1. A U.S. intelligence report said U.S. agencies are uncertain whether COVID-19 originated in a Wuhan wet market or an accident at a laboratory. File Photo by Stephen Shaver/UPI | License Photo

Aug. 27 (UPI) -- An intelligence report released Friday indicates the Biden administration is no closer to understanding the origins of the COVID-19.

The declassified report from the Office of the of the Director of National Intelligence said the U.S. intelligence community is divided between two main theories -- that the novel coronavirus either came from human exposure to animals or that it was the result of an accident in a Chinese laboratory.

"All agencies assess that [the] two hypotheses are plausible," the report said.

The only thing the intelligence community appears certain of is that China didn't develop the virus as a biological weapon and that the government didn't have advance knowledge of it before the initial outbreak.

President Joe Biden in May asked Director of National Intelligence Avril Haines to head up an investigation to discover the origins of the virus, which has, as of Friday, sickened sickened more than 38.53 million Americans and killed 632,786, according to the Centers for Disease Control and Prevention.

The Chinese government has blamed the spread of the virus on human contact with an infected animal in a so-called wet market in Wuhan.

The DNI report said the intelligence community won't be able to definitively settle on an explanation without additional information, such as clinical samples or epidemiological data from the earliest COVID-19 cases.

"China's cooperation most likely would be needed to reach a conclusive assessment of the origins of COVID-19," a summary of the report said. "Beijing, however, continues to hinder the global investigation, resist sharing information and blame other countries, including the United States.

"These actions reflect, in part, China's government's own uncertainty about where an investigation could lead as well as its frustration the international community is using the issue to exert political pressure on China."

U.S. News // 14 hours ago
Developing storm may bring breath of winter to Northeast
AccuWeather forecasters are intently tracking a developing storm that could potentially bring a wintry mix to parts of Northeast and steady rainfall along Eastern Seaboard as the second week of December gets underway.

U.S. News // 16 hours ago
CDC director: Omicron cases 'likely to rise' as variant detected in 16 states
Dec. 5 (UPI) -- CDC Director Dr. Rochelle Walensky warned Sunday that cases of the COVID-19 Omicron variant are "likely to rise" as they have been detected in at least 16 states.