Chairman of the Joint Chiefs of Staff Gen. Mark Milley on Wednesday said United States intelligence did not indicate the possibility of the collapse of Afghanistan's "army and this government in 11 days." File Pool photo by Evelyn Hockstein/UPI | License Photo

Aug. 18 (UPI) -- Chairman of the Joint Chiefs of Staff Gen. Mark Milley on Wednesday said U.S. military intelligence did not indicate that Afghanistan would fall to the Taliban as quickly as it did.

Speaking during a press briefing after the militant group captured the Afghan capital of Kabul, Milley denied reports that the Biden administration ignored warnings that the security situation would deteriorate quickly as the United States wound down its troops' presence.

"There was nothing that I or anybody else saw that indicated a collapse of this army and this government in 11 Days," Milley said.

President Joe Biden on Monday said he stands "squarely behind" his decision to withdraw troops from Afghanistan with a deadline of Aug. 31 but said "this did unfold more quickly than we anticipated."

Milley said the United States conducted a "deliberate and responsible drawdown" of troops with a focus on securing the U.S. Embassy and diplomatic presence in Afghanistan, adding that while the collapse was considered a possibility, U.S. intelligence did not indicate it would escalate as quickly as it did.

"I have previously said from this podium and in sworn testimony before Congress, that the intelligence clearly indicated multiple scenarios were possible. One of those was an outright Taliban takeover following a rapid collapse of the Afghan Security Forces and the government. Another was a civil war and a third was a negotiated settlement," he said. "However, the timeframe of a rapid collapse, that was widely estimated and ranged from weeks, months and even years following our departure."

Milley and Secretary of Defense Lloyd Austin also emphasized that the key mission currently was to evacuate Americans and at-risk Afghans from Kabul.

"This is a war that I fought in -- and I know the country. I know the people, and I know those who fought alongside me," Austin said. "As I said, we have a moral obligation to help those who helped us."

Milley added that 5,000 people have already been evacuated and that the situation at Hamid Karzai International Airport in Kabul --where Afghan citizens were seen clinging to the wings of U.S. military planes in desperate attempts to flee the city -- was now "under control."

The Air Force was averaging 20 sorties of C-17s evacuating people from the country every 24 hours and it has the capability to "significantly increase" that as the State Department makes evacuees available, he said.

Pentagon spokesman John Kirby told reporters in a separate briefing that the U.S. military had increased the number of troops stationed at the airport to 4,500.

"In the past 24 hours, 18 C-17 [Globemaster III] aircraft and one C-130 [Hercules] arrived with around 700 additional troops and some equipment," Kirby said.

Austin said that there had been "no hostile interactions" with the Taliban at the airport and that lines of communication with Taliban commanders remained open "as they should be."

However, the U.S. Embassy Kabul has informed Americans in Afghanistan that the United States "cannot ensure safe passage to the Hamid Karzai International Airport."

When asked if they had the abilities to retrieve Americans for evacuations, Austin said no.

"We don't have the capability to go out and collect up large numbers of people," he said. "It's obvious we're not close to where we want to be in terms of getting the numbers through."

To ensure Americans get out of the country, he said they will work 24/7.

"We're going to get everyone that we can possibly evacuate evacuated," he said. "And I'll do that as long as we possibly can until the clock runs out or we run out of capability."

In an interview with ABC News, Biden committed to evacuating every American even it it means exceeding his Aug. 31 deadline for complete military withdrawal though they will shoot to achieve their goal by the end of the month.

"If there's American citizens left, we're gonna stay to get them all out," he said.

He added that on top of the roughly 15,000 Americans in the Middle Eastern country there are also between 50,000 and 65,000 Afghans and their families he wants to evacuate, but to ensure they are out by the end of the month, the mission must be expedited. 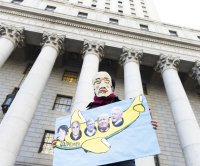 U.S. News // 2 hours ago
Accuser says Maxwell groomed her for Epstein
Nov. 30 (UPI) -- A woman who accuses Jeffrey Epstein of sexually abusing her when she was 14 years old told jurors Tuesday the late financier's closest associate Ghislaine Maxwell participated in grooming her for him.

U.S. News // 4 hours ago
4 jurors seated in trial of Kim Potter for death of Daunte Wright
Nov. 30 (UPI) -- Four jurors have been seated in the manslaughter trial of a former Minnesota police officer who fatally shot Daunte Wright during a traffic stop earlier this year.

U.S. News // 6 hours ago
Dr. Mehmet Oz announces bid for Pennsylvania Senate seat
Nov. 30 (UPI) -- Dr. Mehmet Oz, who rose to fame on "The Oprah Winfrey Show," announced a bid to run for the U.S. Senate in Pennsylvania as a Republican on Tuesday.