Aug. 17 (UPI) -- What was left of Tropical Storm Fred pushed northward on Tuesday dumping heavy rains and spinning up twisters in at least two states a day after it plowed into the Florida Panhandle with 65-mph winds. Sustained wind speeds had dropped off considerably since it made landfall and it was downgraded to a depression, but AccuWeather forecasters warned of numerous risks associated with the copious precipitation it was unleashing.

Raging waters from flash flooding hit Balsam Grove, N.C., on Tuesday afternoon, as Fred dumped a radar-estimate of 10 to 12 inches of rain over Pisgah National Forest, causing the North Fork French Broad River to swell. Extreme Meteorologist Reed Timmer reported that a vehicle had become trapped in the rushing water, and that personnel were not able to reach it.

Asheville, N.C., located just northeast of Balsam Grove, averages around 5 inches of rain in all of August

Dozens of tornado warnings were issued and at least ten tornado reports were received by the National Weather Service on Tuesday, including damage to buildings in Homer, Greshamville, Pinefield Crossroads, District Path, and Americus, Ga., as well as Stony Point, N.C. 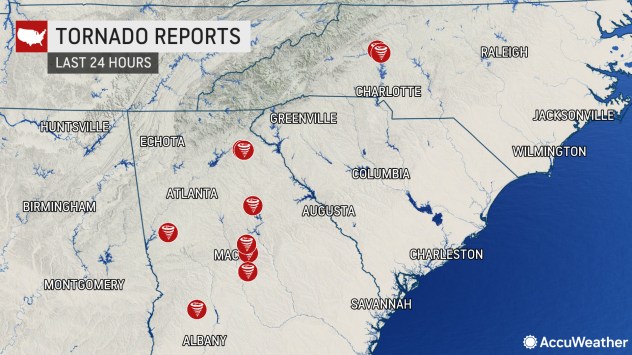 One of the twisters, in Jeffersonville, Ga., struck an Academy Sports warehouse around 6 a.m., damaging the building and tipping over a nearby semi-truck trailer. According to Twiggs County Sheriff Darren Mitchum, eight boats in the town were scattered by Fred, the Associated Press reported. 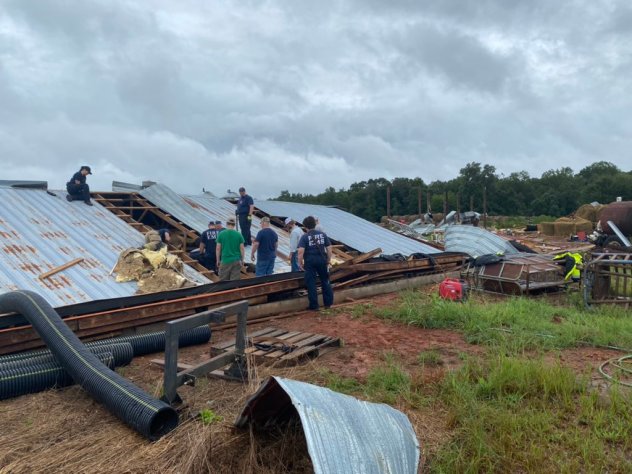 Tropical Storm Fred had been "the perfect storm," unfortunately, for drenching the Panhandle as it made landfall Monday afternoon, one Florida resident said.

With maximum sustained winds of 65 mph, 9 mph below the requirements to be considered a Category 1 hurricane on the Saffir-Simpson Hurricane Wind Scale, Fred made landfall near Cape San Blas, Fla., at 2:15 p.m. CDT, according to the National Hurricane Center. It pushed inland at a pace of only 9 mph.

But more than 90 minutes after the tropical storm had passed, one apartment complex in Lynn Haven, Fla., was still underwater.

RELATED Hurricane season has been slower in 2021, but experts warn it may awaken

AccuWeather national reporter Bill Wadell was at the Havenwood Garden Apartments, less than 10 miles north of Panama City, Fla., as water rescues were underway. Crews rescued multiple people from their flooded homes, including a young child, Wadell reported. As of Monday evening, there were no injuries reported at the apartment complex.

"This region just really got hammered by the back end of Fred," Wadell said.

The rain wasn't the only dangerous element Fred delivered to northwestern Florida. Amid erratic winds, power lines came down on one man's car in Panama City, trapping him inside until crews were able to pull them out. He was hospitalized with a broken neck.

The man had been parked in the driveway of his friend Tracy Skipper, who recounted the event to Wadell. 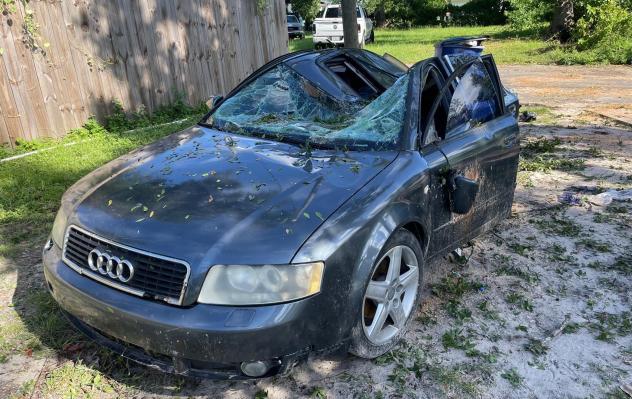 "He was napping ... I have several children in the house, so I imagine everybody's gotta get away from that every now and then," Skipper said.

But during the storm, powerful winds from Fred toppled the nearby tree, bringing down electric lines with it as it crushed the sedan.

"I just ended up going out there at one point and holding his hand and talking to him ... He was coherent and talking," Skipper said. "His neck is broken, so we were waiting to see if they're going to do surgery."

Warm, moist tropical air had resurrected Fred on Monday after the storm had become a depression over the weekend, all but falling apart in terms of how it looked in satellite imagery. But AccuWeather forecasters expected it would restrengthen, and it did just that after it emerged over the warm waters of the Gulf of Mexico.

Florida had at least been preparing for landfall since the previous week when Gov. Ron DeSantis declared a state of emergency for 23 of Florida's 67 counties. As the storm continued to strengthen upon its approach Monday, tropical storm warnings stretched from Apalachicola to Okaloosa-Walton counties, and school closures extended across the Panhandle. 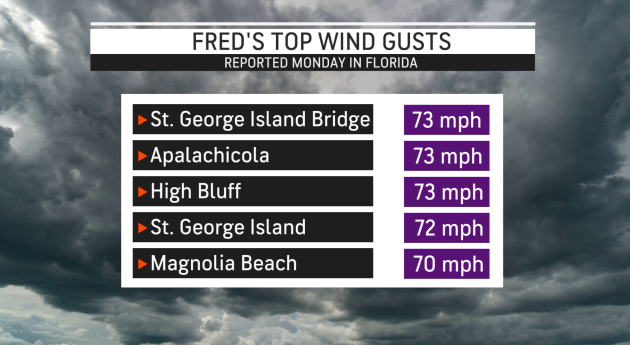 Storm surge, howling winds and power outages all preceded Tropical Storm Fred, and they continued to build upon landfall. Over 36,000 customers in Florida were without power at one point Monday evening, according to PowerOutage.US. Nearly half of the electric customers in Franklin County in Florida's Panhandle were without power by 6 p.m. Monday where winds gusted over 70 mph as Fred made landfall.

Around midday on Monday, Bay County officials had warned residents to expect Fred to be more similar to Sally than to Michael but advised them to stay prepared and stay off the roads nonetheless.

"It's going to be a nasty afternoon and evening, so just stay home and be safe. We encourage that for the public," District 5 Bay County Commissioner Philip Griffitts said during the press conference.

Storm surge at Apalachicola, Fla., a coastal city in Franklin County, had reached 4.43 feet above the normal tide level on Monday afternoon. The eyewall of the tropical storm had tracked just west of the city, sending waves crashing over US-98 and high-speed winds tearing through trees.

The scene was similar for other surrounding areas, as rising waters in Indian Pass, Fla., even forced some motorists to leave their cars in the road.

"People could run into a situation where they get stranded when they go through heavy water," Bay County Sheriff Tommy Ford said. "We ask them not to go through water that's standing because they don't know how deep it is. You could end up being in a situation where you're stranded and need to be rescued." 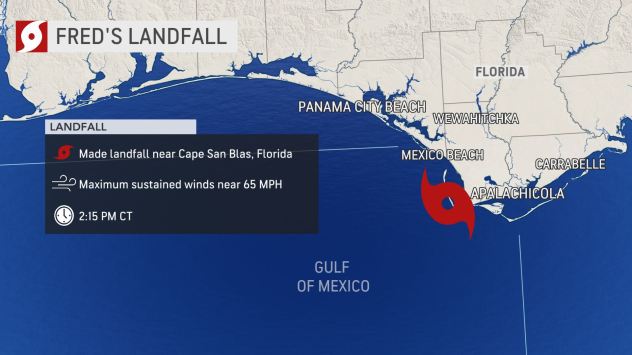 In Panama City, multiple streets were flooded as the storm rolled in, and traffic lights were also being reported out across the city, according to the Panama City Police Department.

Florida wasn't the only state to brace for impact, however. Caleb Traugh, a farmer from Early County in southern Georgia, told AccuWeather's National Reporter Jillian Angeline that direct impacts from tropical systems over four out of the last five years have claimed most of his crops and infrastructure on the farm. He had been hoping this year would be different.

"We certainly don't mind the rain in reasonable amounts, but the wind is what is catastrophic," Caleb Traugh told Angeline.

He added that "mother nature and farm economics" have been tough on farmers in southwestern Georgia over the last few years, though this season, with its timely rain, had brought a glimmer of hope.

"This above-average crop has the potential to get many farmers out of a financial hole they have been in for the last several years," Traugh said. " ...But the sigh of relief only comes after harvest, and we need favorable weather to get us there."

Fred was the first named storm to break the midsummer lull in the Atlantic hurricane, though that's not to say it didn't face any challenges. Many a time Fred lost intensity, dropping as far as a tropical rainstorm before restrengthening into a tropical storm ahead of landfall.

"The reasons why Fred changed intensity several times as it tracked across the Caribbean and the Gulf of Mexico were mainly due to the storm's interaction with land and wind shear," AccuWeather Meteorologist Joe Curtis said.

The storm even made the arduous trek through the mountainous terrain of Haiti and the Dominican Republic, which is known as the "hurricane graveyard."

As the storm entered the Gulf of Mexico, however, the warm waters replenished the system, allowing it to strengthen and come within 10 mph of hurricane strength.

Two other tropical systems have since populated the Atlantic since Fred's arrival.

Early Tuesday morning, Grace regained its tropical storm status in the eastern Caribbean, skirting the southern shore of the earthquake-ravaged Haiti. Farther east, Tropical Storm Henri continued to churn near Bermuda. Henri emerged on Monday within two hours of Fred making landfall. While the storm is forecast to track near Bermuda, forecasters say that it will likely circle the island rather than run through it.

U.S. News // 45 minutes ago
Grand Canal painting fetches $56.6M, a record for Monet Venice work
May 17 (UPI) -- A Claude Monet painting of the Grand Canal in Italy sold at auction Tuesday for $56.6 million, the highest one of his Venice paintings has fetched, Sotheby's in New York announced.