PG&E warns it may cut power to nearly 40,000 amid favorable fire conditions 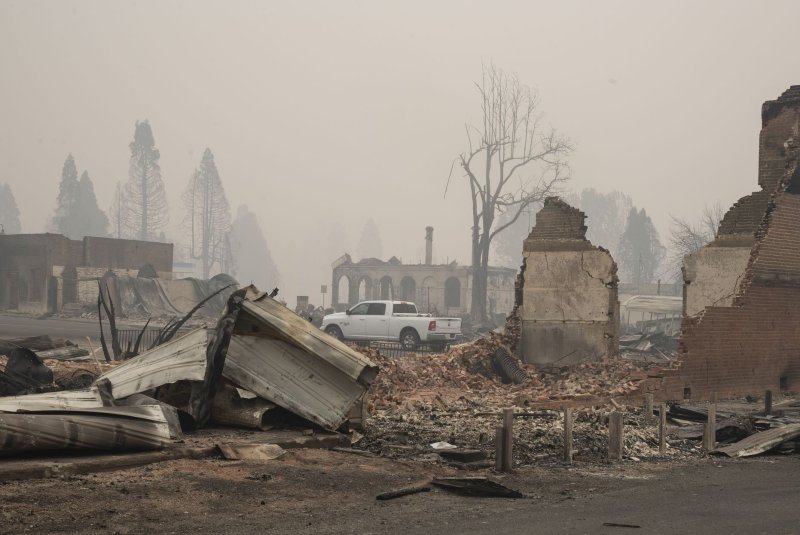 A truck drives past the remains of the Masonic Lodge in Greenville, California, on Thursday. The Dixie Fire has now burned over a half million acres and leveled the town of Greenville. Photo by Terry Schmitt/UPI | License Photo

Aug. 16 (UPI) -- Pacific Gas and Electric Company said it may shut down power to nearly 40,000 customers including areas near the raging Dixie Fire.

In a statement issued Sunday, the California utility cited the potential for dry offshore winds, drought and dry vegetation as factors in announcing plans to begin shutting off power to customers in 16 counties beginning Tuesday.

"PG&E has begun sending 48-hour advance notifications to customers in targeted areas where PG&E may need to proactively turn power off for safety to reduce the risk of wildfire from energized power lines," the company said.

Among the 16 counties affected by the potential shutdown are Plumas and Lassen -- two counties where the Dixie Fire is currently burning.

RELATED Death toll rises to 1,300 in Haiti after 7.2-magnitude earthquake

The California Department of Forestry and Fire Protection, or Cal Fire, on Monday said the Dixie Fire had burned 569,707 acres and was 31% contained.

The blaze has destroyed 1,173 structures and damaged 80 more. A total of 6,579 fire personnel along with 569 fire engines, 194 water tenders, 198 dozers and 20 helicopters have been deployed to combat the fire.

A Red Flag Warning will be put into effect in the fire area from 3 p.m. to 10 p.m. Tuesday as dry, hot, west-southwest winds with gusts up to 30 mph were predicted.

Officials said smoke over the fire has helped to moderate conditions, but increased winds could clear out the smoke and increase fire activity.

U.S. News // 18 hours ago
Tuskegee Airman Charles McGee dies at age 102
Jan. 17 (UPI) -- Brig. Gen. Charles McGee, a decorated Air Force pilot and one of the last surviving members of the Tuskegee Airmen, the all Black squadron of World War II, has died. He was 102.