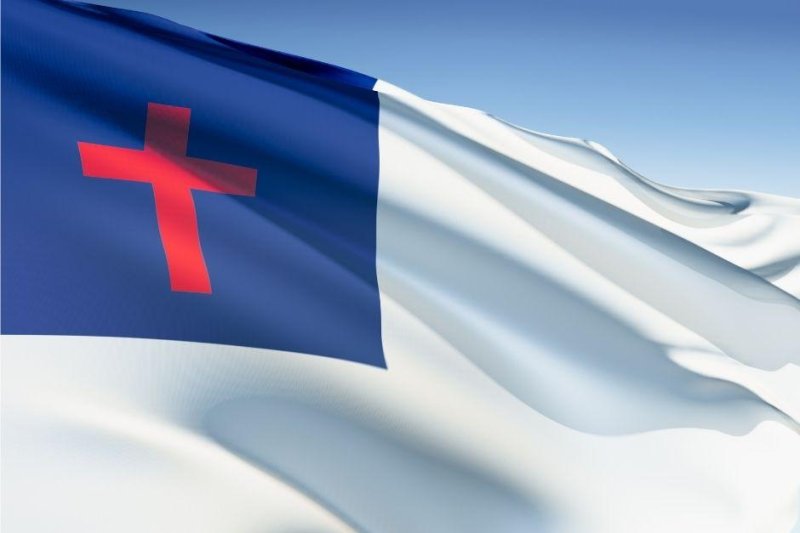 A lawsuit alleges that a civic association and its director's constitutional rights of free speech and equal protection under the law were violated by the denial of an application to raise the Christian flag during a celebration at Boston City Hall. Image courtesy of Liberty Counsel

Aug. 9 (UPI) -- A civic association and its director are asking the U.S. Supreme Court to overturn a ruling that rejected their request to fly a Christian flag on a Boston City Hall flagpole.

Harold Shurtleff and Camp Constitution allege in a lawsuit that their constitutional rights of free speech and equal protection under the law were violated by the denial of an application to raise the flag during a September 2017 celebration of Constitution Day and Citizenship Day. Their event was designed to commemorate the contributions of the Christian community to Boston and the Commonwealth of Massachusetts.

A Boston official has said the refusal was based on a policy to refrain from flying non-secular flags on its pole in accordance with the First Amendment's prohibition of government establishment of religion.

But Shurtleff, an association co-founder and a former Boston resident who now lives in New Hampshire, said Camp Constitution is not trying to force anybody to fly the flag.

"We're the ones that are actually going to fly it," Shurtleff told UPI. "The city isn't going to fly it, just us. We're going to raise it and have our ceremony and it will probably come down a day or two later or maybe just a few hours after that."

The flag is white and has a red Latin cross inside a blue square in the upper corner.

The city offered to fly a non-religious flag instead, but Shurtleff and the organization declined the offer. They filed suit in federal court seeking an order allowing them to hold ceremonies with non-secular flags at designated public forums -- which they contend includes the flagpole -- and a declaration that Boston's policy denying the flying of non-secular flags on the City Hall flagpoles based on their content is unconstitutional.

A trial court judge found in favor of Boston and the 1st U.S. Circuit Court of Appeals upheld that decision, ruling the city could act on legitimate concerns about excessive entanglement with religion and, thus, made a valid choice for its flag-raising program to remain secular.

Liberty Counsel, a Florida-based nonprofit that litigates religious liberty cases, then filed a petition at the Supreme Court asking the justices to overturn the 1st Circuit

"There is a crucial difference between government endorsement of religion and private speech, which government is bound to respect," attorney Mat Staver, Liberty Counsel's chairman, said in a news release. "Censoring religious viewpoints in a public forum where secular viewpoints are permitted is unconstitutional and this must stop."

RELATED Some younger evangelicals are leaving the faith

A decision by the justices on whether to hear the case is pending.

Camp Constitution, a public charitable trust, offers classes and workshops on U.S. history and current events. The organization, which was formed in 2009 and is based in New Hampshire, says its mission is to "enhance understanding of the country's Judeo-Christian heritage, the American heritage of courage and ingenuity, the genius of the United States Constitution and free enterprise."

Boston owns three flagpoles that are 83 feet tall and located in front of City Hall. The city usually raises the U.S. flag and the POW/MIA flag on one of them, the Massachusetts flag on another and its own flag on the third. On request, the city will sometimes replace its flag with another for a limited time.

From June 2005 through June 2017, the city approved 284 flag-raising events requested by private organizations at its third flagpole in connection with ethnic and other cultural celebrations, the arrival of dignitaries from other countries, the commemoration of historic events in other countries and the celebration of certain causes, according to court documents.

Shurtleff made a request in July 2017 to fly the Christian flag close to Sept. 17 as part of an event to "celebrate and recognize the contributions Boston's Christian community has made to our city's cultural diversity, intellectual capital and economic growth."

Liberty Counsel says if the application had not referred to the flag as Christian, Shurtleff's request would not have been rejected. It notes in the Supreme Court petition that Boston has raised flags with religious imagery.

Among them were the Portuguese flag, which has dots inside blue shields that represent the five wounds of Christ when crucified and 30 dots for the coins Judas received for having betrayed Christ, and the Turkish flag, with the star and crescent of the Islamic Ottoman Empire. In addition, Boston's flag includes the city seal, which contains a Latin inscription that translates as "God be with us as he was with our fathers," the petition says.

The city had no written policies for handling flag-raising requests when Camp Constitution asked to fly its flag and no previous application had been denied, according to the petition. Boston put its past policy and practice in writing in October 2018 and did not change how flag requests are handled, court documents say.

The Boston press office said city officials have no comment while the case is still pending.

In a brief opposing the request for the Supreme Court to hear the case, attorneys for Boston argue that people who see a flag flying above City Hall would reasonably interpret it as conveying a message on behalf of the city.

They also point out that the city did not deny Shurtleff and Camp Constitution's request to hold an event at the flagpole celebrating Christian values.

"Rather, the city denied them access to one of three city-owned flagpoles to raise a flag representing a particular religion in place of the city's flag," the brief says. "Thus, it can be inferred from the circumstances that the petitioners are not seeking permission to present their flag as part of an event celebrating the Christian religion or to engage in private speech, but are instead seeking to use the flagpole to obtain the powerful image of city approval of their religious views."

The groups say even modest governmental involvement with religion is a grave threat to religious freedom.

"There is no historical context that can give the Christian flag -- a purely religious symbol -- a nonreligious meaning," the brief says. "The physical context here -- displaying the flag in between the American and Massachusetts flags -- would only accentuate the impression that the city is favoring Christianity."

Shurtleff said a few people have told him they're worried that if he wins at the Supreme Court, the Satanic flag and others that they find objectionable will be allowed on the city poles.

"I said if you're worried about them flying the Satanic flag, which is not likely, you show up and you pass out your Bible tracts and you pray for them," he said.

U.S. News // 38 minutes ago
Michigan to allow absentee ballot processing 2 days before Election Day
Sept. 29 (UPI) -- Michigan lawmakers have reached a deal with the governor to allow more time to process what's expected to be a flood of absentee ballots during the upcoming November midterm and beyond.

U.S. News // 6 hours ago
Hurricane Ian: 1 dead, 2.4M without power in Florida
Sept. 29 (UPI) -- More than 2 million people throughout the state of Florida were without power early Thursday as the storm claimed its first death.

U.S. News // 8 hours ago
DHS approves Jones Act waiver to allow diesel to Puerto Rico amid power outages
Sept. 29 (UPI) -- The Biden administration has approved Puerto Rico's request to waive certain regulations that will allow a private tanker to unload its shipment of fuel on the Caribbean island.

U.S. News // 11 hours ago
Six injured in shooting at Oakland school campus
Sept. 28 (UPI) -- Six adults were injured in a shooting Wednesday near an East Oakland, Calif. school campus, according to police who said they are continuing to search for suspects.
Advertisement