July 30 (UPI) -- One day after a destructive tornado struck eastern Pennsylvania, causing the partial collapse of a car dealership and injuring several people inside, National Weather Service meteorologists confirmed that an EF3 tornado had torn through the area with peak winds of up to 140 mph.

The most intense damage, the NWS office in Mount Holly, N.J., said on Friday, was to a car dealership and an adjacent mobile home park.

Just after 7:10 p.m. Thursday, amid an outburst of severe weather in the mid-Atlantic, the twister struck near the Neshaminy Mall in Bensalem, Pa., according to the NWS Storm Prediction Center. The town in Bucks County sits about 20 miles northeast of Philadelphia.

Bensalem Public Safety Director Fred Harran said it was the worst damage he had ever seen, comparing the destruction to that of which a viewer might see "on a TV show."

"It just looked like a bomb went off. I mean, it's gone," he told ABC News. "I've been doing this for 34 years. I never saw that kind of devastation from a storm."

The Bensalem Fire Rescue reported numerous trees and wires had been downed throughout the township. Fire crews were working across a number of locations, including at reported building collapses on Metropolitan Drive and at Faulkner Buick GMC. The Faulkner Volvo building had also sustained damage. 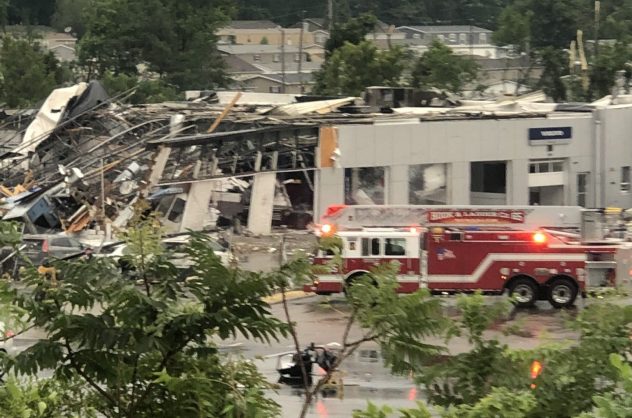 First responders arrived at a partially collapsed building in Bucks County, Pa., after a destructive tornado tore through the area on Thursday. Photo by @87Oladipo/Twitter

In the lot, showcased vehicles were turned on their roofs and wind-blown utility poles smashed cars. Pieces of the dealership roof could be seen strewn throughout the lot on video shared to social media.

"I just heard this loud bang in the middle of the parking lot and it blew right through the windows [of the dealership]," Victor Rivera, a customer inside the dealership at the time of the tornado, told 6abc. "My mom got under the table and I just held her in my arms. Then I watched the glass implode and the ceiling fall in and everything caved in from there."

Emergency responders that entered the Faulkner Buick GMC building found all persons to be accounted for, according to the Courier Times.

Anthoney Perez, an employee of the dealership, told the newspaper that a weather alert had sounded on his phone "seconds" before the building was hit. He and a group of employees and customers had just enough time to take cover in a car before the roof collapsed.

According to emergency officials, five people were injured in the car dealership, an incident that was declared a mass casualty event because of the multiple injuries.

Bill Rollin, the director for emergency alerts for Bucks, Montgomery and Delaware counties, told CBS3 that a mass casualty incident for the area is defined as "any incident where three or more people are injured."

A mass casualty incident is any event that overwhelms local systems and exceeds resources.

The storms caused damage in other areas of the town as well, including a gardening center. No other injuries have been reported.

A second tornado in Bucks County was later confirmed by the NWS, though not as powerful as the EF3 that brought down the car dealership building. An EF1 tornado tracked through Plumstead Township, Pa., on Thursday as well, with peak winds of 90 mph. 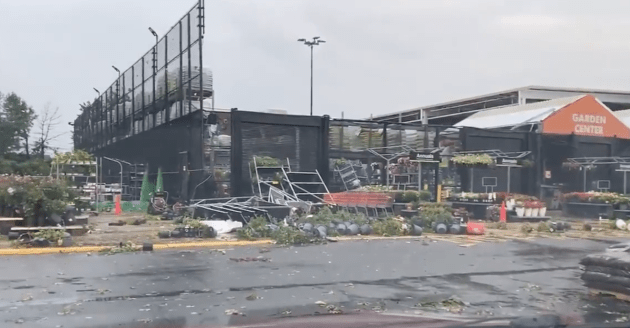 Severe damage was left behind in a garden center located in Bensalem, Pa., after a tornado touched down in the area on Thursday. Photo by @PFDSullivan/Twitter

"In addition to the reports of tornadoes, there were also numerous reports of wind damage, hail as large as 1.5 inches in diameter and flash flooding from torrential rainfall across eastern Pennsylvania and central New Jersey with the thunderstorms Thursday," AccuWeather meteorologist Derek Witt said.

Bensalem resident Lindsay Morris told AccuWeather that the intense rain was both sudden in its arrival and departure.

According to reports from the NWS Philadelphia office, a strong thunderstorm passed over the Northeast Philadelphia Airport, just 5 miles from Bensalem, shortly before 7 p.m., dumping over 0.25 of an inch of rain in less than an hour.

"It basically poured buckets and the wind was crazy and then it stopped like someone flipped a switch and the sun came out," Morris said.

Another resident of Bensalem, Amanda Amos, told AccuWeather that she was driving into Bensalem when stormy weather was striking. Tornado alerts were popping up on her car and phone as she drove into the area, and the intensity of rain and wind forced her to pull over due to "zero visibility."

"I thought I was going to be taken away," she said. "All I kept thinking about was strapping myself to a pole with a belt like the movie Twister."

But like Morris, Amos said it went from hectic to calm and sunny in an instant.

The storms that rolled through the region are associated with the same weather system that brought damaging winds, hail and isolated tornadoes to parts of the Midwest at midweek. There was a total of six preliminary tornado reports on Thursday across Ohio and Pennsylvania, with a seventh in Illinois.

Damage from an EF0 was confirmed in Verona, located in Essex County, N.J., with winds of up to 65 mph, and along with an EF1 and an EF2 tornado in Ocean County, N.J. The EF2 tornado, which had tracked through Waretown to Barnegate Light, was upgraded from an EF1 rating to its current status after it was found to have peak winds of up to 115 mph.

An EF2 tornado was confirmed to have tracked from near New Hope, Pa., and crossed the Delaware River into Mercer County, N.J.

Looking ahead, weather in the region is expected to mostly cooperate with cleanup efforts.

"Temperatures across the region will run 5-10 degrees below average from Friday through early next week, and humidity levels will be down quite a bit during that time," Witt said. "Also, conditions will be dry on Friday and Saturday, but there can be a thunderstorm around on Sunday afternoon and evening."

U.S. News // 1 hour ago
Arizona Senate, Maricopa County end standoff over 2020 election review
Sept. 18 (UPI) -- The Arizona Senate has struck a deal with the board of the state's most populous county after months of jousting over a controversial review of the 2020 election results.

U.S. News // 6 hours ago
California synagogue shooter pleads guilty to federal charges
Sept. 18 (UPI) -- A California man has pleaded guilty in federal court for his deadly attack on a synagogue and attempt to set a mosque on fire.

U.S. News // 10 hours ago
'Justice for J6' rally organizer supports peaceful Jan. 6 participants
Sept. 18 (UPI) -- Matt Braynard, an organizer for the "Justice for J6" rally near the U.S. Capitol drew a distinction Saturday between the Jan. 6 riot participants involved violence and those who peacefully participated.