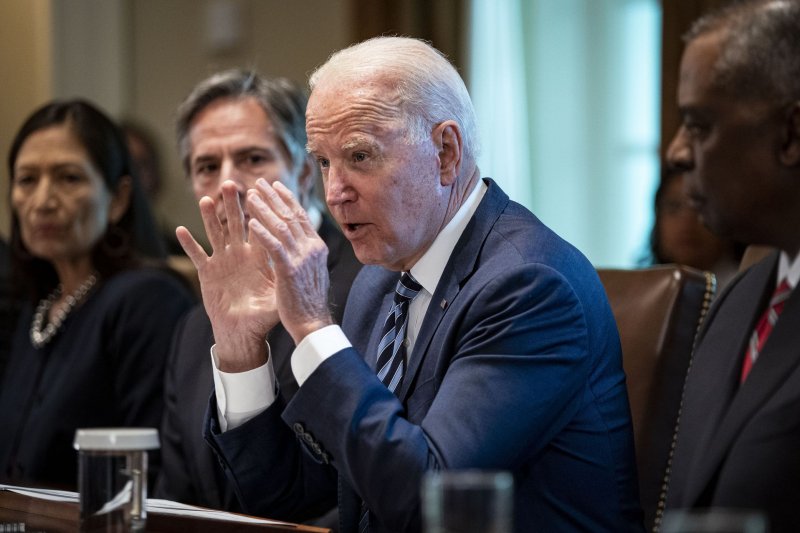 President Joe Biden speaks during a Cabinet meeting at the White House in Washington, D.C., on Tuesday.  Photo by Al Drago/UPI | License Photo

July 21 (UPI) -- President Joe Biden said on Wednesday during a town hall in Ohio that the current rise of COVID-19 cases indicates "a pandemic for those who haven't gotten the vaccination."

Speaking at Mount St. Joseph University in suburban Cincinnati, Biden said those who are vaccinated are largely safe from serious illness, but those who have not remain at risk.

"We have a pandemic for those who haven't gotten the vaccination. It's that basic, that simple," he said.

Biden added that he believes vaccines will "soon" be approved for children under 12 and that children in that age group will likely have to wear masks in school until they are available.

"When they are ready, when they've done all the [science] that needs to be done -- children 5, 6, 7, 8, they all have different makeups. They're developing. They're trying to figure out whether or not there's a vaccination that affects one child that it is at such an age, and not another child. That's underway," he said.

Biden also said he believes a compromise on an infrastructure bill will be achieved, calling a procedural vote that failed to reach the 60-vote threshold necessary to advance in the Senate "irrelevant" to the potential for it to ultimately be passed.

"I think it's going to get done," Biden said. "Remember last four years when we had infrastructure week every week -- we didn't do a thing, but it's necessary, you know, I really mean, it's going to not only increase job opportunities but increase commerce, so it's a good thing and I think we're going to get it done."

Asked to respond to House Republican leader Kevin McCarthy's decision to withdraw his selections for the select committee investigating the Jan. 6 riot at the Capitol after House Speaker Nancy Pelosi rejected two of his picks, Biden said he has "faith in the American people" that there can be a consensus on the events of that day.

"I don't care if you think I'm Satan reincarnate," he said. "The fact is you can't look at that television and say, nothing happened on the 6th."

"You can't listen to people who say, this is a peaceful march."

Some in southern Ohio protested the president's arrival Wednesday. The anti-abortion group Right to Life of Greater Cincinnati has pushed for supporters to picket the town hall event and called the Catholic college to complain about Biden's visit.

"The university is hosting a president who claims to be a Catholic, yet has the most pro-abortion administration in the history of our country," Right to Life said in a statement. "President Biden carries responsibility for the deaths of hundreds of thousands of unborn lives."

The university, which is run by the Sisters of Charity and not the Archdiocese of Cincinnati, held firm on hosting Biden.

"The university has always been and will continue to be a diverse and inclusive place where people from different races, ethnicities, social backgrounds, beliefs and religions can come together to discuss and share their unique perspectives," the university said, according to the Cincinnati Enquirer. "We look forward to introducing the Mount to a nationally televised prime-time audience."

The archdiocese said Archbishop Dennis Schnurr would not have granted approval "for any such event to occur on Catholic premises," but noted that Mount St. Joseph University operates independently.

U.S. News // 17 hours ago
Man killed by multiple bee stings from 100-pound beehive, others injured
July 31 (UPI) -- One person was killed and several others were injured when bees from a 100-pound beehive stung people in an Arizona neighborhood.