July 19 (UPI) -- The Bootleg Fire in Oregon grew to 343,755 acres Monday amid a ninth consecutive day of fire activity that forced firefighters to seek safety.

The blaze, currently the largest active fire in the United States, was just 25% contained as a Red Flag Warning indicating high winds and low humidity contributed to conditions that forced firefighters to move to safety zones and look for opportunities to re-engage, according to an update from fire officials.

"We are running firefighting operations through the day and all through the night," said Incident Commander Joe Hessel. "This fire is a real challenge, and we are looking at sustained battle for the foreseeable future."

Operations Section Chief John Flannigan echoed the concern regarding the hot temperatures in a Sunday morning briefing, according to CNN.

A firefighter was briefly separated from his unit at 6:30 p.m. while working to contain spot fires. Helicopters and specially trained crews were deployed to search the area and the firefighter was found at about 8:30 p.m., The Oregonian reported.

The Bootleg Fire has been burning for about two weeks and fire spokeswoman Kathy O'Hara told The Washington Post a "season-ending weather event" such as significant rain or snow may be needed to fully contain the blaze.

"It is so dry out here on the ground that to be able to extinguish the fire completely, to be able to have what we call full containment of the fire, we are going to need Mother Nature's help," she said.

Residents in the Monument Rock area of Oregon's Lake County were placed on Level 2 evacuation warnings.

"You should be ready to leave at a moment's notice as this level indicates there is a significant danger to your area and residents should either voluntarily relocate to a shelter or with family/friends outside of the affected area," the warning stated. 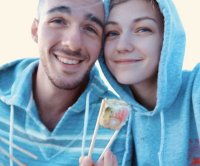 U.S. News // 6 hours ago
All NYC municipal workers must get COVID-19 vaccine by month's end, mayor says
Oct. 20 (UPI) -- New York City Mayor Bill de Blasio announced on Wednesday that all city workers must be vaccinated against COVID-19 -- and they must have at least the first dose by the end of the month, or be removed from their jobs.

U.S. News // 8 hours ago
Woman captures 'Brocken spectre' on video at ridge in Washington state
Nikki Klein was having a less-than-pleasant day when she ventured out to Hurricane Ridge in Olympic National Park, leading her directly into a "magical" encounter the likes of which she had never experienced before.
Advertisement