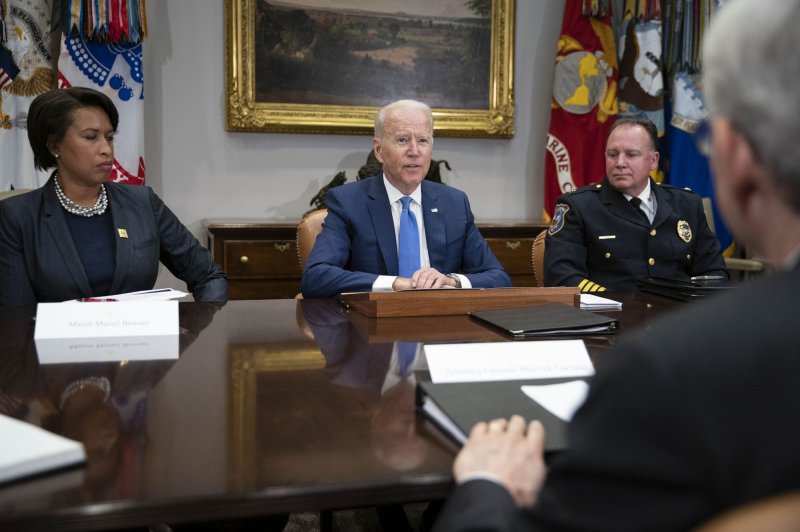 July 12 (UPI) -- President Joe Biden on Monday said cracking down on the flow of illegal firearms is a key to ending a surge in gun violence across the United States this summer.

Before meeting with a group of city officials and local police chiefs in a White House roundtable on gun violence, the president told reporters that, while there is no "one-size-fits-all" approach to reducing gun crime in cities, some methods are known to work.

"The first of those that work is stemming the flow of firearms used to commit violent crimes," Biden said. "It includes cracking down and holding rogue gun dealers accountable for violating federal law."

The new effort will involve the creation of five new strike forces aimed at illegal gun flows "from New York to the Bay Area," he said.

While urging a crackdown on illegal arms, the president did not address or endorse Democratic Party-backed gun control legislation, which has long been blocked by Senate Republicans.

The meeting comes amid increasing gun violence across the country at the same time a move to reform policing is continuing.

In late June, Biden announced a "major crackdown" focused on enforcing federal gun laws aimed at gun trafficking. The Bureau of Alcohol, Tobacco, Firearms and Explosives has set up strike forces zones to combat the problem.

In 2020 homicides were up 30% across the country while gun violence has increased by 8%, government figures show.

Adams campaigned on addressing violence while maintaining civil rights and trust in the police. Shootings are up significantly in New York over the past two years, as they are in many parts of the country.

A shooting and subsequent manhunt in family friendly Times Square in June brought the problem into stark view for many.

Adams praised Biden's stance on limiting access to illegal handguns often used in street violence in the city's metro areas rather than focusing on assault-style rifles.

"This president is making it clear," he told ABC News following the meeting. "He's going to redefine the ecosystem of public safety, and that includes identifying the role of police, schools, families, resources, employment."

Adams will face Republican Curtis Sliwa, the founder of the Guardian Angels vigilante group, in the general election in November.

U.S. News // 2 hours ago
Utah bills would ease student dress codes for religious, cultural items
Feb. 6 (UPI) -- As high school students around the country fight for the right to wear religious and cultural items at graduation and athletic events, Utah is considering legislation to allow it.

U.S. News // 2 hours ago
Poll: American support for Ukraine remains high after year of conflict
Feb. 6 (UPI) -- A majority of Americans remains supportive of Ukraine as Russia's war in that country enters its second year, according to a poll released Monday.

U.S. News // 5 hours ago
U.S. farm belt expanding its role in renewable natural gas
Feb. 6 (UPI) -- Among the largest RNG facilities in the portfolio of Northern Biogas is an Idaho operation drawing on the waste of thousands of dairy cattle.

U.S. News // 6 hours ago
Dell plans to cut more than 6,600 Jobs due to plummeting PC sales
Feb. 6 (UPI) -- Dell plans to lay off 6,650 workers as the company responds to waning demand for its personal computers -- the latest tech giant forced to downsize as millions of inflation-weary consumers change their spending habits.

U.S. News // 6 hours ago
Buffalo hit with 3.8M earthquake; no damage reported
Feb. 6 (UPI) -- A 3.8-magnitude earthquake near Buffalo, N.Y., Monday morning rattled the nerves of residents around the region but not much else with no immediate damage or injuries reported, officials said.