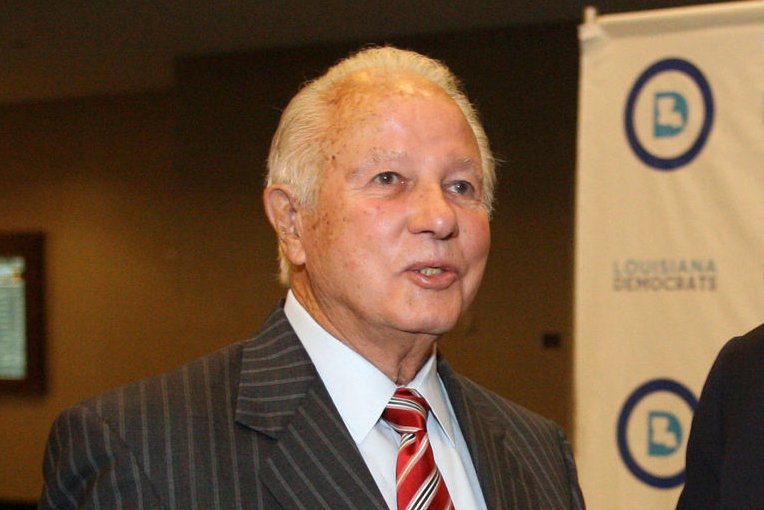 Edwin Edwards speaks to the media on the first day of his federal corruption trail in Baton Rouge, La., on January 25, 2000. Photo by James Terry/UPI | License Photo

Edwards was one of the more colorful characters in politics in the 20th century who may be best known for his 1991 gubernatorial campaign slogan "Vote For the Crook. It's Important." It was a race in which he beat Ku Klux Klan grand wizard David Duke.

Following that stint in office -- his last of four terms as governor -- Edwards served eight years in jail on racketeering charges.

"I have lived a good life, had better breaks than most, had some bad breaks, too, but that's all part of it," Edwards said at his home in Gonzales, La., according to KATC.

"I tried to help as many people as I could and I hope I did that, and I hope, if I did, that they will help others, too. I love Louisiana and I always will."

"I've made no bones that I have considered myself on borrowed time for 20 years, and we each know that all this fun has to end at some point," he said following the move.

Edwards was born in Marksville, La., on Aug., 27, 1927, to a half-Cajun sharecropper mother and a French-speaking Cajun midwife.

He later started his career as an attorney representing French-speaking clients after having graduated from with a law degree from Louisiana State University.

In 1985, during his third term as governor he was tried in relation to a $2 million bribery scheme. He was acquitted on all charges.

Edwards was known for blatant acts of self interest in his time as an elected official. "It was illegal for them to give, but not for me to receive," he once said when confronted about illegal campaign contributions.

He was convicted on 18 counts related to allegedly taking bribes in exchange for riverboat gaming licenses when Louisiana opened up to gambling. Edwards never admitted guilt. After eight years in jail, he was released in 2011.

Immediately upon release, he married prison pen pal Trina Grimes Scott, now 42, and became a father again in 2013. He had four children from two previous wives. The two had a short lived reality show named The Governor's Wife on A&E.

Edwards again ran for office in Louisiana's Sixth Congressional District in 2014, but came in second.