President Joe Biden speaks about his infrastructure plan last Friday in the Eisenhower Executive Office Building in Washington, D.C. He's expected to detail certain parts of the plan during a trip to Illinois on Wednesday. Photo by Samuel Corum/UPI | License Photo

July 7 (UPI) -- President Joe Biden pitched a bipartisan infrastructure package during a trip to the Chicago area Wednesday, seeking to strengthen his vision to invest in childcare, healthcare, education and other aspects of American life.

The visit to McHenry County Community College in Crystal Lake, Ill., was part of the Biden administration's effort to bring attention to improving education. One of the key items in the legislation would make college tuition more affordable.

"Under a bipartisan infrastructure agreement, we're going to make the biggest investment in roads and bridges and the construction of the interstate highway system, literally creating millions of good paying jobs," Biden said. "And God willing, we're not going to have 40 weeks of 'this is infrastructure.'"

During the trip, Biden toured the college, which has a workforce development program and child care center. Gov. JB Pritzker, Sens. Dick Durbin and Tammy Duckworth, and Rep. Lauren Underwood joined him.

He also met with Chicago Mayor Lori Lightfoot and Cook County Board President Toni Preckwinkle about violence in Chicago.

"The fact that he wanted to come here to Crystal Lake says a lot about who I think Joe Biden is," resident Michael Zellmann told ABC News. "He's open and I believe the people are willing to listen."

Other initiatives designed to boost the economy and middle class -- like two years of free community college, universal prekindergarten, paid family leave and medical leave -- will be detailed during his visit Wednesday.

The president narrowly carried Illinois during the 2020 presidential election while Democratic Rep. Lauren Underwood won re-election by a slimmer margin. The seat is considered crucial for Democrats to hold in the 2022 midterms to control the House.

"When you look at McHenry County we have historically been Republican, and Crystal Lake is an amazing community and we are incredibly open to hearing what any politician has to say, especially our president," Zellmann added. 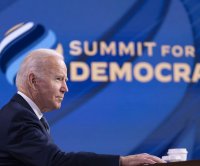 U.S. News // 2 hours ago
Biden opens democracy summit with 'landmark' initiative to defend human rights
Dec. 9 (UPI) -- President Joe Biden opened the long-awaited, U.S. organized Summit for Democracy at the White House on Thursday -- a virtual event that will include more than 100 countries to fight corruption and defend human rights.

U.S. News // 3 hours ago
Former Sen. Bob Dole to be honored, lie in state at U.S. Capitol Thursday
Dec. 9 (UPI) -- Bob Dole, former U.S. senator from Kansas and Republican presidential nominee who died early this week, will be memorialized and lie in state in the U.S. Capitol Rotunda on Thursday.

U.S. News // 1 day ago
Biden visits Kansas City to underscore benefits of $1.2T infrastructure plan
Dec. 8 (UPI) -- President Joe Biden traveled to Kansas City on Wednesday in a trip to promote the new $1.2 trillion bipartisan infrastructure bill and explain how it's going to create thousands of jobs in places like the Midwest.

U.S. News // 19 hours ago
Abortion rights council calls on California to pay for out-of-state patients if Roe vs. Wade falls
Dec. 8 (UPI) -- A council made up of abortion rights and women's health advocates recommended Wednesday that California prepare to provide abortion access -- and funding -- to all Americans if the Supreme Court overturns Roe vs. Wade.