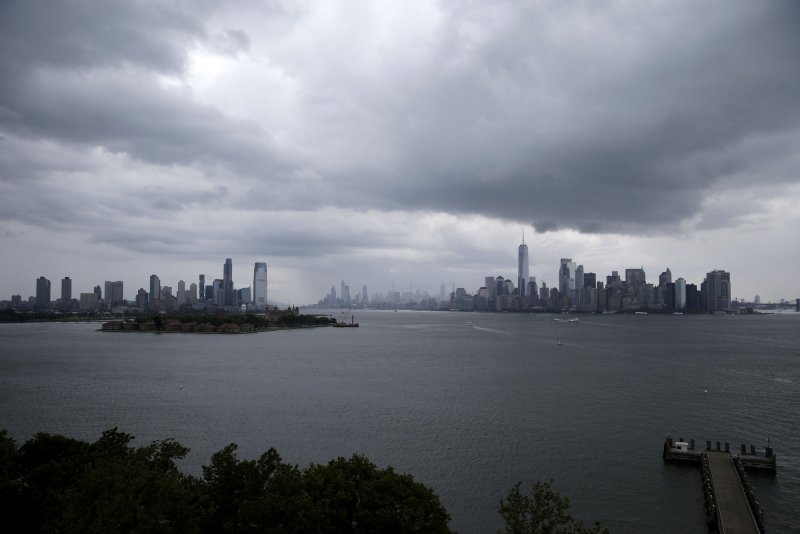 Storm clouds pass over the Statue of Liberty and the Manhattan skyline on Thursday. Photo by John Angelillo/UPI | License Photo

Those wishing for a break from extreme heat in the Northeast are in luck. A cooldown is on the way for the region as the holiday weekend begins, but not before severe thunderstorms bring dangerous conditions.

Heat raged in the Northeast this week as the second heat wave of the season took hold. Several major metropolitan areas had temperatures rising to 90 degrees Fahrenheit and higher starting Sunday. Humidity caused AccuWeather RealFeel® Temperatures to soar even higher.

Multiple locations broke daily temperature records across the Northeast as highs floated 10 to 20 degrees above average.

Places such as New York and Syracuse, N.Y.; Richmond, Va.; Philadelphia; and Hartford, Conn., each had a four-day streak of temperatures in the 90s.

Boston and Newark, N.J., broke or tied high temperature records for three days in a row on Monday, Tuesday and Wednesday.

Boston's 100 F on Wednesday not only smashed the daily record, it also tied the monthly record for June. The city usually sits at highs around 80 F at the end of June. It was also the third earliest 100 on record. Newark reported a high of 102 on Tuesday and 103 on Wednesday.

The heat is in the process of meeting its end though, and it is going out with a bang in some locations.

"After several of days of hot weather with records breaking, a cold front will continue to progress slowly southeastward through the weekend for cooler weather," said AccuWeather senior meteorologist Matt Rinde.

This frontal boundary can spark strong to severe thunderstorms across the coastal areas of the mid-Atlantic region and part of southern New England into Thursday night as it arrives. Cities at risk include Richmond, Washington, D.C., Philadelphia, New York City, and Wilmington, Del.

This severe threat will overlap an area that was impacted by severe storms on Wednesday. Hefty thunderstorms that rolled through parts of the Northeast from Maryland to Maine resulted in a plethora of high wind reports and numerous power outages.

The biggest threats for Thursday evening's severe weather will be flash flooding and damaging winds with an AccuWeather Local StormMax&trade of 70 mph. Isolated tornadoes are not out of the question with these storms either.

Forecasters advise residents to watch for ponding on roadways and pockets of flash flooding, and motorists are reminded to never drive on a flooded roadway.

Intense winds can cause tree damage and lift unsecured objects into the air. This can cause more power outages across the area of concern.

Despite these dangerous conditions, the thunderstorms and downpours will tame the heat that has been haunting the Northeast. Compared to highs on Tuesday and Wednesday, highs on Friday are forecast to be 15 to 35 degrees lower across the region, thanks to extensive clouds and areas of rain.

Temperatures will drop to below average as the week comes to a close.

After hitting 100 in Boston on Wednesday, the mercury is anticipated to be no higher than the upper 60s F on Friday, then only reach the middle 60s on Saturday. Hartford is forecast to have temperatures ratchet down in a similar way, with temperatures in the 60s on Friday and Saturday, over 15 degrees below average there for early May.

"The nature of the system driving the cold front is such that it will keep this cooler pattern in place for several days," Rinde said.

During part of the holiday weekend, "this same system will also allow for a risk of showers and thunderstorms over the area from New England into the mid-Atlantic," Rinde said.

Forecasters expect these storms to be spottier in nature than Thursday's severe weather.

"This could certainly disrupt some holiday weekend plans with rainfall, but hopefully Sunday will see enough improvement to get through most of the events for the day," Rinde said.

Temperatures will also attempt to recover across the Northeast, but they can still remain below the average temperatures for July Fourth, which are generally in 70s and 80s.

As long as the spotty thunderstorms stay away, this could make for a pleasant Independence Day.

However, the chance for more sweltering heat is not far off.

Temperatures will trend upward next week, with another possible round of 90-degree weather in the mid-Atlantic and Northeast toward the end of the week, AccuWeather senior meteorologist Tyler Roys said.

U.S. News // 6 hours ago
Federal Reserve keeps interest rates unchanged at near-zero
Sept. 22 (UPI) -- The Federal Reserve on Wednesday held steady on its benchmark lending rate, leaving it near zero and warning that an increase could be coming as the economy rebounds from the COVID-19 pandemic.
Advertisement