June 27 (UPI) -- The U.S. military carried out airstrikes late Sunday against several facilities belonging to two Iran-backed militias in Iraq and Syria at the direction of President Joe Biden, the Pentagon said.

Pentagon spokesman John Kirby announced the strikes and described them as "defensive precision airstrikes" targeting facilities operated by Kata'ib Hezbollah and Kata'ib Sayyid al-Shuhada, which have been targeting U.S. personnel and facilities in Iraq with unmanned aerial vehicles.

Two operational and weapons storage facilities in Syria and one in Iraq were hit, he said.

"As demonstrated by this evening's strikes, President Biden has been clear that he will act to protect U.S. personnel," Kirby said in a statement. "Given the ongoing series of attacks by Iran-backed groups targeting U.S. interests in Iraq, the president directed further military action to disrupt and deter such attacks."

Kirby said the attacks were necessary, appropriate and deliberately designed to prevent an escalation in the conflict while sending "a clear and unambiguous deterrent message."

Sunday marked the second time the military under Biden has struck Iran-backed military groups in Syria. He authorized airstrikes in February targeting facilities at a border control point operated by the same two groups.

"Protecting the military heroes who defend our freedoms is a sacred priority," she said in a statement. "The Iran-backed militias utilizing these facilities have been engaged in attacks threatening U.S. service members, as well as our allies."

Congress, she said, "looks forward" to receiving formal notification of the attack under the War Powers Act.

The Pentagon said the attack was carried out under the United States' right to self-defense as a guest in Iraq at the invitation of the Baghdad government for the purpose of assisting its security forces with efforts to defeat the Islamic State terror group.

U.S. News // 44 minutes ago
Another 5 jurors seated in Kim Potter trial for death of Daunte Wright
Dec. 1 (UPI) -- Another five jurors were seated Wednesday in the manslaughter trial of a former Minnesota police officer who fatally shot Daunte Wright during a traffic stop earlier this year.

U.S. News // 49 minutes ago
Stacey Abrams announces bid for Georgia governor in 2022
Dec. 1 (UPI) -- Stacey Abrams announced Wednesday that she will run for governor of Georgia in 2022 following successful organizing efforts for Democrats in the state after her 2018 loss to Gov. Brian Kemp. 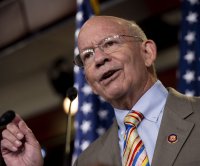 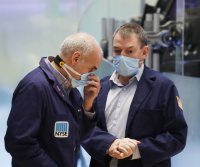