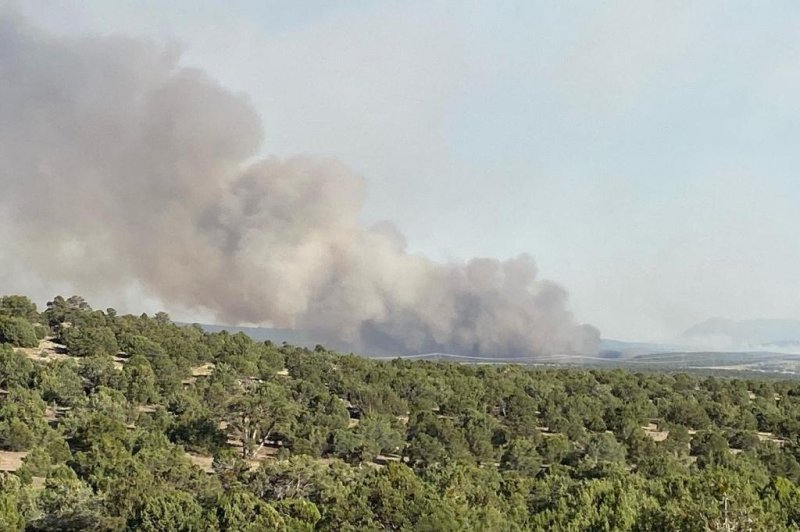 The BackBone Fire burns on Monday near Tucson, Ariz. The blaze is one of almost two dozen wildfires burning in the state of Arizona. Photo courtesy Tucson Fire Dept./Twitter

June 22 (UPI) -- Hot temperatures and drought conditions have made for a difficult start to the wildfire season in the West, as several fires are burning across multiple states, most notably Arizona, California, Colorado and Oregon.

The soaring temperatures have significantly added to the fire danger.

In Arizona, Coconino County officials told several communities surrounding Flagstaff to be ready to evacuate due to the 20,000-acre Rafael Fire. They said residents living south of Interstate 40 and west of Interstate 17 should be ready to leave at a moment's notice.

The Rafael Fire, believed to have been started by lightning, is one of nearly two dozen wildfires burning across Arizona.

In Colorado, the Oil Springs Fire has burned more than 5,000 acres so far largely on federal land in Rio Blanco County.

Authorities say that blaze was started by lightning and firefighters have been focused on protecting structures.

The Oil Springs Fire was aided by tropical storm-strength gusts of up to 40 mph on Monday.

Firefighters worked to contain the Cutoff Fire in northern Klamath County, which has so far blackened almost 1,200 acres and is threatening more than 100 structures.

U.S. News // 57 minutes ago
Rep. Fortenberry expects federal indictment accusing him of lying to investigators
Oct. 19 (UPI) -- Congressman Jeff Fortenberry said he expects to be indicted on allegations he lied to federal investigators after a campaign scandal five years ago.

U.S. News // 2 hours ago
Facebook rolls out 'Novi' crypto wallet to test in U.S., Guatemala
Oct. 19 (UPI) -- Facebook launched its digital wallet for cryptocurrencies, called Novi, in most of the United States and one Central American nation on Tuesday.