The system could strengthen to become Tropical Storm Claudette. Image courtesy of NOAA

June 17 (UPI) -- A tropical storm warning was issued late Thursday afternoon for much of the U.S. Gulf Coast as AccuWeather meteorologists continue to closely scrutinize what the National Hurricane Center has dubbed Potential Tropical Cyclone Three.

The system was moving over the western Gulf of Mexico to the north at 9 mph, and had sustained winds of 30 mph -- nine mph short of tropical storm force. According to the NHC, the weather system was 475 miles south of Morgan City, La., as of late Thursday afternoon.

AccuWeather forecasters say the system could further develop into a tropical depression or subtropical storm later Thursday night or Friday morning. Further organization is possible into Friday night, with the potential for the system to strengthen enough to be named Tropical Storm Claudette, the third named system of the young 2021 Atlantic hurricane season -- which would take place about two months ahead of average in the basin.

Further organization is possible into Friday night, with the potential for the system to strengthen enough to be named Tropical Storm Claudette, the third named system of the young 2021 Atlantic hurricane season -- which would take place about two months ahead of average in the basin.

The storm is expected to make landfall along the Gulf coast, most likely along the Louisiana coastline Friday night to early Saturday as a 1 on the AccuWeather RealImpact Scale™ for Hurricanes due primarily to the risk of flooding rainfall. Even though it isn't expected to strengthen beyond tropical storm status -- and potentially beyond subtropical storm status - before striking the United States, it will unleash torrential rainfall and lead to flooding, particularly in Louisiana and Mississippi, areas that have already endured flooding in recent weeks.

The AccuWeather RealImpact Scale™ for Hurricanes uses a 6-point system ranging from less than 1 and 1 to 5 in terms of wind, rain and other impacts to lives and property from hurricanes and tropical storms. In comparison, the Saffir-Simpson hurricane scale only takes into consideration the strength of the wind on its 5-point scale ranging from Category 1 to Category 5 to rank hurricane intensity. 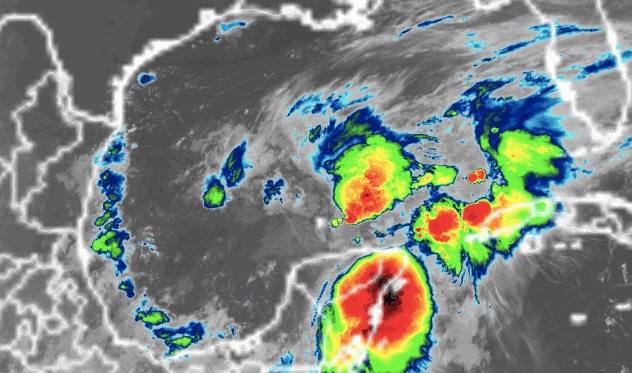 Those with outdoor plans either at home, camping or at the beach may want to consider alternatives in much of the Southeastern states this weekend due to anticipated stormy conditions.

As of Thursday midday, clusters of showers and thunderstorms over the central and western Gulf of Mexico and southeastern Mexico remained disorganized, AccuWeather senior meteorologist Rob Miller said.

"While there continued to be a low-level circulation evident over the southwestern Gulf, winds blowing at different directions and strength higher up in the atmosphere, known as wind shear, were preventing organization and gathering of moisture near the center of the storm just above the surface of the water," Miller explained.

The same disruptive winds at midlevels of the atmosphere were forcing a significant amount of dry air into part of the poorly organized storm. 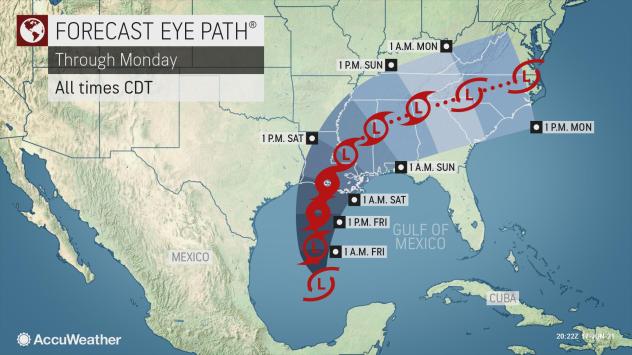 AccuWeather meteorologists believe that enough organization will take place as the system drifts northward into Friday night for a tropical or subtropical storm to form.

"Since dry air and wind shear will remain prevalent, strengthening beyond a moderate tropical storm is highly unlikely, and there is a chance the system may stop short of tropical storm strength entirely," Miller said.

Regardless of the official classification of the storm by the National Hurricane Center, heavy rain, gusty winds and severe thunderstorms will continue to be skewed to the eastern half of the storm until it progresses inland over southeastern Louisiana, Mississippi and Alabama this weekend. 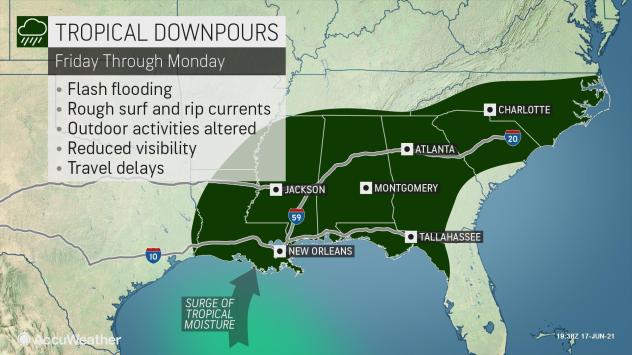 "This means that rain, gusty winds and stormy conditions in general will precede the center of the storm by many hours with deteriorating conditions likely on Friday, ahead of the storm's projected landfall early Saturday morning," Miller explained.

Because of the storm's lopsided nature and the presence of dry air already on the storm's western side, southeastern Texas is likely to be spared from persistent heavy rain. Still, there may be sporadic showers and thunderstorms that erupt into this weekend.

In addition to building seas, which will make for hazardous conditions for small craft and dangerous rip currents for bathers over much of the Gulf, minor inundation of low-lying coastal roads can occur for a time near and east of where the center makes landfall by 100 miles or more due to the sprawled-out circulation of the storm. 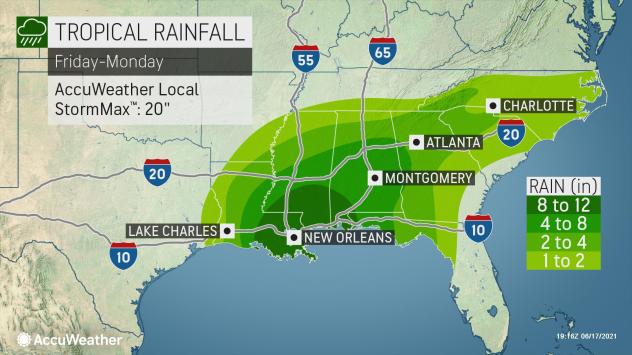 The risk of severe thunderstorms, including isolated tornadoes and waterspouts, is also expected to increase near and east of the center where the storm moves inland. At first, the tornado risk will be confined to the Interstate 10 corridor in Louisiana, Mississippi, Alabama and the Florida Panhandle, but it may expand northeastward over the Southeastern states as the weekend progresses and perhaps into early next week as well.

Once inland, heavy rain will begin to expand more on the storm's northern side, with the greatest risk of gusty winds, severe thunderstorms and sporadic downpours likely to occur over the storm's southeastern side.

Since the storm is forecast to continue to move along at a steady pace after reaching the central Gulf coast, 40- to 60-inch rainfall amounts are not anticipated like that which occurred from Harvey over Texas in 2017. Harvey produced disastrous flooding in part of the Houston and Port Arthur, Texas, areas. However, a broad area of 6- to 12-inch rainfall is anticipated with an AccuWeather Local StormMax™ of 20 inches.

In some cases, rainfall of 1-2 inches per hour can pour down over a several-hour period.

The expected rainfall, combined with wet ground and elevated stream and river levels from prior heavy rain since early May, is likely to lead to flooding. Parts of Louisiana and Mississippi have picked up 1-2 feet of rain since the start of last May. At the very least, flooding of streets, highways and low-lying areas are likely with the potential for significant rises on bayous and rivers above existing elevated levels prior to the storm's arrival. 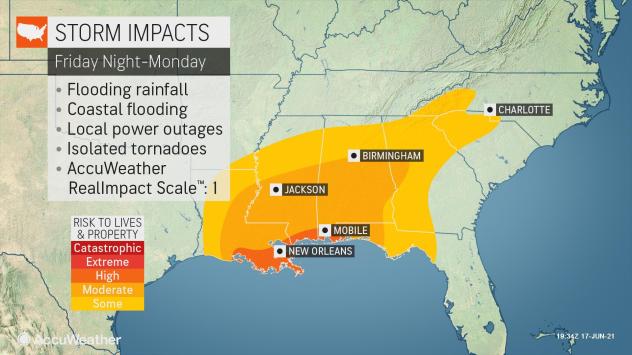 Closer to the Gulf Coast, where the system will first move inland as a tropical storm, winds will blow at 40-60 mph with an AccuWeather Local StormMax™ of 70 mph, over a zone stretching from southern Louisiana to southern Mississippi, southern Alabama and the far western portion of the Florida Panhandle. The system's strong winds will spread out over time as it begins to transition from tropical to non-tropical while over land. As the system undergoes the transition, widespread winds of 30-40 mph are expected over the Southeastern states.

The combination of wet ground and stiff winds can be enough to knock over poorly rooted trees and snap tree limbs. Sporadic power outages could result from the Gulf Coast to perhaps as far inland as portions of the Interstate 20 corridor of Louisiana, Mississippi, Alabama, Georgia and South Carolina. 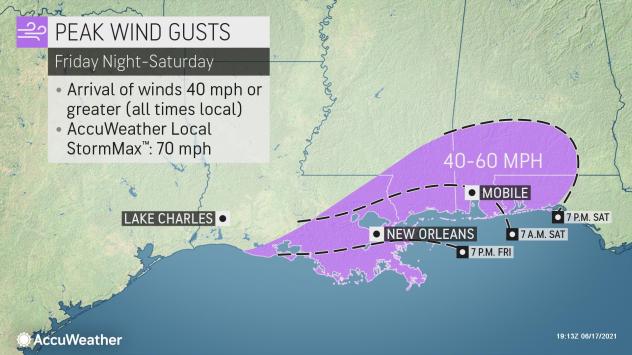 If a center of circulation survives as the system churns northeastward across the interior Eastern states, even if it doesn't remain classified as a tropical disturbance, then there will be a chance that the storm may regenerate and strengthen off the Atlantic coast next week. The system could trigger drenching rain, gusty winds and rough seas should it track northeastward along or just off of the coast of the mid-Atlantic and New England next week.

Even though the potential formation of the "C storm" is well ahead of the average pace in the Atlantic, it will fall short of records. The earliest-ever C-named storm was Cristobal from just last year during the record 2020 hurricane season that went on to produce 30 named systems. Cristobal developed on May 30, but the average date for formation of the third tropical storm of the season is not until the middle of August. So, if the Gulf of Mexico system is named Claudette, it would be about two months ahead of average. 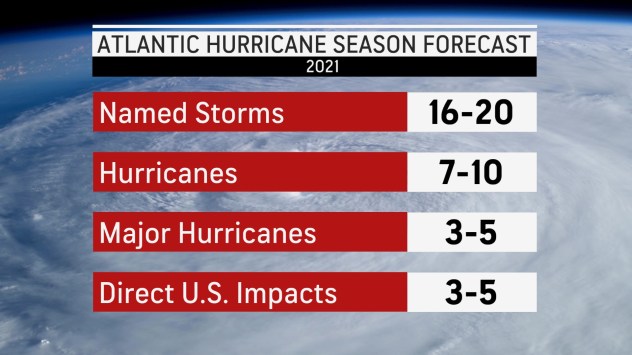 Beyond the emerging threat in the Gulf of Mexico, AccuWeather meteorologists anticipate a very active hurricane season for 2021 with 16-20 named storms and three to five direct impacts on the U.S.