By
James Barragan, The Texas Tribune

The border fence that connects El Paso, to Juarez, Mexico, runs right next to a landscaping business just off the 375 loop freeway in El Paso on February 12, 2019. On Wednesday, Texas Gov. Greg Abbott said the state will initially spend $250 million on building a border wall. File Photo by Natalie Krebs/UPI | License Photo

Gov. of Texas Greg Abbott said some of the funds for the wall will come from the Texas Department of Criminal Justice. File Photo by Jemal Countess/UPI | License Photo

People in El Paso, Texas, wave through the border wall to their families in Ciudad Juarez, Chihuahua, on October 26, 2019. File Photo by Justin Hamel/UPI | License Photo

The Mexico-U.S. border fence is seen from the Gateway International Bridge between Matamoros, Mexico, and Brownsville, Texas, on January 10, 2019. File Photo by Patrick Timmons/UPI | License Photo

June 16 (UPI) -- Texas Gov. Greg Abbott on Wednesday announced some new details of his plan for the state to build its own border wall, starting with the hiring process for a program manager and providing $250 million in state funds as a "down payment."

"Texas will build a border wall in our state to help secure our border," Abbott said.

The governor did not specify how long the wall would be, where it would be built or the total cost of the project, saying that those decisions will need to be determined by a program manager. On Wednesday, Abbott directed the Texas Facilities Commission to hire a program manager to begin that work.

A commitment to building a wall along the entire U.S.-Mexico border was a hallmark of former President Donald Trump's time in office. His administration built about 450 miles of barrier, mostly in Arizona, according to The Washington Post. But Trump, who is touring the border with Abbott later this month, also met fierce resistance from private property owners unwilling to allow the federal government to build on their land.

Abbott said he expected people to both donate their own money and volunteer their land for the barrier.

​"My belief based upon conversations that I've already had is that the combination of state land as well as volunteer land will yield hundreds of miles to build a border wall in Texas," he said.

The funds for Texas' $250 million "down payment" will come from the state budget. Lawmakers will allocate money from the Texas Department of Criminal Justice into a disaster account, which will then be moved to the Texas Facilities Commission for the border wall construction. Lt. Gov. Dan Patrick, House Speaker Dade Phelan and the Legislature's top budget writers Sen. Jane Nelson, R- Flower Mound, and Rep. Greg Bonnen, R- Friendswood, joined Abbott for his announcement Wednesday and signed a document allowing the transfer of the money.

The move took Democrats who oppose a border wall by surprise. Sen. Cesar Blanco, D-El Paso, said he had "zero indication" when debating the budget during the legislative session that the money would be used for a border wall.

Abbott acknowledged that construction of a wall would cost "far more than $250 million" but said he and lawmakers will follow through with their plan.

Federal lawmakers have said building portions of the wall in Texas cost $26.5 million per mile. The Biden administration, which has ordered the federal government to stop construction of the wall where possible, said last week that building the wall cost taxpayers $46 million per mile in some areas along the border.

Texas will also take private donations for construction of the border wall at borderwall.texas.gov. Abbott said the website will be monitored by his office and the Texas Department of Emergency Management and all the money donated would be publicly tracked and accounted for.

The governor was surrounded by a slew of lawmakers for his announcement, including Patrick and Phelan -- the leaders of the two chambers of the Legislature. No Democrats or state officials from the border were present, but Abbott said local officials from border counties had urged him to take action.

Critics have questioned the state's authority to venture into immigration regulation, which is the purview of the federal government under the Constitution. The League of United Latin American Citizens has threatened to sue the state as soon as Abbott finalized his plan for the border wall.

Abbott's office did not immediately respond to a question about the state's authority to build a border wall, but the two-term Republican governor has blamed President Joe Biden for the increase of migrants on the state's southern border.

"The Biden administration has abandoned its responsibility to apply federal law to secure the border and to enforce the immigration laws and Texans are suffering as a consequence of that neglect by the Biden administration," he said. "In the federal government's absence, Texas is stepping up to get the job done."

Abbott said he will send a letter to Biden asking the federal government to return land the Trump administration took from private property owners in Texas to build a border wall. He also said Texas would ask those property owners to use their land to build a state-funded wall.

Land Commissioner George P. Bush said Wednesday he would grant emergency authorization for the building of the wall on state lands. The state owns approximately 591,595 surface acres along the border.

Abbott has blamed Biden's immigration policies for the increase of immigrants on the state's southern border, saying in an earlier disaster declaration that new federal policies have paved the way for "dangerous gangs and cartels, human traffickers, and deadly drugs like fentanyl to pour into our communities." Last week, Abbott announced a partnership with the state of Arizona calling for other states to send law enforcement officials to help border states arrest and jail immigrants crossing the border.

There were 180,034 border crossings last month, compared to fewer than 25,000 border crossings in late 2020, according to data from the U.S. Customs and Border Protection. During the Trump administration, the highest recorded number of apprehensions was nearly 150,000.

Earlier in the year, Abbott deployed Texas National Guard troops to the border and ordered the Texas Department of Public Safety to arrest immigrants and charge them for state laws such as trespassing, illegal entry, smuggling and human trafficking.

Immigrant rights advocates have said arresting and prosecuting immigrant parents who cross the border with their children seeking asylum could lead to the same separation of families seen under the Trump administration. Advocates have also expressed concern that the move essentially criminalizes seeking asylum.

In response to a question about asylum seekers, Abbott responded that he was focused on the effects of increased immigration and drug smuggling on Texans.

"Texans on the border are suffering through a humanitarian crisis by having their lives disrupted with guns and gangs and being riddled with crime," he said. "We have a responsibility as leaders of this state to step up and address their humanitarian crisis and that is what began today."

David Donatti, staff attorney at the ACLU of Texas, said in a statement state officials are trying to reinstate harmful policies implemented by the Trump administration.

"Abbott's proposal could tear families apart at the border and allow law enforcement to terrorize people arriving in the United States in search of safety and refuge," he said. "The announcement shows how little Abbott and his cohorts care about fellow Texans."

U.S. Rep. Veronica Escobar, D-El Paso, blasted Patrick for likening the increase of immigration at the border to an "invasion," which she said is rhetoric used by white supremacists like the alleged El Paso shooter who wrote online before the killing that he wanted to stop a "Hispanic invasion."

"Texans will get this done," Patrick said. "We will not let our state and our country be invaded."

Escobar responded on Twitter: "If people die again, blood will be on your hands."

Patrick did not immediately respond to a request for comment.

Abbott's plan to crowdfund the border wall's construction is reminiscent of We Build The Wall, a private fundraising effort that raised more than $25 million for construction of a border wall. Last year, four people involved in We Build The Wall - including Steve Bannon, Trump's former adviser - were charged with allegedly defrauding donors to the effort. Trump pardoned Bannon before leaving office in January.

The plan has another parallel to a 2011 effort by the Arizona Legislature to create a website that raised funds for constructing a fence on its Mexico border. That effort received almost $270,000 by 2014, and an advisory committee gave most of it in 2015 to a county sheriff who invested the money in security technology like GPS systems, according to The Arizona Republic. 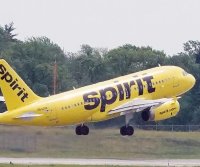 U.S. News // 4 hours ago
Obama scales back 60th birthday celebration due to COVID-19 surge
Aug. 4 (UPI) -- Former President Barack Obama has scaled back plans to celebrate his 60th birthday this weekend in New England, due to a resurgence of COVID-19.