The shooting occurred before dawn at the Mueller fire hydrant factory in Albertville, located about 30 miles southeast of Huntsville and 60 miles northeast of Birmingham.

Police said a worker at the factory opened fire at coworkers before fleeing in a vehicle.

The vehicle and the suspect's body were later found nearby, authorities said.

"The person was deceased from what appears to be a self-inflicted gunshot wound," Albertville Police Chief Jamie Smith said, according to AL.com.

Two other workers were injured in the shooting.

Neither the shooter nor the victims were immediately identified.

U.S. News // 53 minutes ago
U.S. inflation gauge rose in June by largest amount in 30 years
July 30 (UPI) -- A key signal that measures inflation in the United States increased by nearly 4% during the month of June, the Commerce Department said Friday. 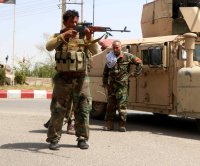 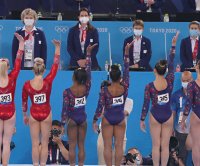 U.S. News // 11 hours ago
Calif. court strikes law on transgender pronoun use in nursing homes
July 30 (UPI) -- A California appeals court has struck down a provision in a state law that made it a crime for staff members at nursing homes to "willfully and repeatedly fail to use a resident's preferred name or pronouns.

U.S. News // 15 hours ago
Navy charges sailor in 2020 Bonhomme Richard fire
July 29 (UPI) -- The U.S. Navy charged a sailor in connection with evidence found during an investigation into the 2020 fire that destroyed the USS Bonhomme Richard, officials said Thursday.

U.S. News // 18 hours ago
Hudson Yard's Vessel shutters after fourth death
July 29 (UPI) -- New York City's the Vessel landmark was shuttered in response to a visitor who died by suicide Thursday, about two months after reopening in the wake of other deaths.
Advertisement