FBI Director Christopher Wray pledges to 'do better' in hearing on Jan. 6 riot 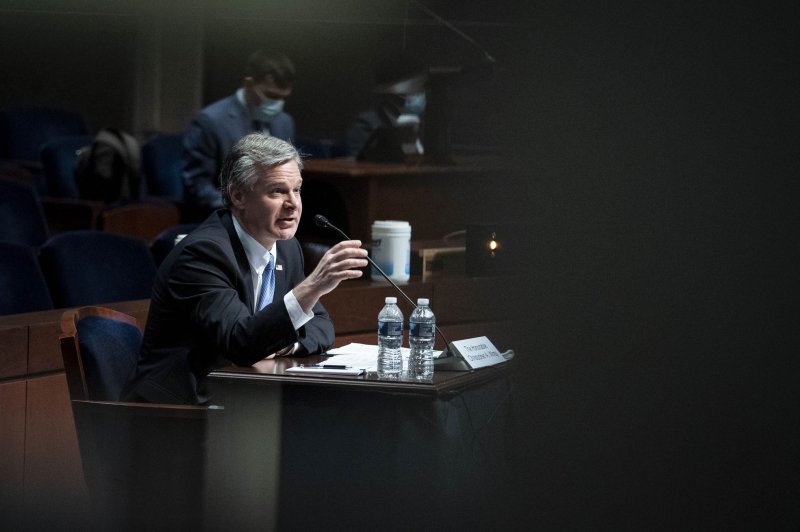 June 10 (UPI) -- The FBI will "do better" in handling intelligence, FBI Director Christopher Wray said Thursday during a congressional hearing about the Jan. 6 U.S. Capitol riot.

"Obviously, anytime there is an attack, especially one as significant as this one, you can be darn sure that we are going to be looking hard at how we can do better, how we can do more, how we can do things differently in terms of collecting, analyzing and disseminating intelligence," Wray said during the hearing.

Wray made the remarks after House Judiciary Committee Chairman Rep. Jerry Nadler, D- N.Y., grilled him about documents the committee had received from the bureau showing that several violent extremists were already under investigation and were preparing to travel to Washington, D.C., in January.

"Congress needs to hear glass breaking, doors being kicked in and blood being spilled," a report from FBI Norfolk warned the day before the riot, Nadler said, adding the report also noted individuals sharing tunnel maps for the Capitol complex and listing "rallying points" to gather before the attack.

"We know that the Norfolk report made it to the FBI's Washington field office in advance of the attack, and yet for days after the attack the head of that field office insisted that it had received no intelligence suggesting anything other than First Amendment activity," he said.

"Director Wray, the warnings coming in from around the country were clear," Nadler continued. "Here in Washington, did the FBI simply miss the evidence or did it see the evidence and fail to piece it together?"

Wray responded that the Norfolk report "was a specific piece of raw, unverified intelligence," and was "from a source online, unvetted," but it was still "quickly passed" onto the U.S. Capitol Police.

Wray also responded to Nadler's questions about individuals already under investigation prior to the attack. He said that the FBI had disseminated "about a dozen intelligence products, including warning of domestic violence extremism relating to the election."

Of 500 arrests made for attack on the Capitol, almost none of them were individuals previously being investigated, Wray added.

"First and foremost, I want to assure you, your staff, and the American people that the FBI has deployed our full investigative resources and is working closely with our federal, state, local, tribal, and territorial partners to aggressively pursue those involved in criminal activity during the events of January 6, 2021," Wray added in his statement before the House Judiciary Committee.

Wray did not confirm nor deny whether the FBI was investigating whether former President Donald Trump incited the riot, or any of his aides or members of Congress, NBC News reported.

U.S. News // 14 hours ago
Four injured, one critically, after bus crashes through Calif. parking lot
Dec. 3 (UPI) -- Four people remained hospitalized Saturday, including one with critical injuries, after a transit bus crashed into more than a dozen vehicles in a California shopping center parking lot.

U.S. News // 15 hours ago
Tampa police chief placed on leave after golf cart traffic stop
Dec. 3 (UPI) -- The police chief of Tampa, Fla., has been placed on administrative leave after flashing her badge at a deputy who had stopped her while she and her husband were riding golf cart.

U.S. News // 18 hours ago
Pentagon unveils B-21 Raider, 1st new strategic bomber since Cold War
Dec. 3 (UPI) -- The U.S. Air Force has publicly unveiled the new B-21 Raider, the Pentagon's first new long-range strike bomber since the Cold War and touted as the "backbone" of a modernized bomber fleet.

U.S. News // 19 hours ago
Body of missing Texas girl found; Fedex driver charged with murder
Dec. 3 (UPI) -- The body of a missing 7-year-old North Texas girl has been found near her home and a delivery driver stands charged with kidnapping and murder in connection with her death, sheriff's officials say.