June 3 (UPI) -- The dry weather pattern that the Northeast briefly enjoyed has come to an end while portions of the Southeast can expect an opportunity for some much-needed rain.

Widespread rounds of severe weather and flooding are not anticipated in the eastern third of the nation into the end of the week. However, AccuWeather meteorologists caution that isolated incidents of thunderstorms with damaging winds and the potential for brief urban flooding will be possible.

From Friday to Sunday of Memorial Day weekend, a slow-moving and unusually cold storm drenched the northeastern United States with 1 inch to 3 inches of rain and left the ground saturated.

Even though two to three days of dry weather has followed that nor'easter, the ground is still rather moist in much of the region.

"The risk of flash flooding is a bit higher than average at this point for the parts of the central Appalachians, mid-Atlantic and southern New England, where the bulk of the rain from last weekend's storm occurred," AccuWeather senior meteorologist Dave Dombek said.

The moist ground may become quickly saturated by downpours forecast to pivot through the region into Friday. That can lead to ponding in poor drainage areas and quick rises along some of the smaller streams in the region. 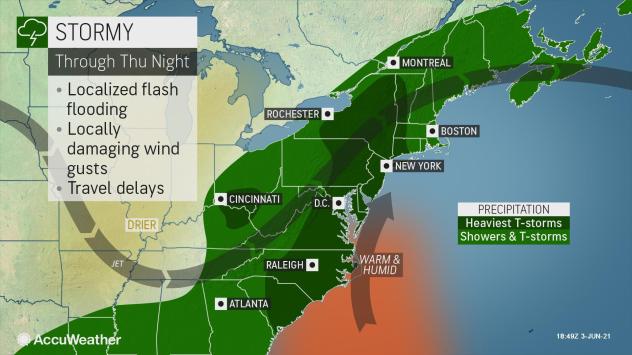 However, with this setup, flooding of small streams should be an isolated event.

The main problem with the showers and thunderstorms forecast to move through will be travel delays and the risk of street and highway flooding in areas prone to taking on water during heavy rain events, according to AccuWeather senior meteorologist Dan Pydynowski.

In this case, the storm system forecast to cause the downpours should keep moving along and any urban-style flooding should be brief. However, motorists should expect slowdowns on the highways due to the downpours. Underpasses prone to flooding could become submerged in the most extreme cases.

The showers and thunderstorms are forecast to retreat to the east and out to sea Friday, but there is likely to be some lingering shower and thunderstorm activity along the immediate Atlantic seaboard for a time. 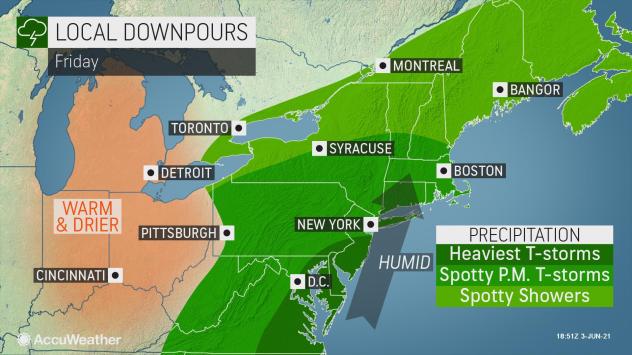 Another aspect of the weather pattern into Friday will be the potential for locally robust thunderstorms.

"While widespread severe thunderstorms are not expected, some of the storms can become strong enough to bring brief gusty winds from North Carolina to New York state into Thursday night," AccuWeather meteorologist Jake Sojda said.

A few communities could be hit by a storm that pulses at the right time in the central Appalachians and mid-Atlantic during the afternoon or early evening hours. These storms could have the potential to knock down trees and even cause minor property damage.

Even though widespread severe weather is not anticipated, a few isolated severe storms can still occur. Within the small number these storms, a brief tornado or waterspout cannot be completely ruled out.

As the spotty, heavy, gusty storms roll through the corridor from New York City to Philadelphia, Washington, D.C., and Charlotte, N.C., during Thursday afternoon and evening, some airline delays can result.

Rain is needed over the southern Atlantic states and this system is likely to deliver some moisture into Friday. The storm that soaked the Northeast over the holiday weekend barely grazed much of the Southeast as the region only received a brief round of showers and thunderstorms.

A general soaking with 0.50 of an inch to 1 inch of rain is likely from eastern South Carolina to much of North Carolina and southern Virginia into Friday of this week. Locally higher amounts to 2 inches are possible. 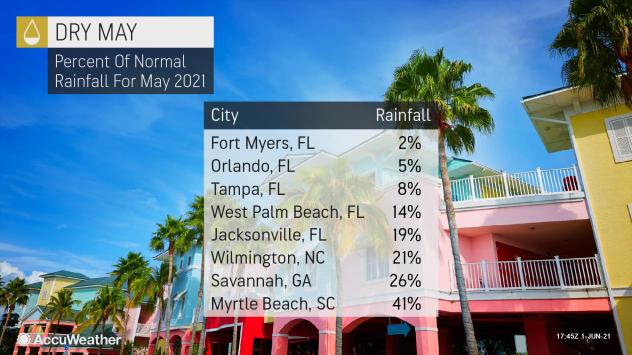 "Rainfall during May has been well below average in the zone from the Florida Peninsula, northward to Virginia during May, while most areas farther west have had normal to above-average rainfall during the prior month," AccuWeather Senior Meteorologist Brett Anderson said.

Charlottesville, Va., and Wilmington, N.C., received less than an inch of rain during May, compared to an average of around 5 inches for the month. 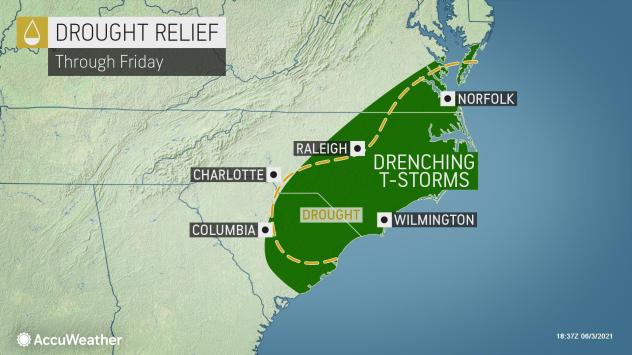 "May dryness in the Southeast states has been most significant over the Florida Peninsula, but now that the daily regime of thunderstorms has resumed with the formation of high pressure over the central Atlantic, the region should see an uptick in downpours," Anderson explained.

June marks the start of the rainy season over the Florida Peninsula as moisture from the Atlantic Ocean produces morning showers on the Atlantic coast which then billow into thunderstorms over the interior during the midday and afternoon hours.

Miami averages about 5 inches of rain in May but typically receives double that amount in June. During the middle and latter part of the summer season, thunderstorms and tropical systems supply the moisture.

During the weekend in the Southeast, the potential for spotty thunderstorms along the Carolina coast will continue as storms will tend to riddle the Florida Peninsula. Most interior locations of the Southeast are likely to be free of rain with perhaps a slight reduction in humidity. 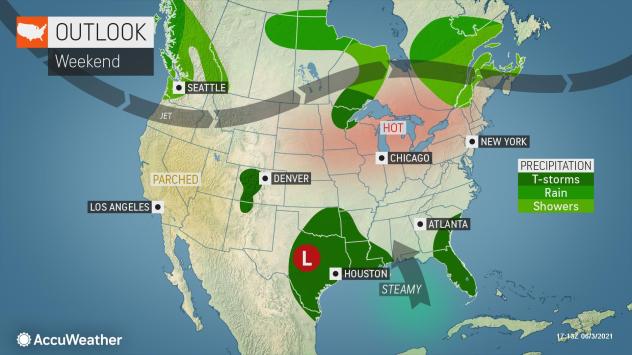 Farther north, the weather this weekend should put a smile on the faces of millions who were shivering and peering out their window at the rain from the holiday weekend.

Less humid air will settle into the Northeast and heat is forecast to build across the Great Lakes and northern tier later this weekend. By early next week, many parts of the Northeast will be experiencing the first heat wave of 2021.