May 28 (UPI) -- Vice President Kamala Harris told the graduating class of the U.S. Naval Academy on Friday they will be counted on to mount a "modern defense" against the threats that challenge America.

Harris' commencement speech marked the first time a woman has given the address in school history.

About 1,000 students graduated, with most commissioned as Navy ensigns or second lieutenants in the Marine Corps. The event was held at the Navy-Marine Corps Stadium in Annapolis, Md.

Harris said in speech America will depend on the military, including the academy graduates, to battle the threats of cybersecurity hackers, climate change and a future pandemic.

She said this new era includes the attacks of cyberhackers looking to capture information from American private companies and the military, as well as interfering in U.S. elections.

RELATED A 'feminist' foreign policy could change the world

"This, midshipmen, is the era we are in, and it is unlike any era that came before," she said. "The challenge is how to mount a modern defense to these challenges.

Harris told the midshipmen they would be counted on by the American people to combat these challenges.

"You are the ones to do it," she said. "The U.S. military is the best, the bravest and the most brilliant."

Women were first given permission to enroll in the service academies 46 years ago. On Friday, Midshipman First Class Sydney Barber, the first Black woman in the academy's history to serve as brigade commander, was among the graduates.

Presidents and vice presidents deliver commencement speeches on a rotating basis to the service academies. In 2018, former President Donald Trump gave the commencement address at the academy. He told the graduates that the military was "the most powerful and rightful force on the planet."

During an event aired by CNN on Sunday night, Harris praised members of the Class of 2021 on earning high school diplomas during the coronavirus pandemic.

"You now know that you have what it takes to get through pretty much anything. So when you come up against an obstacle, when you experience a setback -- and you will, we all do -- remember the resilience that you showed this past year," Harris said at the CNN event.

U.S. News // 4 hours ago
Criticized Arizona election audit to show Biden won more votes than Trump
Sept. 24 (UPI) -- The results of a widely criticized Republican audit of election ballots in Arizona are set to be released Friday -- although a draft report indicates that they will show an even larger margin of victory for Joe Biden. 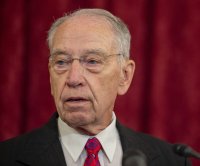