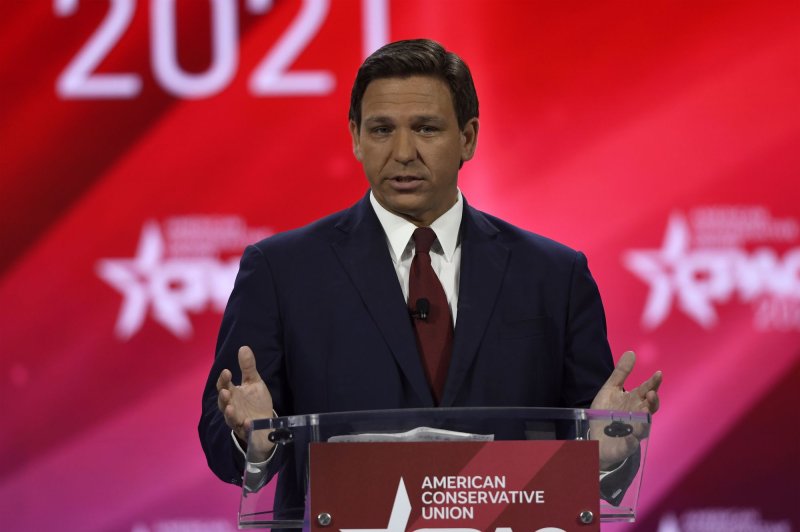 NetChoice and the Computer and Communications Industry Association filed a lawsuit Thursday seeking to block a Florida law that would penalize companies for censoring speech by residents and political candidates. File Photo by Joe Marino/UPI | License Photo

May 27 (UPI) -- A pair of tech companies filed a lawsuit Thursday to block a Florida law that would implement penalties for "Big Tech censorship" of citizens and political candidates.

NetChoice and the Computer and Communications Industry Association announced the lawsuit, saying the bill, which would allow fines, lawsuits and other penalties against tech companies that remove Floridians from their platforms, infringes on free speech and driven by politically motivated opposition to companies' moderation decisions.

Florida Gov. Ron DeSantis signed the law Monday which would allow "all Floridians treated unfairly by Big Tech platforms" to sue the companies for monetary damages up to $100,000 and institute fines of $250,000 per day on social media companies that remove candidates for statewide office from their platforms and $25,000 per day for those running for non-statewide offices.

It would also allow the state's attorney general to bring action to restrict tech companies that violate the law from contracting with any public entity under Florida's Unfair and Deceptive Trade Practices Act.

The lawsuit states that the law infringes on the First Amendment rights of tech companies by forcing them to host content they find objectionable and provides special treatment to political candidates.

Additionally, they note that the Walt Disney Company and Comcast, which own theme parks in Florida, are "arbitrarily" exempt under the law.

"The law is crony capitalism masquerading as consumer protection. Our lawsuit will stop an attempt by the state of Florida to undermine the First Amendment and force social media sites to carry offensive and harmful political messages," said Carl Szabo, NetChoice vice president and general counsel.

DeSantis representative Christina Pushaw said the governor believes the law has a "strong legal basis" in a statement to The Hill.

"It is recognized that the government has a role in protecting consumers against discrimination and deceptive/unfair trade practices and this law is within that authority to rein in a powerful entity that oversteps individuals' free speech rights," Pushaw said.

U.S. News // 15 hours ago
Shipment of 78,000 pounds of baby formula from Germany arrives in U.S.
May 22 (UPI) -- A shipment of infant formula arrived in Indianapolis on Sunday as the Biden administration works to address a nationwide shortage.

U.S. News // 18 hours ago
Intense heat scorches much of the East Coast, with more still to come
A major spell of heat has arrived on the East Coast, bringing the season's highest temperatures for many and even setting daily records for some.