The red color of the moon during a lunar eclipse comes from the sun's ray's filtering through Earth's atmosphere. File Photo by Ismael Mohamad/UPI | License Photo

May 21 (UPI) -- One of the top astronomical happenings of 2021 will unfold in the early morning sky on Wednesday as the Earth, moon and sun align perfectly to create a total lunar eclipse.

This will be the first event of its kind since 2019, when stargazers braved the cold wintry weather on the night of Jan. 20, to witness the moon turn red over North America.

During a penumbral lunar eclipse, the moon only passes through part of the penumbra, Earth's outer, brighter shadow. It can be very difficult to spot the different between a penumbral eclipse and a normal full moon even with the help of a telescope.

This month's total lunar eclipse will be much more eye-catching as the moon passes through the umbra, Earth's inner, darker shadow. 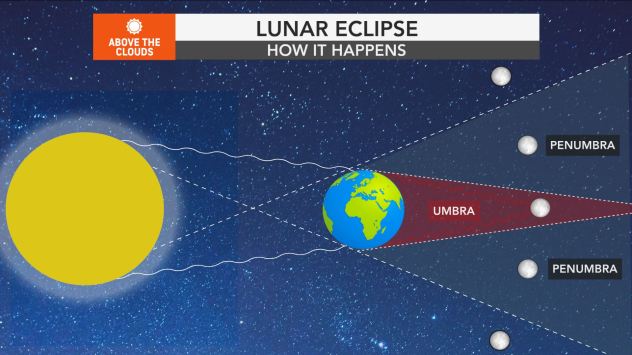 At least part of the upcoming eclipse will be visible across the Americas, Australia, New Zealand and Asia, but the total phase can only be seen from certain locations.

From North America, the total phase of the eclipse, the time when the moon turns orange or red in color, can only be seen from the western U.S., British Columbia, Alaska and western Mexico.

The balance of the continent will witness only the first partial phase of the eclipse before the moon sets in the western sky, and therefore missing out on the best part of the celestial show. 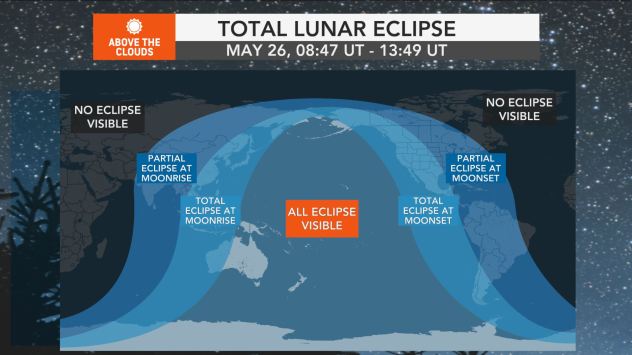 A loud alarm clock and a strong cup of coffee may be needed for some onlookers to see the eclipse, in addition to cloud-free conditions, as it will unfold hours before daybreak over the contiguous U.S.

Residents of Hawaii may spend a good portion of the night awake as it starts late on Tuesday, leading up to totality a little over an hour after midnight, local time.

Folks hoping to see the astronomical alignment will want to check the AccuWeather App before going to bed on May 25, to make sure that they don't wake up early to a cloud-covered sky. 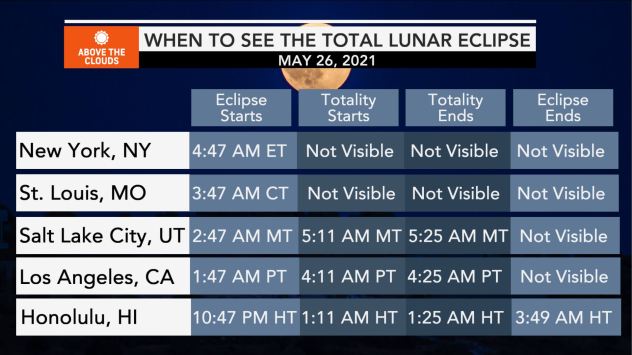 The best weather for Wednesday's eclipse is expected across the Southwest and into the southern Rockies, although there may be enough breaks in the clouds for folks across the Pacific Northwest to see the moon turn red.

Mainly clear conditions are also in store for the Southeast, but residents will only get good views of the partial phase of the eclipse before the moon dips below the horizon.

Clouds will be a concern from Kansas City through Chicago and Toronto as a disturbance moves over the region. 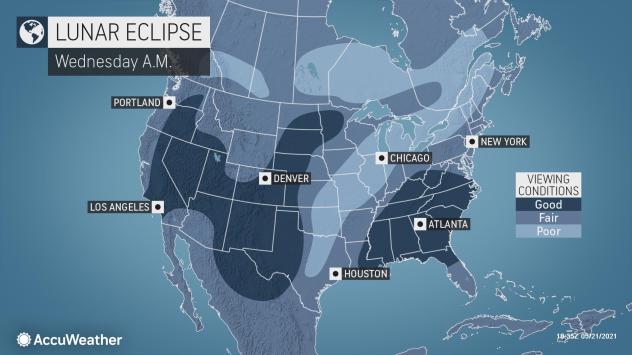 The entire eclipse will last for several hours, but the total eclipse itself will only last for 14 minutes, so this brief window is the most important part for Mother Nature to cooperate.

Why will the moon turn red?

Total lunar eclipses have been given the unofficial nickname of "blood moons" in recent years due to the change in color that happens during the height of the event.

"The red color comes from sunlight filtering through Earth's atmosphere - a ring of light created by all the sunrises and sunsets happening around our planet at that time," NASA said.

"Just how red it will look is hard to predict, but dust in the atmosphere can have an effect, and keep in mind there have been a couple of prominent volcanic eruptions recently," NASA explained.

This month's eclipse will also be a supermoon, meaning that the moon will appear slightly bigger than other full moons throughout the year.

Additionally, May's full moon is often called the Flower Moon due to the abundance of flowers that are blooming ahead of summer, The Old Farmer's Almanac said.

When all of these nicknames are combined, it creates a "super blood flower moon eclipse," but despite the long-winded name, it will look similar to total lunar eclipses in years past.

The next lunar eclipse is set to unfold in a little less than six months when the moon once again passes through Earth's shadow.

The same areas of the world that have a chance to witness this month's eclipse will also be lined up to see November's eclipse with the addition of Atlantic Canada and far western Europe.

U.S. News // 11 minutes ago
LA Lakers sign deal with food company Bibigo for new jersey patch
Sept. 21 (UPI) -- The NBA's Los Angeles Lakers are replacing the sponsorship patch on their uniforms in a deal worth a reported $100 million over five years.

U.S. News // 23 minutes ago
Google to expand NYC campus with $2.1B Manhattan building
Sept. 21 (UPI) -- Tech giant Google announced on Tuesday that it will pay more than $2 billion to buy the New York City building where it presently leases ifs offices.

U.S. News // 3 hours ago
Johnson & Johnson says COVID-19 booster shot increases protection
Sept. 21 (UPI) -- Johnson & Johnson announced on Tuesday that its one-shot COVID-19 vaccine has performed well in real-world studies, offers long-lasting protection against the virus and boosts the immune system when given as a booster.

U.S. News // 14 hours ago
Summer snow creates wintry scenes around Yellowstone
Astronomical summer might not end for another day, but high-elevation areas in Montana, Idaho and Wyoming all saw their first snowfalls of the season this weekend, with more snow showers in the forecast.

U.S. News // 15 hours ago
Oklahoma sets 7 execution dates after 6-year hiatus
Sept. 20 (UPI) -- The Oklahoma Court of Criminal Appeals on Monday scheduled the executions of seven men, setting the stage for the state to carry out its first lethal injection in more than six years.