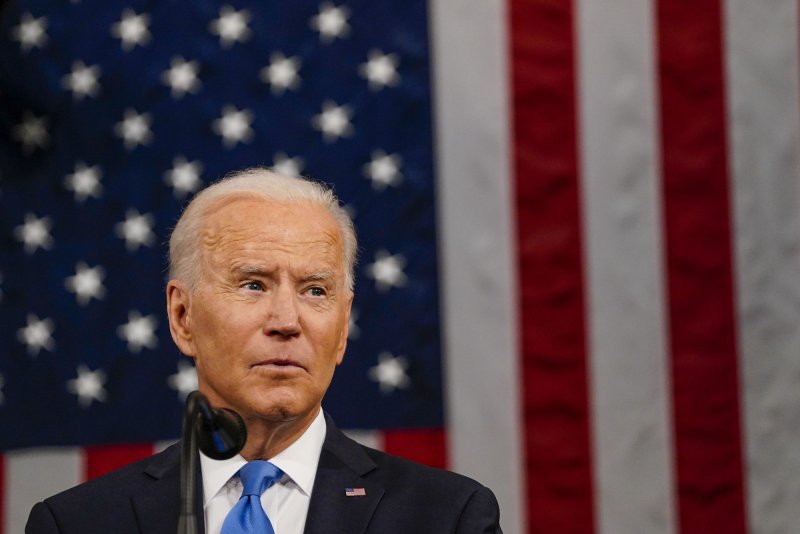 President Joe Biden details his American Families Plan during his first address to a joint session of Congress at the U.S. Capitol in Washington, D.C., on April 28. Pool Photo by Melina Mara/UPI  | License Photo

May 5 (UPI) -- A new economic analysis said Wednesday that President Joe Biden's American Families Plan, which proposes to earmark hundreds of billions for education and child investment, would cost about $700 billion more over 10 years than the plan projects.

The White House has said the plan will cost $1.8 trillion over the next decade. According to the study by the Penn Wharton Budget Model, about $2.5 trillion would be spent over that time for the sweeping proposal.

The Penn Wharton Budget Model is a nonpartisan, research-based economic initiative at the University of Pennsylvania.

The plan would pay for programs like universal prekindergarten, two years of tuition-free community college, expanded family and medical leave and provide monthly payments of at least $250 to low-income parents.

The proposal also would provide $800 billion in new tax cuts that benefit lower- and middle-income workers and families. Much of the plan would be paid for by tax increases for the wealthy -- including a hike to the capital gains tax rate, increased IRS auditing enforcement on richer Americans and businesses and a higher top income tax rate.

The Penn Wharton Budget Model also said Biden's plan would increase government debt by almost 5% and decrease gross domestic product by 0.4% by 2050. It would raise $1.3 trillion in new tax revenue over the 10-year period, from 2022 to 2031, which would fall short of paying for the entire package.

The study said the economic loss would result from the larger debt outweighing the gains from new programs.

The gap, the study says, is found mainly in differences concerning the funding required for the tax credits and the universal pre-K and free community college provisions. Researchers assumed the proposals would extend beyond the 10-year budget window.

The proposal hikes the top individual tax rate from 37% to 39.6% for the top 1% of earners. The capital gains tax rate for households making over $1 million would also rise to 39.6%.

Americans earning more than $400,000 per year would pay a 3.8% Medicare tax and the plan would tax unrealized capital gains above $1 million at death.

The study provided a breakdown of how much the revenue-raising provisions in the plan would generate.

It said additional revenue raised from more aggressive IRS tax collections from richer Americans would amount to $480 billion, and the income rate hike for the wealthiest Americans would be worth $111 billion. Another $376 billion would come from taxing gains at death, long-term capital gains and carried interest at ordinary rates.

Extending the limitation on business losses for non-corporate taxpayers would net another $162 billion and the Medicare tax about $139 billion.

President Joe Biden delivers his first address to a joint session of Congress, televised across the nation, as he approached his 100th day in office at the U.S. Capitol in Washington, D.C. House Speaker Nancy Pelosi, D-Calif., and Vice President Kamala Harris are behind Biden, the first time in history that two women are sitting on the dais behind the president. Pool Photo by Chip Somodevilla/UPI | License Photo

U.S. News // 1 hour ago
Bodies of man, woman found on MBTA train tracks in Boston suburb Quincy
Sept. 26 (UPI) -- The bodies of a man and woman were found on the MBTA's red line tracks in the Boston suburb of Quincy on Monday morning.

U.S. News // 1 hour ago
U.S. sets record for export of refined petroleum products
Sept. 26 (UPI) -- World energy supplies are at a premium due to Western-backed sanctions on Russia, but exports from the United States are helping offset some of the pain.

U.S. News // 7 hours ago
2 U.S. veterans captured by Russia in Ukraine return home
Sept. 26 (UPI) -- Two U.S. military veterans who were captured by Russian forces while fighting alongside Ukraine have returned home, according to a statement from one of their families.

U.S. News // 20 hours ago
East Coast on alert for Tropical Storm Ian's impacts
AccuWeather meteorologists warn that the tropical system they have been tracking for nearly a week will not only threaten to cause damage in Florida, but it could also bring widespread impacts to the East Coast.