A man walks past an international goods market in Beijing, China on January 9. Tuesday's report said the U.S. deficit with China widened by almost $7 billion to nearly $37 billion during the month of March. File Photo by Stephen Shaver/UPI | License Photo

May 4 (UPI) -- The U.S. international trade deficit rose to a record $74.4 billion in March with more imports on the books than exports, the Commerce Department said in a report Tuesday.

The record deficit -- the difference between what the United States buys from overseas and what it sells to other nations -- represents a 58% increase from the same period a year ago and marks the highest deficit since the data series began in January 1992.

The March deficit was up about $4 billion from February and occurred amid widening gaps with China ($36.9 billion) and Mexico ($8.4 billion). The deficit with the European Union decreased more than $2 billion.

"Stimulus has kept American consumers spending through the pandemic, but restrictions on high-contact industries have diverted consumer spending from domestically-produced services to goods, much of which are imported," Adams wrote in Greater Fort Wayne Business Weekly.

"As the pandemic comes under control in the United States, American consumers will spend less on imported goods, shrinking imports; and foreigners will buy more U.S. exports as their economies recover further." 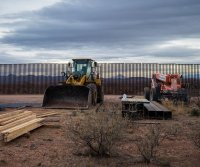 U.S. News // 1 hour ago
Record-smashing heat wave poised to send temps even higher
Death Valley, Calif., the record-holder for the highest air temperature ever recorded on Earth, 134 degrees Fahrenheit, could come fairly close to that mark later this week.

U.S. News // 2 hours ago
Lina Kahn confirmed to join FTC
June 15 (UPI) -- The Senate confirmed Lina Khan, who has complained that current antitrust laws are not adequate to deal with tech giants like Amazon, to the Federal Trade Commission on Tuesday.