Smoldering wreckage from a helicopter crash is seen on a hillside in Calabasas, Calif., on January 26, 2020. The crash killed NBA legend Kobe Bryant, his daughter Gianna and seven others. File Photo by John McCoy/UPI | License Photo

Vanessa Bryant is seen at the Celebration of Life for Kobe and Gianna Bryant at Staples Center in Los Angeles, Calif., on February 24, 2020. File Photo by Jim Ruymen/UPI | License Photo

Smoldering wreckage from a helicopter crash is seen on a hillside in Calabasas, Calif., on January 26, 2020. The crash killed NBA legend Kobe Bryant, his daughter Gianna and seven others.  File Photo by John McCoy/UPI | License Photo

Smoldering wreckage from a helicopter crash is seen on a hillside in Calabasas, Calif., on January 26, 2020. The crash killed NBA legend Kobe Bryant, his daughter Gianna and seven others. File Photo by John McCoy/UPI | License Photo

May 4 (UPI) -- Attorneys in Los Angeles County say Vanessa Bryant, widow of NBA star Kobe Bryant, has no legal basis to sue over photos shared by sheriff's deputies that were taken at the scene of the helicopter crash that killed her husband, daughter and seven others last year.

Vanessa Bryant is suing the county for invasion of privacy and says that four deputies took photos of the Jan. 26, 2020, crash scene on their personal cellphones "to take and share gratuitous photos of the dead children, parents and coaches."

Los Angeles County criticized the deputies for sharing the photos, but say in court documents that Vanessa Bryant does not have "viable legal claims."

"The county does not condone this showing of accident site photographs and has taken corrective personnel actions accordingly," they said.

"That does not mean, however, that plaintiff has viable legal claims. The two seminal cases involve public dissemination of pictures of human remains, and that did not occur here."

While offering "deepest sympathies and condolences" to Bryant's family, county attorneys argue that the lawsuit is not about the chopper crash that killed the former Los Angeles Lakers star, their 13-year-old daughter Gianna and seven other people.

"It is about accident site photographs," the documents, which were filed Friday and made available Monday, said.

County attorneys said Bryant's suit is not viable because the photos weren't posted online or shared with news media. They argue that showing accident site photographs to a member of the public does not qualify as invasion of privacy under California law.

A judge ordered the county in March to give the names of the deputies who shared the photos to Bryant, who then posted the names online. In her suit, she says the photos were shared with several members of the sheriff's department and some people outside the department.

The others who died in the crash were Alyssa Altobelli, Payton Chester, John Altobelli, Keri Altobelli, Sarah Chester, Christina Mauser and pilot Ara Zobayan. Alyssa and Payton were Gianna Bryant's basketball teammates and Mauser was an assistant coach.

The National Transportation Safety Board said in February that spatial disorientation caused by Zobayan flying through clouds and dense morning fog likely was a key factor in the crash.

U.S. News // 2 hours ago
Democrats introduce bill to raise debt ceiling, fund government
Sept. 21 (UPI) -- House Democrats on the Appropriations Committee introduced a bill Tuesday to keep the federal government running and suspend the debt ceiling past the 2022 midterms but Republicans are holding firm against it.

U.S. News // 3 hours ago
LA Lakers sign deal with food company Bibigo for new jersey patch
Sept. 21 (UPI) -- The NBA's Los Angeles Lakers are replacing the sponsorship patch on their uniforms in a deal worth a reported $100 million over five years. 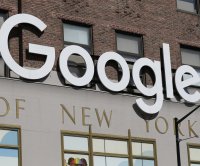 U.S. News // 3 hours ago
Google to expand NYC campus with $2.1B Manhattan building
Sept. 21 (UPI) -- Tech giant Google announced on Tuesday that it will pay more than $2 billion to buy the New York City building where it presently leases ifs offices.