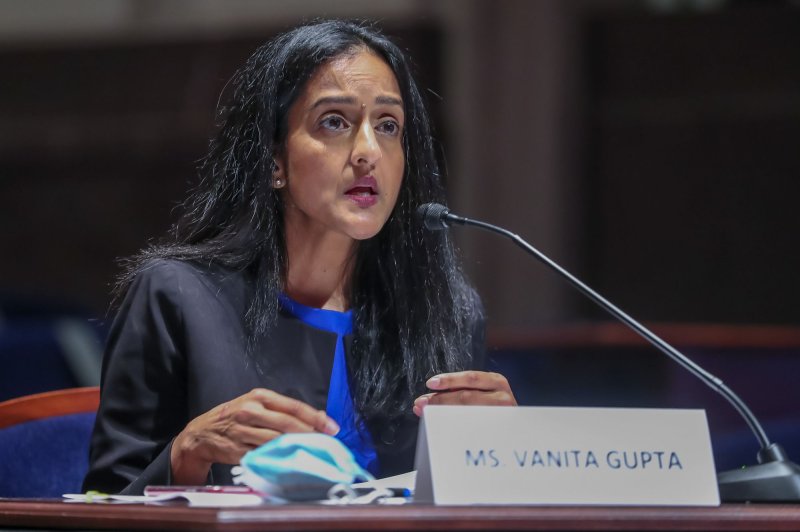 The Senate voted 51-49 on Wednesday to confirm Vanita Gupta as associate attorney general, making her the first woman of color to serve in the role in the history of the Justice Department. File Pool Photo by Michael Reynolds/UPI | License Photo

Sen. Lisa Murkowski, R-Alaska, was the lone Republican to break with her party and vote in favor of Vanita Gupta's confirmation Wednesday. File Pool photo by Chip Somodevilla/UPI | License Photo

Gupta, 46, will become the first woman of color to serve as associate attorney general in the history of the Justice Department after the 51-49 vote in which Sen. Lisa Murkowski, R-Alaska, was the only GOP lawmaker to vote for her confirmation as Vice President Kamala Harris was on hand to break a potential tie.

In the role, Gupta will oversee the department's civil rights litigation as well as its antitrust, civil and environment divisions as the third highest-ranking official in the agency, joining Attorney General Merrick Garland and Deputy Attorney General Lisa Monaco.

Senate Democratic leader Chuck Schumer, D-N.Y., said Gupta's confirmation was "very good news for the forces of equality and justice in the country."

Gupta faced harsh opposition from Republicans who described her as a "radical" nominee and accused her of altering her positions on issues such as drug legalization and police funding.

"She's levied attacks on members of this body, and during the confirmation process, she employed the loosest possible interpretation of her oath to deliver honest testimony," Senate Republican leader Mitch McConnell, R-Ky., said.

Murkowski explained her decision to support Gupta, saying she was initially troubled by some of her past statements but chose to vote in her favor after they had a lengthy conversation.

"I asked her point blank, 'Why do you want this? Is this worth it?' Because this has clearly been very hard on her as a nominee," she said. "And she paused and reflected a moment, and just spoke to how she feels called to serve in a very personal way that I thought was impactful."

Gupta's confirmation comes the same day that Garland announced the Justice Department will open an investigation into police practices in Minneapolis after a jury convicted former police officer Derek Chauvin in the killing of George Floyd.

President Joe Biden pushed for Gupta and Kristin Clarke, his nominee to lead the Justice Department Civil Rights Division, in a speech Tuesday following the verdict, stating they would "root out the unconstitutional policing and reform our criminal justice system."