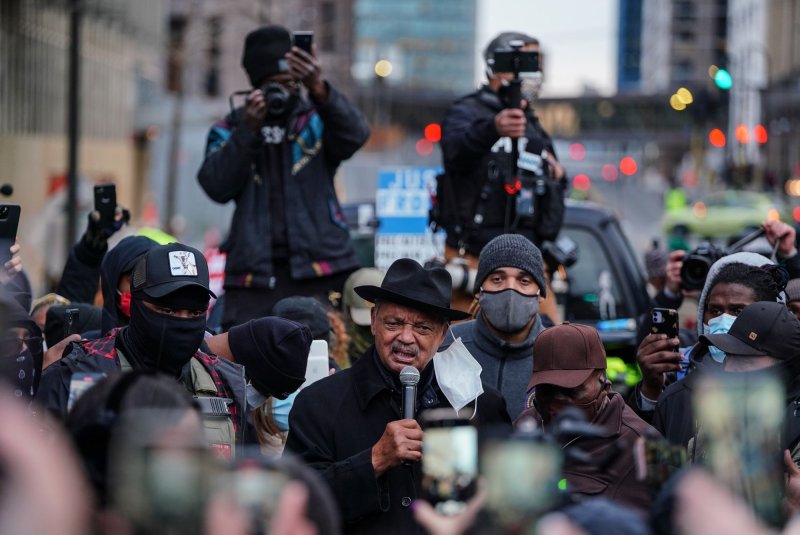 The Rev. Jesse Jackson speaks to protesters outside the temporary location of the Third Police Precinct during a march through downtown Minneapolis on Monday as jury deliberations began in the Derek Chauvin trial. Photo by Jemal Countess/UPI | License Photo

Police and members of the National Guard stand behind a barbed- wire fence at the temporary location of the Third Precinct as protesters march through downtown Minneapolis on Monday. Photo by Jemal Countess/UPI | License Photo

Sheridan Lair of Minneapolis holds up a sign as she protests on Monday in front of the site of the Derek Chauvin trial at the Hennepin County Government Center in Minneapolis. Photo by Jemal Countess/UPI | License Photo

April 20 (UPI) -- Officials have activated hundreds of members of the National Guard in Washington, D.C., and Illinois ahead of an anticipated verdict in the murder trial of Derek Chauvin, a former Minneapolis police officer charged with killing George Floyd.

The D.C. National Guard said in a statement Monday it has activated some 250 personnel to support local law enforcement at the request of D.C. Homeland Security and Emergency Management Agency Director Christopher Rodriguez.

The agency said the troops, who will be deployed until May 9, will assist local police with road closures at intersections to ensure the safety of pedestrian areas and to support the Metropolitan Police Department with providing a safe environment for people to express their First Amendment rights.

"This is our home, and we are dedicated to the safety and security of our fellow citizens of the district and their right to safely and peacefully protest," said Brig. Gen. Aaron R. Dean II, the adjutant general of the D.C. National Guard.

John Kirby, Pentagon press secretary, told reporters earlier Monday that the Army was looking at a request but had yet to make a decision on it.

Gov. J.B. Pritzker also activated 125 members of the Illinois National Guard starting Tuesday for the city of Chicago at the the request of Mayor Lori Lightfoot to assist the local police department.

In a statement, the Democratic governor's office said the Guard's mission will be limited to managing street closures, and they will not be permitted to interfere with peaceful protesters.

"It is critical that those who wish to peacefully protest against the systemic racism and injustice that holds back too many of our communities continue to be able to do so," Pritzker said.

He also tapped the Illinois State Police to aid the city's efforts to prevent violence and ensure protesters may demonstrate peacefully.

Lightfoot said she requested the troops out of an abundance of caution to ensure the city's safety.

"Our city has a long history of peacefully expressing its First Amendment rights, and I encourage residents to exercise their rights to free speech this coming week thoughtfully, respectfully and peacefully," she said.

The troops activated for Chicago are from the Illinois National Guard 33rd Military Police Battalion and have been specially trained for riots, the governor's office said.

The requests for Guard troops were approved as Chauvin's murder trial wrapped up its closing arguments and the 12 jurors began deliberations on Monday.

The trial's end also comes amid heightened tension across the country following a series of fatal police-involved shootings, including that of a 13-year-old boy in Chicago late last month.

Over the weekend, thousands took to the streets of Chicago after video of the graphic shooting of Adam Toledo was released to the public.

Chauvin has been charged with the Memorial Day killing of Floyd, whose death sparked protests against racial inequality and police brutality nationwide. 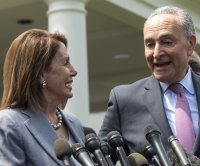 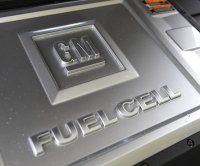