A mural of Breonna Taylor, who was killed in her apartment by Louisville, Ky., police officers is seen on a basketball court in Annapolis, Md., on July 8, 2020. File Photo by Jim Lo Scalzo/EPA-EFE

Protesters march with an effigy of Breonna Taylor during a demonstration in Los Angeles, Calif., on September 23, 2020. File Photo by Kyle Grillot/EPA-EFE

Activists rally near Jefferson Square Park in Louisville, Ky., on September 24, 2020, after a grand jury decided not to indict any police officers for the death of Breonna Taylor. File Photo by Mark Lyons/EPA-EFE

A woman protests in support of Breonna Taylor in Oakland, Calif., on September 23, 2020. File Photo by John G. Mabanglo/EPA-EFE

Activists wave flags during the 57th Anniversary of the March on Washington at the Lincoln Memorial in Washington, D.C., on August 28, 2020. The march was a call to justice to end police brutality. File Photo by Jemal Countess/UPI | License Photo

April 16 (UPI) -- Publisher Simon & Schuster says it won't distribute a book written by a Louisville police officer who was part of the controversial raid that killed Breonna Taylor more than a year ago.

Sgt. Jonathan Mattingly's book, The Fight for Truth: The Inside Story Behind the Breonna Taylor Tragedy, is being published by Post Hill Press.

Simon & Schuster, which made the announcement late Thursday, distributes books published by Post Hill Press, a Tennessee-based publisher. The company said it had only recently learned of the book's existence.

"We have subsequently decided not to be involved in the distribution of this book," Simon & Schuster said in a statement.

Mattingly was part of a botched "no-knock" drug raid at Taylor's Louisville apartment on March 13, 2020. He fired six shots during the confrontation after he was shot in the thigh by Taylor's boyfriend Kenneth Walker, who later said he thought the officers were intruders.

The FBI concluded that another officer, Myles Cosgrove, fired the shots that killed the 26-year-old Taylor. In all, police fired nearly three dozen bullets into the apartment.

Sam Aguiar, a Louisville attorney who represented Taylor's mother in a civil lawsuit against Louisville, thanked Simon & Schuster for its decision not to distribute Mattingly's book.

"This book will be a joke and do nothing to expose all the things he's been hiding," Aguiar said, according to the Louisville Courier Journal.

This is the second time in three months that Simon & Schuster has pulled out of a book agreement involving a high-profile author. In January, it abandoned a book by Missouri Sen. Josh Hawley following his continued support for protesters and supporters of former President Donald Trump who attacked the U.S. Capitol on Jan. 6.

"[We] cannot support Sen. Hawley after his role in what became a dangerous threat to our democracy and freedom," Simon & Schuster said at the time. 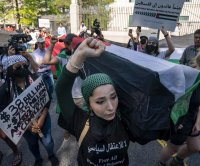 U.S. News // 10 hours ago
North Carolina DA says no charges for deputies in Andrew Brown shooting
May 18 (UPI) -- North Carolina deputies who shot and killed Andrew Brown Jr. during an arrest last month were justified in their actions and they will face no charges, the district attorney announced Tuesday.