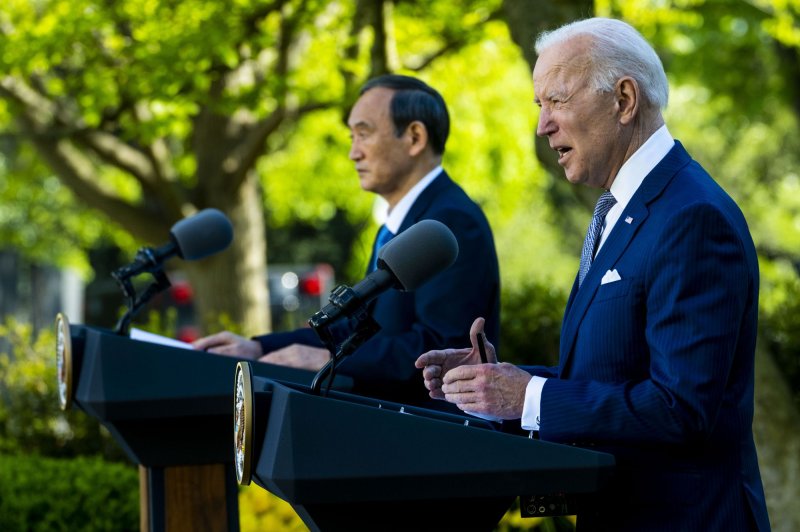 U.S. President Joe Biden and Japanese Prime Minister Yoshihide Suga speak during a joint press conference in the Rose Garden after their meetings at the White House in Washington, D.C., on Friday. Pool Photo by Doug Mills/UPI | License Photo

Chinese telecom Huawei, which was the subject of several restrictions imposed by the former Trump administration, will be a topic of discussion at Friday's summit, officials said. File Photo by Stephen Shaver/UPI | License Photo

April 16 (UPI) -- President Joe Biden on Friday said he and Japanese Prime Minister Yoshihide Suga reaffirmed the two countries' alliance and spoke at length about challenges from China in the first foreign leader visit to Washington, D.C., of the new administration.

The two gave a joint news conference in the Rose Garden after having expanded bilateral discussions at the White House.

"We are two important democracies in the Indo-Pacific region and our cooperation is vital ... to meeting the challenges facing our nations, and ensuring the future of the region to remain free and open and prosperous," Biden told Suga during the bilateral meeting.

During the news conference, Biden said the two discussed challenges from China in the East China Sea and South China Sea, and North Korea.

RELATED Moon, Biden to hold summit in Washington next month

"We agreed to oppose any attempts to change the status quo by force or coercion in the East and South China Seas and intimidation of others in the region," Suga said. "At the same time, we agreed on the necessity for each of us to engage in frank dialogue with China, and in so doing, to pursue stability of international relations, while upholding universal values."

Biden said he United States and Japan plan to invest in technology together, including supporting 5G cellular networks that are alternatives to the network of Chinese telecom Huawei.

U.S. firms have been barred from buying Huawei components and the company was blocked from buying U.S. technology under a national security policy imposed by former President Donald Trump. Biden's administration has not said whether it will keep the bans in place.

Earlier this week, Biden said the United States needs to "shore up American competitiveness to meet the stiff competition" from China.

Recent Chinese military flights in Taiwan's airspace also were expected to be a topic of discussion, a senior administration official said ahead of the meeting.

"Neither country is seeking to raise tensions or to provoke China," the official said. "But at the same time, we're trying to send a clear signal that some of the steps that China is taking ... its fighters and bombers, flying them into Taiwan's airspace is antithetical to the mission of maintaining peace and stability."

Tensions between Japan and South Korea were also expected to be topics at Friday's summit.

"The political tensions are such that we believe it actually impedes all of our abilities to be effective in Northeast Asia, and I think the president will want to discuss this in some detail with Prime Minister Suga," the official said.

Suga was is scheduled to meet with Vice President Kamala Harris at her residence during his visit to Washington.