Oracle argued unsuccessfully that Google application language for Android contained coding that was too similar to its Java API. File Photo by John Angelillo/UPI | License Photo

The ruling settles a long-running dispute between the two technology giants.

The court ruled by a 6-2 vote that Google's use of limited Java elements "constituted a fair use" of Oracle's Java application programming interface, or API.

"Google copied only what was needed to allow programmers to work in a different computing environment without discarding a portion of a familiar programming language," Justice Stephen Breyer wrote for the majority.

The ruling is a big win for Google, which had been fighting Oracle for more than a decade.

Oracle wanted to enforce copyright over 11,500 lines in Android's code base. Google argued that it created its API's independently, while Oracle said there was a clear equivalent to Java APIs.

Oracle contended that the "structure, sequence, and organization" of Android APIs was so similar that it violated Java copyright.

A federal appeals court sided with Oracle in 2018, as did Justices Clarence Thomas and Samuel Alito on Monday.

"The court reaches this unlikely result in large part because it bypasses the antecedent question clearly before us: Is the software code at issue here protected by the Copyright Act?" Thomas and Alito wrote in their dissent.

"The majority purports to assume, without deciding, that the code is protected. But its fair-use analysis is wholly inconsistent with the substantial protection Congress gave to computer code."

Justice Amy Coney Barrett was not part of the court last October when it was argued and did not vote in the decision. 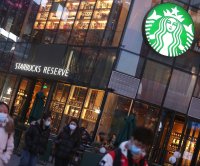 U.S. News // 16 minutes ago
Starbucks permanently pulls presence from Russia due to war in Ukraine
May 23 (UPI) -- Coffee behemoth Starbucks announced on Monday that it's exiting the Russian market -- and ending a 15-year relationship -- over the bloody war in Ukraine.