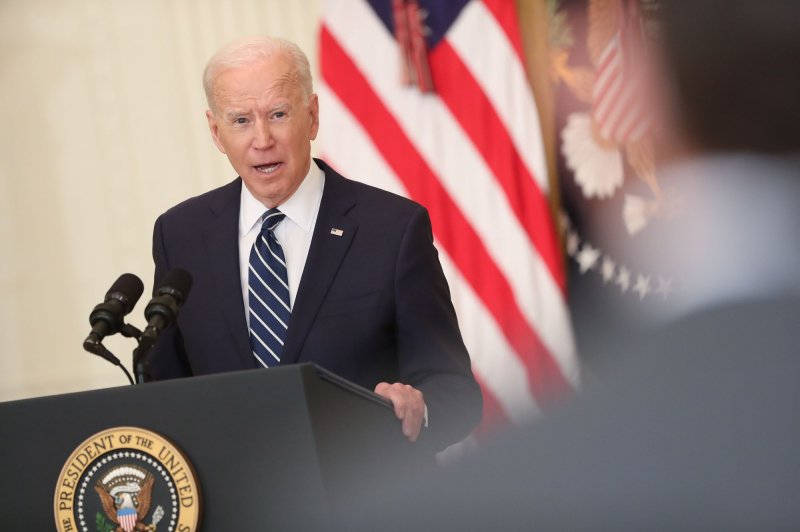 President Joe Biden delivers remarks Thursday during the first formal press conference of his presidency in the East Room of the White House in Washington, D.C. Pool Photo by Oliver Contreras/UPI | License Photo

He made the announcement during the first full news conference of his presidency.

"By my 100th day, we will have administered 200 million shots in people's arms," he said from the East Room of the White House.

"I know it's ambitious -- twice our original goal -- but no other country has come close ... to what we're doing."

Earlier Thursday, the White House announced that an additional $10 billion will be spent to expand access to COVID-19 vaccines and build confidence in the most vulnerable U.S. communities.

Biden also told reporters he plans to run for re-election in 2024 with Vice President Kamala Harris as his running mate.

"The answer is 'yes.' My plan is to run for re-election. That's my expectation."

RELATED Equal Pay Day: Megan Rapinoe says she and her teammates are 'devalued'

The news conference opened with several questions concerning the Biden's administration's handling of the rising number of migrants attempting to cross the U.S.-Mexico border now that many of former President Donald Trump's immigration policies have been rolled back.

More than 70,000 migrants were expelled at the border during February, Biden's first full month in office, after a federal judge blocked Biden's order to pause deportations to allow time for a review period.

Still, thousands of unaccompanied children are being housed in overcrowded facilities -- something Biden called "totally unacceptable."

"We're going to be moving a thousand of those kids out quickly. I've been working to try to find additional access for children to be safely housed."

On Wednesday, the Pentagon said it approved the Department of Health and Human Services' request to transport many of the children to dorm and housing facilities at Joint Base San Antonio and Fort Bliss near San Antonio, Texas.

Biden said his administration has focused on increasing the use of a program to attempt to reach unaccompanied children's family members inside the United States as quickly as possible. Many of the children, he said, come across the border with U.S. phone numbers written inside their clothing and part of the effort requires ensuring the numbers belong to genuine family and friends and not traffickers.

Asked whether his efforts to roll back Trump policies have led to the influx at the border, Biden said families are taking the "desperate" action to send their children on the journey alone because of problems in their country, not because he's a "nice guy." He said he won't let the children stay alone on the Mexican side of the border to starve.

Biden said he wants to focus on the issues that cause migrants to leave their home countries in the first place.

On foreign policy, Biden said North Korea violated a U.N. resolution when it launched two ballistic missiles into the Sea of Japan on Wednesday.

"There will be responses if they choose to escalate," Biden said, adding that he's "prepared for some form of diplomacy, but it has to be conditioned on the end result of denuclearization."

On relations with China and Russia, Biden pointed to an ongoing battle between democracy and autocracy. He called for China to "play by international rules -- fair practices, fair trade."

He said his plan to deal with China is to increase investment in American workers and science, to become more competitive in terms of medical and technological research.

Administration officials met for the first time last week with counterparts from Beijing in Anchorage, Alaska, during which they traded barbs on issues like human rights, cybercrime and China's regional reach.

Biden said he plans to work against Republican efforts to restrict voting rights across the country -- making it harder for people to get to polling locations outside work hours and limiting voting by mail.

"What I'm worried about is how un-American this whole initiative is. It is sick. The Republican voters I know find this despicable."

Biden was expected to address gun control after two mass shootings in less than a week in Georgia and Boulder, Colo., killed 18 people. He sidestepped a question about the issue to instead talk about U.S. infrastructure, saying simply "it's a matter of timing."

With Democrats holding a one-vote majority in the Senate, Biden will need to find Republican support for reform -- or Democrats need to do away with the filibuster.

He said Thursday he supports returning to the talking filibuster, requiring senators to "stand and talk and talk" before breaking down and allowing a quorum and vote.

U.S. News // 4 hours ago
LA Lakers sign deal with food company Bibigo for new jersey patch
Sept. 21 (UPI) -- The NBA's Los Angeles Lakers are replacing the sponsorship patch on their uniforms in a deal worth a reported $100 million over five years.