Biden met with Harris, Health and Human Services Secretary Xavier Becerra and Homeland Security Secretary Alejandro Mayorkas as he announced the vice president has been tasked with meeting with the leaders of Mexico and the northern triangle of Honduras, Guatemala and El Salvador, to establish that "there is one single figure dedicated" to the effort of decreasing the number of migrants arriving in the United States.

"There's no question that this is a challenging situation," Harris said at remarks ahead of the meeting. "While we are clear that people should not come to the border now, we also understand that we will enforce the law, and that we also, because we can chew gum and walk at the same time, must address the root causes that cause people to take the trek."

Harris has described the situation at the border as a "huge problem. More than 11,000 unaccompanied minors are in the care of health and human services and the administration has struggled to process children through customs and border facilities, with many being held beyond the 72 hours established in U.S. law.

Biden on Wednesday said the influx of migrants at the border was a result of former President Donald Trump's immigration policies but said it is his administration's "responsibility to deal with it humanely and to stop what is happening."

He said Harris is "the most qualified person" to lead the efforts to coordinate with Mexico and the northern triangle.

"When she speaks, she speaks for me, doesn't have to check with me," he said. "She knows what she's doing and I hope we can move this along."

On Tuesday, the Department of Health and Human Services sent a request to the Pentagon to house migrant children at a vacant dorm at Joint Base San Antonio and land at Fort Bliss near El Paso, Texas.

Roberta Jacobson, special assistant to Biden and coordinator for the southwest border, also traveled to Mexico this week, while National Security Council President Juan Gonzalez was sent to Guatemala.

U.S. News // 21 minutes ago
U.S. added 210,000 jobs in November -- less than half the number expected
Dec. 3 (UPI) -- The U.S. economy added a little more than 200,000 jobs during the month of November, the Labor Department said in its monthly assessment Friday -- roughly half what most analysts expected.

U.S. News // 7 hours ago
NYC mandates COVID-19 vaccine for nonpublic school employees
Dec. 2 (UPI) -- New York City on Thursday mandated that all workers at yeshivas, Catholic schools and other private schools must receive at least one dose of a COVID-19 vaccine by Dec. 20.

U.S. News // 9 hours ago
U.S., EU hold high-level meeting on countering China
Dec. 2 (UPI) -- The United States and the European Union held their second high-level meeting concerning China as the two sides attempt to foster a united policy to confront and work with the Asian nation amid growing tensions. 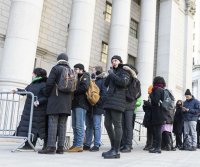